One day every 100 years, the village of Brigadoon appears in the Scottish Highlands. Two American tourists stumble upon the town and one of them, Tommy, falls in love with a village girl named Fiona. But can he believe in the town and stay with his love? His companion, Jeff, is a cynical New Yorker who is not drawn into the romance of the village and has a hard time believing the story. There’s a traditional wedding, a very unhappy villager who wants to leave, and a village girl who tries hard to entangle Jeff. Agnes de Mille was hired as choreographer and she created dances with elements from traditional Scottish folk dances to enhance the mood of the village. Lyrics & libretto by Alan Jay Lerner, Music by Frederick Loewe.
https://www.ibdb.com/broadway-production/brigadoon-1534
https://www.youtube.com/watch?v=VWovBKmvf5Y (these clips of a special 2017 performance will give you the flavor and mood of the show) 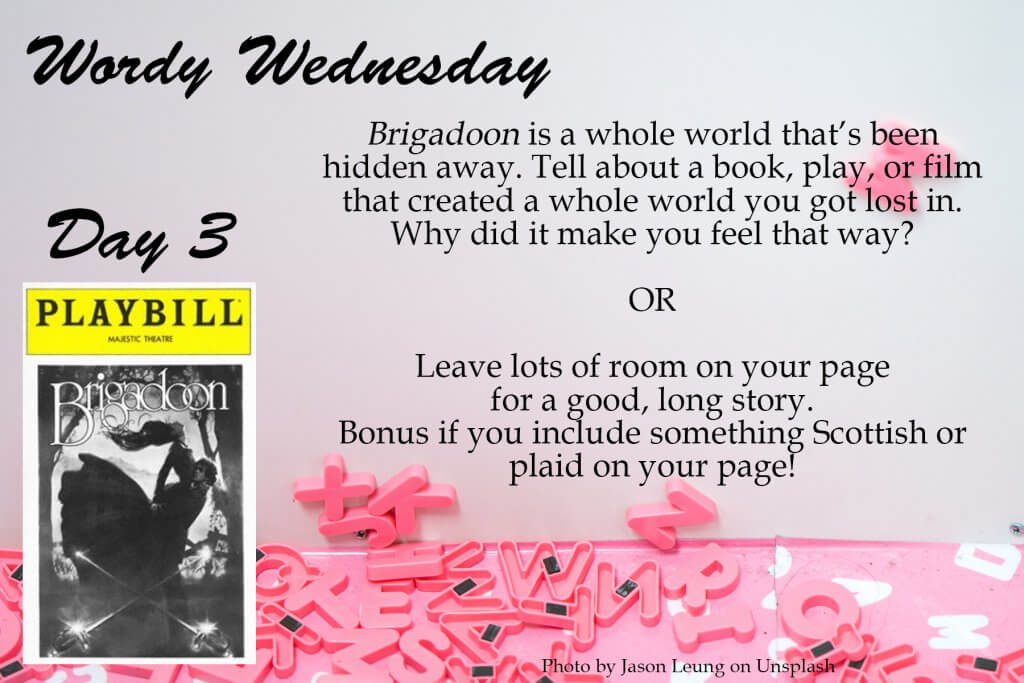 While being unfamiliar with Brigadoon, I loved the idea of a hidden world. Actually, it relates perfectly to one of my favourite book and movie series, Harry Potter by J.K. Rowling. As the prompt suggested I knew I’d need plenty of room for journaling so I made a pocket behind my photo for a 3″ wide strip that is 12″ long and folded. I had so much to say I wrote on both sides, and could probably have used much more space!

I also used some paper that showed a book sitting open. This paper really had a dark, Harry Potter vibe, and I used golden stars and some crystals to emphasize the magic pouring out of the pages.

For my photo I found a photo of our family at the village of Hogsmeade at the Magical World of Harry Potter at Universal Studios. We are in front of the Honeydukes candy shop, which was just one of the places in the story that was described with such incredible description in the books that visiting the shop really was like walking into a dream.

While I didn’t include any plaid, it’s been surmised that Hogwarts Castle is located somewhere in Scotland, so I think that kind of counts as to including the second part of this prompt too!

If you’d like to see more details and read the journaling it’s available on my blog: Scrapbook Wonderland.