Guys and Dolls has music & lyrics written by Frank Loesser, and is based on short stories by the newspaperman, Damon Runyon. Runyon’s stories of people living in New York encompass a wide swath of characters, but the play is based mostly on two stories. It concerns the love story between a high-flying gambler named Sky Masterston, who takes a bet to make a Mission worker named Sarah Brown fall in love with him. The other is the long-running love story between a famous owner of a craps game named Nathan Detroit, and his long-suffering fiancée, Adelaide, who sings in a nightclub. The show was wildly popular and is considered one of the great musical comedies of the 20th century for its tight pacing and originality. This musical won five Tony Awards, including Best Actor for Robert Alda, who originated the role of Sky Masterston. Robert is the father of award-winning actor, Alan Alda.
https://www.ibdb.com/broadway-production/guys-and-dolls-1892
https://www.youtube.com/watch?v=s7gU_e8wlNE (Broadway revival cast singing “Sit Down, You’re Rockin’ the Boat”, Live at the 2009 Tony awards) 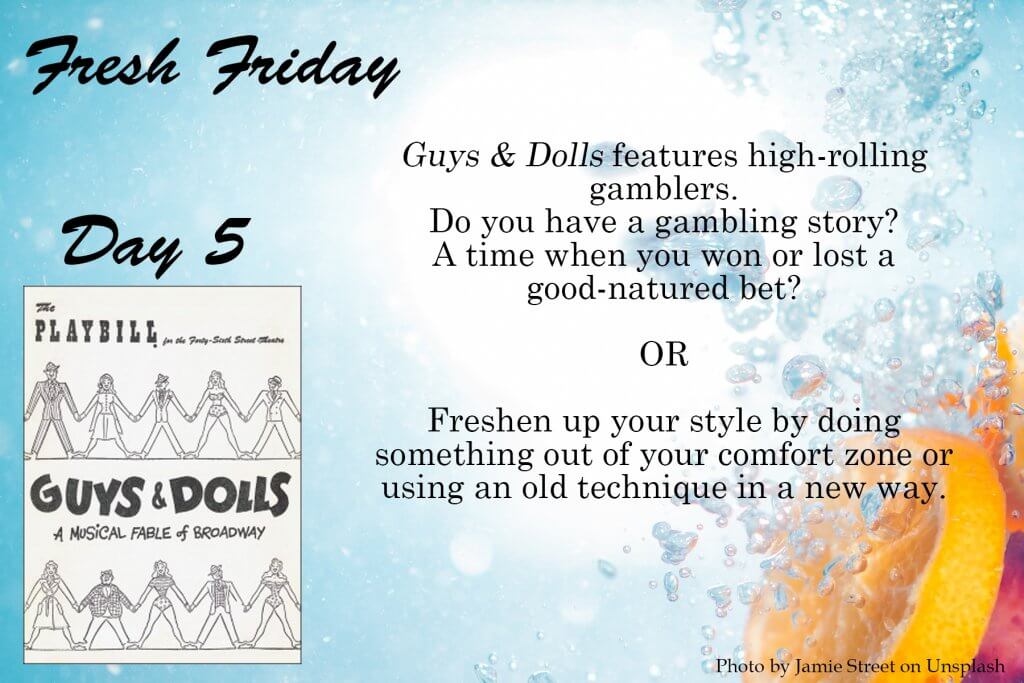 “At first, I had no ideas for this gambling prompt and sadly, I have never seen Guys and Dolls. I reached out to my kids to jog my memory of any “fun”family bets. My daughter came to the rescue with this cute story from 2 years ago. I had never documented the “no meat” bet or her choice to cut out beef from her diet permanently. I found a cute photo of her from that year that ironically looks like she is pounding her fist down like in the story. Synchronicity! I found yearbook photos of the boys to add. I decided to create the whole thing in Photoshop and Adobe InDesign because of the technique prompt: “use an old technique in a new way”. This summer, a challenge at SimpleScrapper reminded me that it can be fun to make scrapbook pages look like advertisements or magazine spreads and since Graphic Design was my career years ago, I used my “old” skills to tell a “new story.”

Title: “Bet! A Tiny Tale of a Teenage Wager”

At the lunch table in school one day during her Freshman year, Elyse (15y) was having a discussion with her friends about her one challenge in following through on her choice to remove beef from her diet: real Philly Cheesesteaks. “Not eating meat would be easy”, bragged Allan. “Actually it’s not,” Elyse said.“And I don’t think your football coaches would like the idea.” “No sweat!he continued to boast. So, she slammed her fist on the table and declared, “BET!” in the way that she heard the guys challenge each other from time to time. Gavin chimed in, “I’ll do it too!” The agreed upon terms were: not eating any meat for as long as possible during school hours so they could keep each other accountable. But fish and eggs were ok. The one who lasted the longest got $20 from the loser(s). Of course, at just about a months time, Gavin, and then Allan, forgot they weren’t supposed to eat something like bacon and both lost the bet. Even though the boys never paid up the entire $20, Allan latertried to make it up to her by buying her a piece of pizza. In retrospect, Elyse says, “The satisfaction of knowing I won because I stuck to my goal is all that matters.” It has been more than two years since she’s eaten beef. 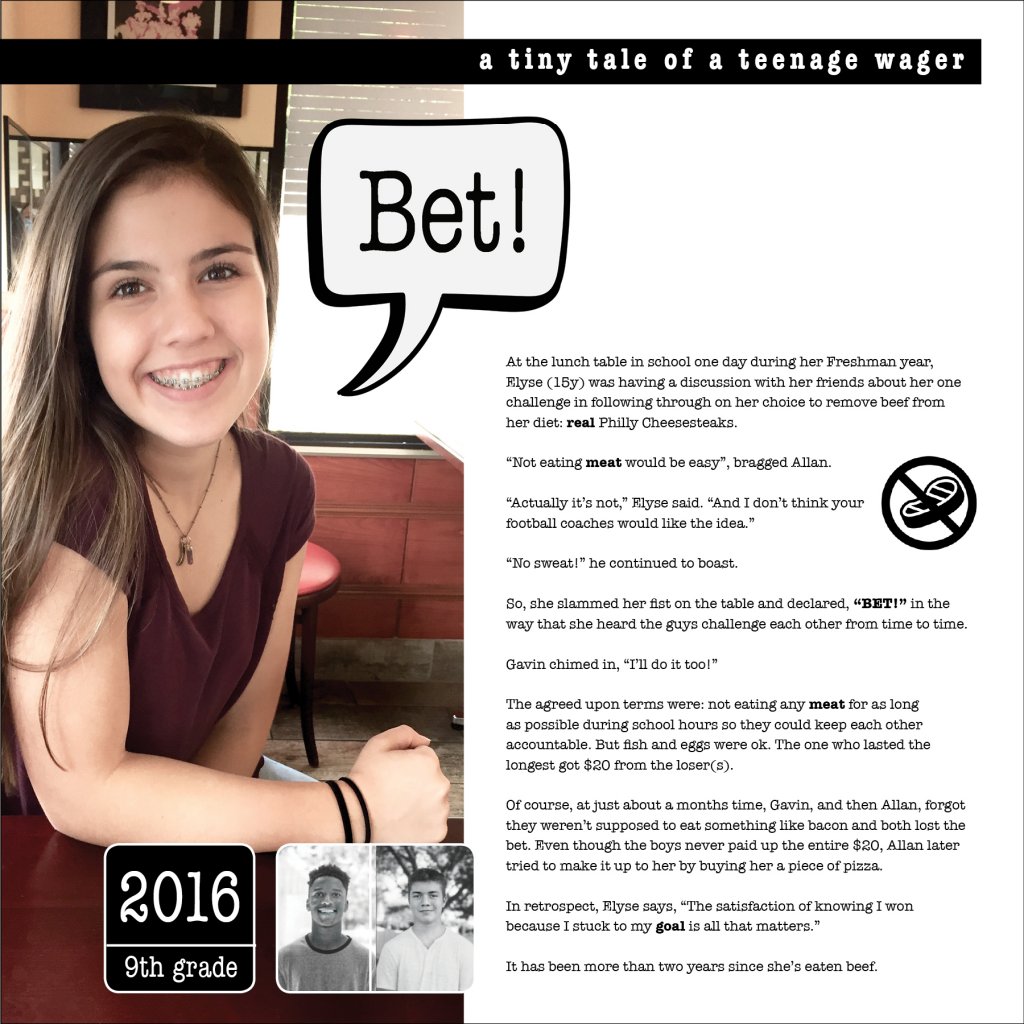