The King and I is based on the true story of Anna Leonowens’ experiences as an English governess to King Mongkut of Siam in the 1860’s. The brilliant actress, Gertrude Lawrence, convinced Rodgers & Hammerstein that it would be the perfect material for a musical starring herself, and they set to work. It opened in 1951 and she played Anna to sold-out audiences until her death from cancer in September of 1952. The role of the King was played by a virtually unknown actor named Yul Brynner, who so totally dominated the role that it is forever tied to him. He played the role on Broadway and in many touring productions, so by the time he retired from the role in December of 1984, he had played 4,625 performances. The show itself is unconventional in that it has two leading characters with no kiss or love scene, the death of a star performer on stage, and a cast consisting almost exclusively of people of color, with only four roles being English or American. It won five Tony Awards and was adapted into a popular film starring Yul Brynner.
https://www.ibdb.com/broadway-production/the-king-and-i-1935/
https://www.youtube.com/watch?v=QgVPnWmUqd4 (Shall We Dance? from the film to see Yul Brynner; Deborah Kerr does not do her own singing but is dubbed by Marni Nixon who sang in many well-known movie musicals of the time and was finally recognized & honored late in her life) 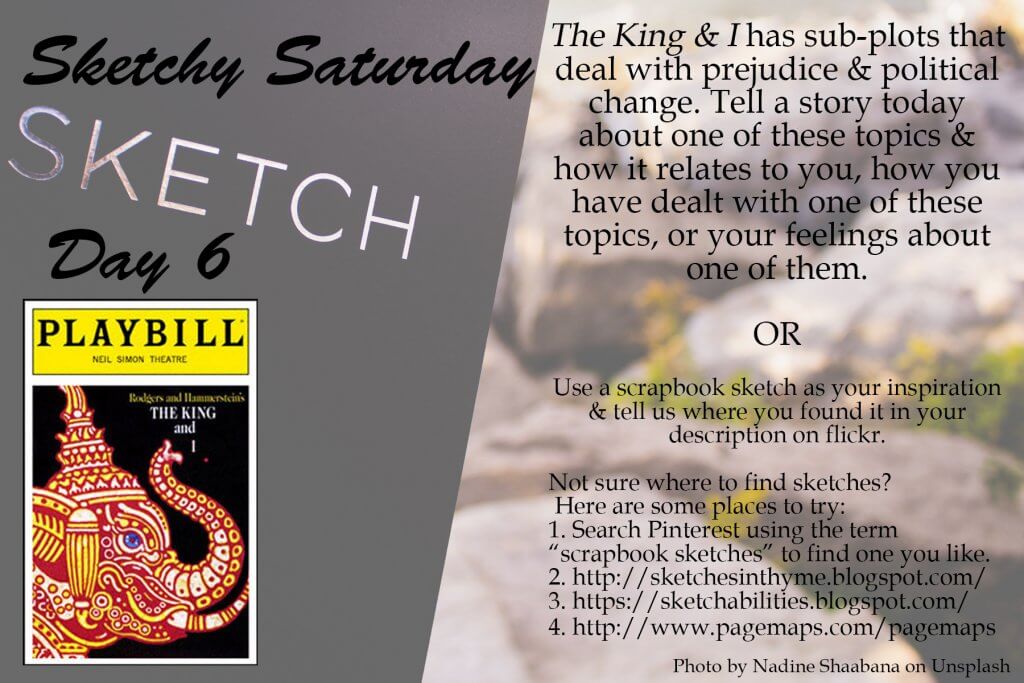 The prompt for today is the Broadway smash hit “The King & I”. This show, and later the movie, is one of my very favorite musicals. Although the story deals with politics, prejudice, and breaking or keeping traditions, my first thought after reading the prompt had little to do with most of those themes. It was of the King’s wives dressed in their huge European style hooped skirts laying on the floor bowing to him. A change of clothing that required a change of tradition for the duration of the English Dignitaries visit.

This scene immediately brought to mind the mini photo shoots we had on our front lawn when my daughter (Caitlin-in purple) and her friend decided to celebrate their Junior Prom their own way. They decided paying for a ticket to the Junior/Senior Prom and then spending the evening just standing around was not a financially practical way to enjoy the evening. Since neither of the boyfriends is a dancer they decided to do something more fun.

The girls wore their prom dresses for pictures at our house and then the couples went to a fancy restaurant for appetizers. After sharing some yummy Thai snacks, they headed to the bowling alley, changed out of their prom dresses and fancy clothes, ate pizza, bowled and played laser tag.

They had a blast and spent less on their evening of entertainment than one couple would have spent for a prom ticket and dinner. Their Faux Prom night was the talk of school the next Monday and many of their friends confessed they wished they had gone bowling or somewhere else because they did not feel the price for the prom was a good value.

Caitlin and Elise broke with tradition by planning their own “Prom Night” and changed the way several of their friends see the event. I can’t wait to see what they do for their Senior Prom in April 2019.

For this layout I dug into my stash and used Mulberry paper layered over patterned paper. Then I added a piece of die cut swirly paper over one side of the page and mis-matched chipboard letters for the title. The flower bouquet is layered on top of a vertical row of fan-folded paper strips (I used the brand strips off of several papers for this.) The strips of fan-folded papers make a nice foundation for the stack of flowers and leaves.I also used a journal spot to tell the story and the date of the Faux Prom.

Because I knew exactly which photos I wanted to use for this layout I actually built the majority of the page before I was able to pick up the photos from the local Walgreens photo lab. Then, once I did have the pictures, everything came together exactly as I had seen it in my mind’s eye. Ironically, this is another “breaking with tradition” as I have never created a page with so much detail without having the photos in hand. It was so much fun! Alice-Thank you for the opportunity to play! 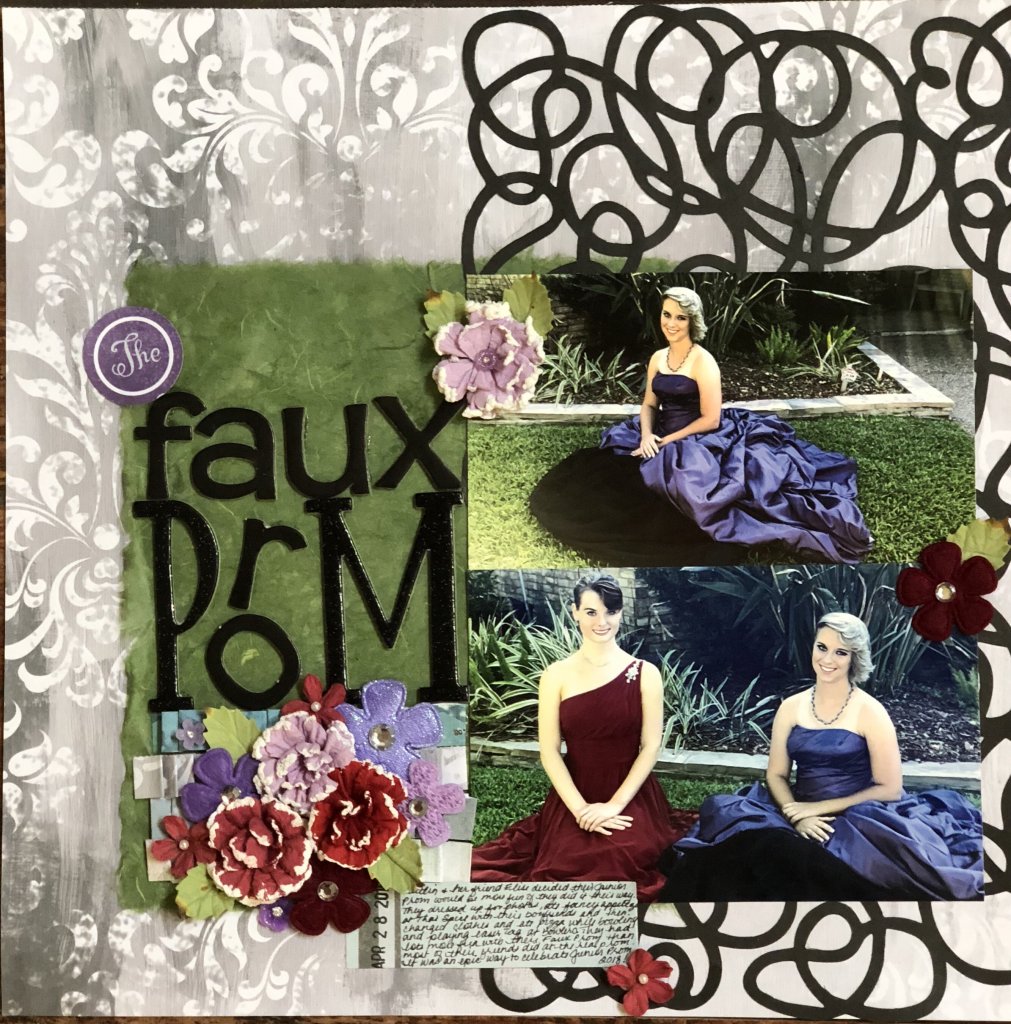