Camelot was Lerner & Loewe’s follow-up to their wildly successful My Fair Lady and had the largest advance ticket sale in Broadway history to that time. This pre-opening buzz was based on the musical team and the two leads: Richard Burton and Julie Andrews. The play is based on T.H. White’s novel, The Once and Future King, which offers a new version of the King Arthur legends, and the huge amount of source material from the large novel made some critics call it a little disjointed. But the performances were stellar and the role of Lancelot created a matinee idol in Robert Goulet, whose compelling voice and charming performance made him an enduring presence. Many of the songs have also become popular favorites and the play received four Tony Awards, including a Best Actor for Richard Burton who surprised audiences with his singing and dancing prowess.
https://www.ibdb.com/broadway-production/camelot-2275/
https://www.youtube.com/watch?v=SjIVSVGMWEk (original cast members Richard Burton & Julie Andrews sing on the Ed Sullivan Show) 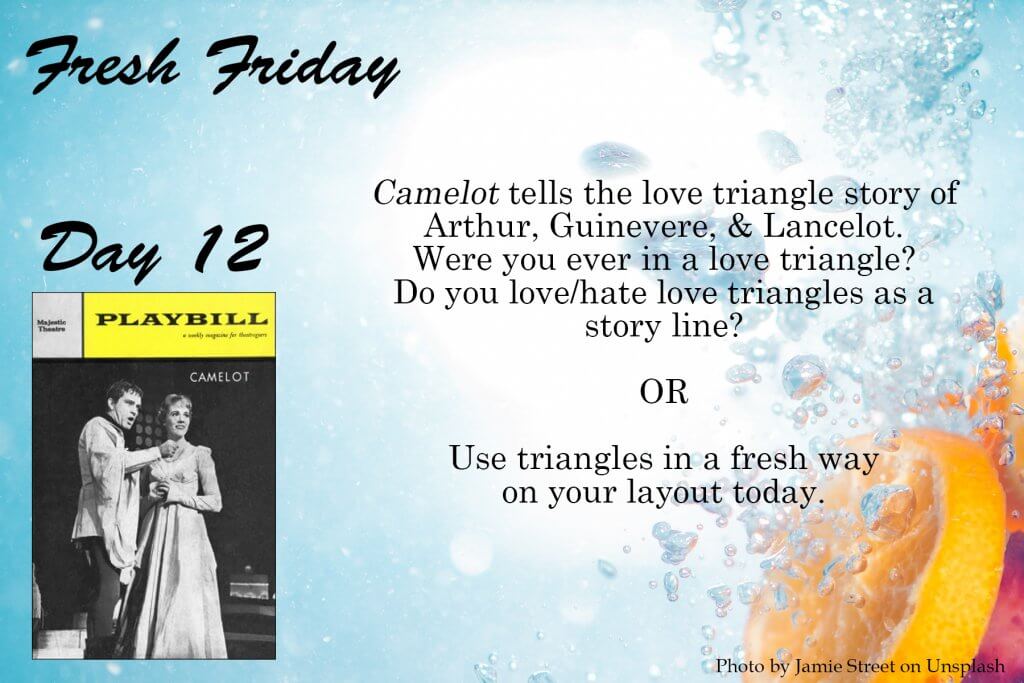 When I got this prompt, I thought to myself, there are two ways to do this.  There is the obvious, my dogs, Henry & Fergie, and me.  Henry loves me.  Fergie loves Henry.  It’s a problem.

Then there was the hard one.  My mom, my dad, and his affair become wife Andrea.  I decided to go the hard way.  Even when my parents divorced in 1990, it was something I didn’t understand.  I don’t understand now, and I am still a bit bitter about the whole thing.

My dad and Andrea have been in a relationship since I was 12.  My mother didn’t learn about the affair until I was 16.  I found out much, much later.  I was in the dark.  My mom shared with my sister, but not with me.   This woman showed up in my life without introduction, explanation, or discussion when I was 23.

I’ve never documented this story… And, there is so much more to tell…  But lately, I’ve been trying focus more on my family, and my dad in particular.  This is the only picture I could find with my mom, dad, and Andrea in it.  It’s August 2010.  What a love triangle.

I also tried to use triangles in a fresh way.  I thought about broken glass, kinda like the broken family.  I was going to make the shards blue, but when I put the white on white, it was so stark, and perfect with the black and white photo.  The red tab shows the bit of blood for the pain, and the silver is the reflections from the glass, reflecting the things I need to work on.  I think it works. 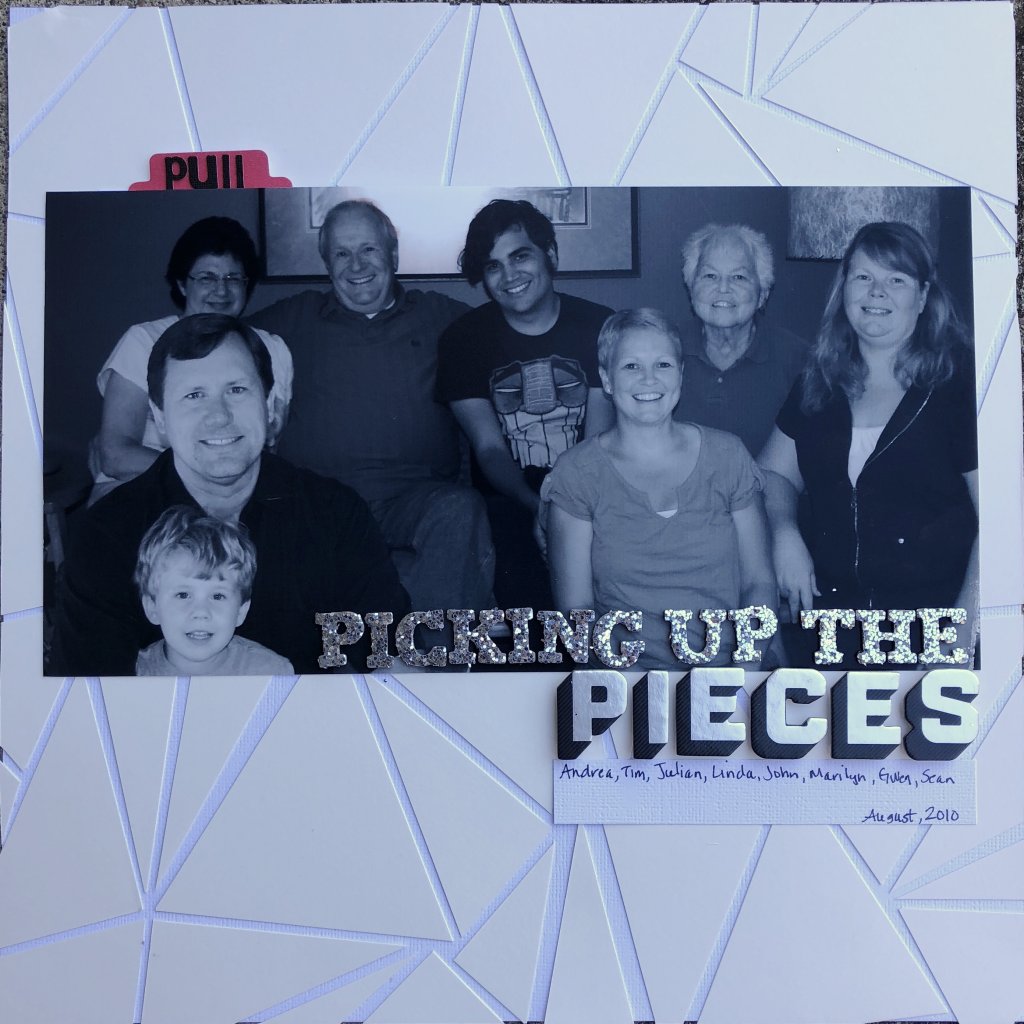 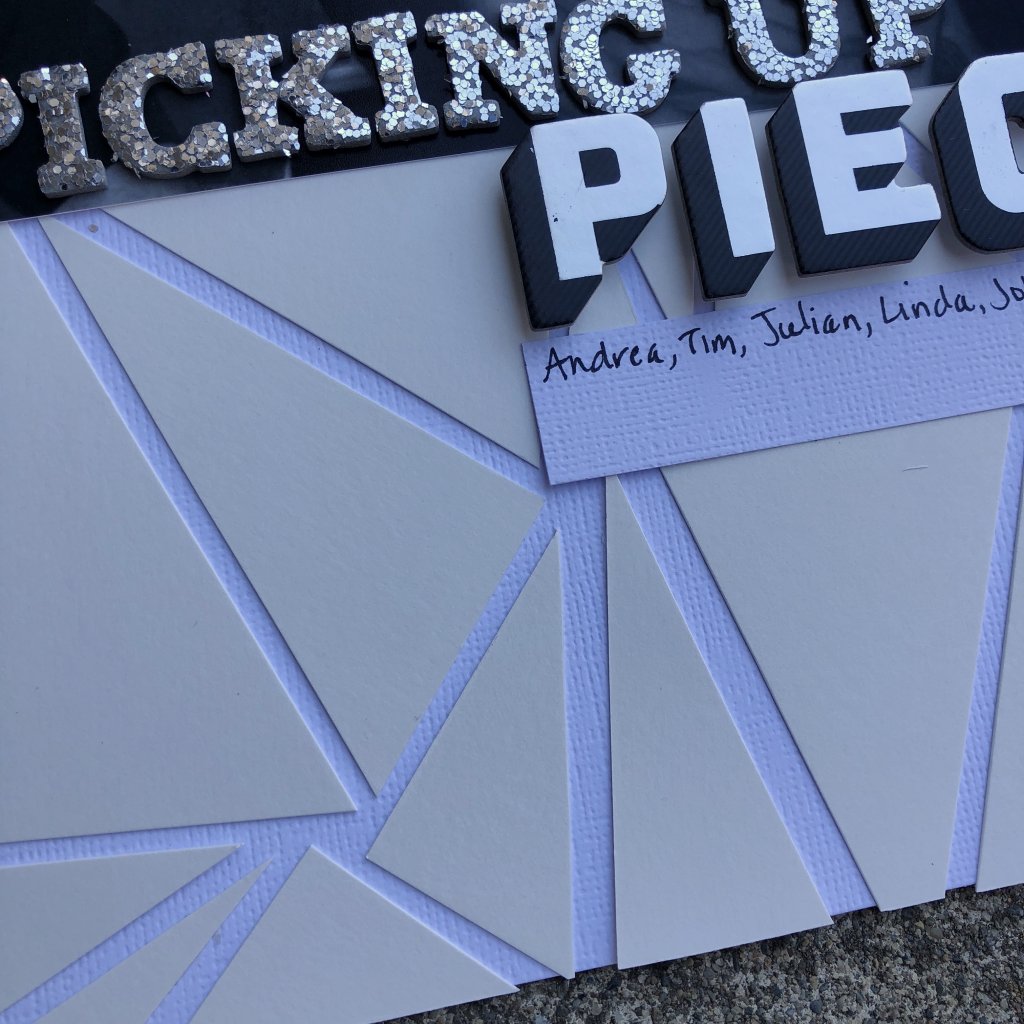 In the early 1980’s my dad went to Wayne State University to get his Masters in Business Administration.  It was there that he met Andrea White Stahl.  There was an immediate attraction, and the two of them began seeing each other romantically…  Even though the two of them were still married to other people…  Even though dad had Marilyn and I, both not yet teenagers…  Even though Andrea had Jason, around 2, and did not yet have Rebecca.  She would later call Rebecca her “love child” with my father, although he couldn’t have been the father, as he had a vasectomy. Their children, and the impact of this relationship to their families, had no bearing on their decision to continue their affair.

In 1984, my dad was offered a position in California.My mother also found letters from Andrea confirming the affair in our house.It was decided that we would leave Michigan to give my parents the opportunity to rebuild their relationship, as well as to give us a better life.Andrea continued to send letters every day to my dad’s office in California, rather than to his office in Michigan.My mother found these new letters when she went to pick up the forwarded mail at my dad’s new office.It was a crushing blow.Andrea then moved her entire family to California, her then husband, her elderly parents, and her small children.

When my sister graduated from high school, my mother left my father, and moved back to Michigan.My dad lived by himself for awhile, while Andrea divorced her husband.They married in 1992.

They are both very strong willed people.  They fight often.  They yell and scream at each other.  There has been many a time I thought my dad would leave Andrea.  And he has, just to prove a point, but then he goes right back.  After all these years, she still pisses him off, but he still stays.  I can’t figure it out.  But this relationship has defined my family, and broke it.  And try as we might, I don’t think we will ever be able to pick up the pieces. 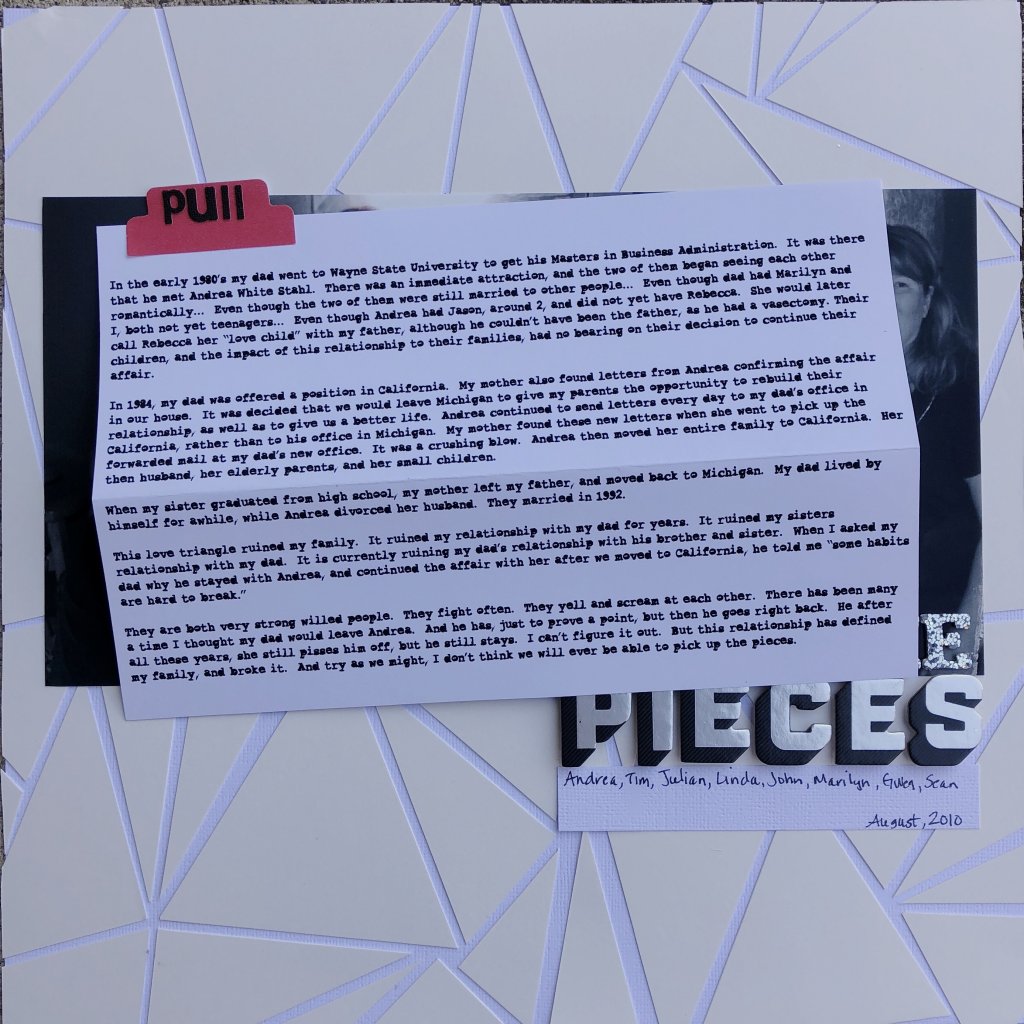