Funny Girl is based on the real-life rise to stardom of Fanny Brice, who became a star of the Ziegfeld Follies and later, radio. The musical was produced by the son-in-law of Fanny and Nick Arnstein, who decided that none of the songs Fanny was known for in real life would be included in the show. Therefore, her signature song “My Man” did not appear in the musical but was included in the later film. Barbra Streisand’s performance in Funny Girl catapulted her to stardom and the theatre became standing room only. The first act closes with Fanny telling the world defiantly “Don’t Rain on My Parade”, and the show closes with her singing it in reprise in a more melancholy but hopeful fashion. This song, plus “People”, became popular hits for Streisand, who also starred in the film version. Music by Jule Styne, lyrics by Bob Merrill.
https://www.ibdb.com/broadway-production/funny-girl-3054/
https://www.youtube.com/watch?v=VAdWMAeJ6TY (Barbra Streisand sings “My Man” from the film) 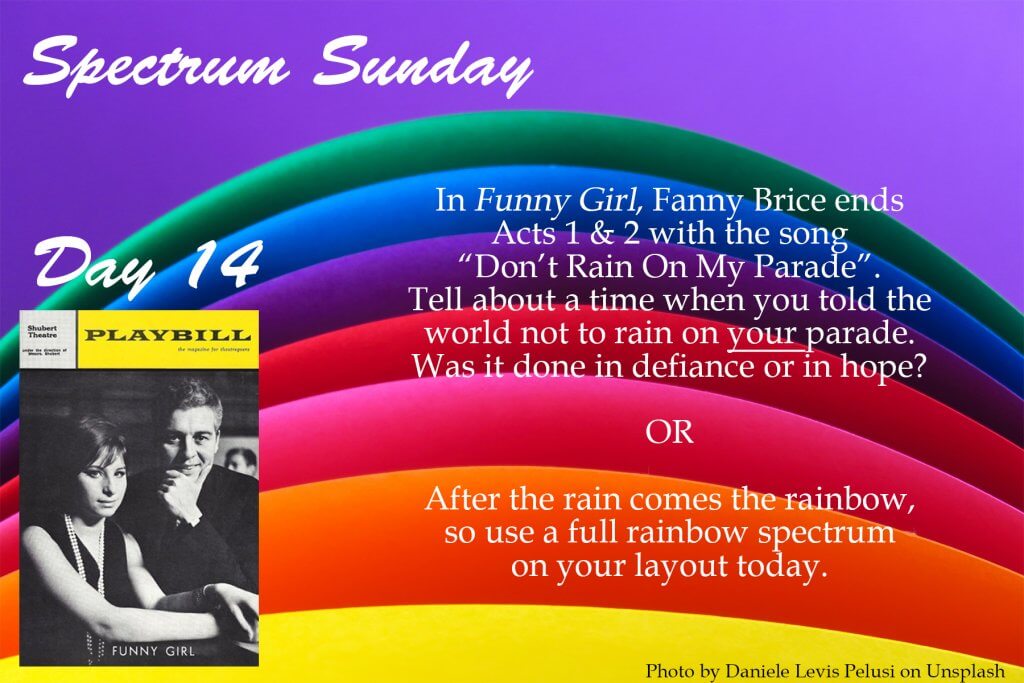 So many, many stories that I could’ve told for this prompt. They were all swimming around my head while I was procrastinating (ahem! ruminating) creating my layout concerning ‘Don’t Rain on My Parade!’. However, for once, my procraftinating paid off in spades! I had been looking forward to this afternoon for at least a week, and since the weather gods had given us a glorious day and the elder two boys were engaged at an Air Cadets event for the entire day, I needed only to convince the youngest that attending the Trail Mix arts event in Exbridge would be a fantastic Saturday afternoon. First, he whinged and said that he’d rather stay in jammies all day. I told him he could do that Sunday. Then he complained that he’d be late meeting his Pokemon friends at our local park for the Chikorita Community Day. I replied that we’d meet them there afterwards and he’d still have over an hour to hunt with them after the Trail Mix, *plus* he’d get to catch Chikoritas at the park where the event was being held (which his other friends weren’t getting to do). Finally, that was enough to convince him to come along (as he’s still too timid to stay home alone, even for an hour or so in the daylight). We enjoy the flautists playing ‘Somewhere Over the Rainbow’, and since rainbows sometimes follow the rain storm/shower, I thought I could weave a story to fit the prompt that way. But once the band that we came to see finished their short set, and we felt the event was over, a young lady who had been on the fence about performing summed up her courage, and I’m so glad that she did! Although I’m primarily a still shot photographer and not a videographer (you can see why should you choose to scan the QR code), I decided to capture a bit of both, and I was thrilled to hear her song choice when ‘the tape’ was already rolling. I, in fact, couldn’t believe my ears! The biggest challenge was then to keep the story to a single pager and yet include all of the feels and details without making it feel too overloaded with photos, journalling, or embellishments.

Journalling reads: The first day of my favourite season – Autumn – was sunny & crisp this year, so I couldn’t wait to get out & enjoy it! Hunter didn’t want to go walking around a park trail & listen to music. ‘Don’t rain on my parade, Dude!’, I said. When we arrived at the park, he wanted to play Pokemon Go rather than enjoying the artists around the trail since it was Chikorita Community Day. ‘Dude, don’t rain on my parade!’ I repeated. When open mic time began, he was cold & wanted to go home immediately. You can imagine what I firmly told him when I wrapped him in our picnic blanket. After Matt Doran & Luxury Tax finished playing, a girl got up to blow us away with her rendition of – you guessed it!
Credits: Template: Dear Friends Designs – All American 3. Design Credits: Sweet Shoppe Designs Collaboration – Don’t Rain on My Parade (yep! really!), the Gingerbread Ladies – Gingerscraps Collaboration: Good Times, and Tracey Monette of Clever Monkey Graphics – Rainy Day. 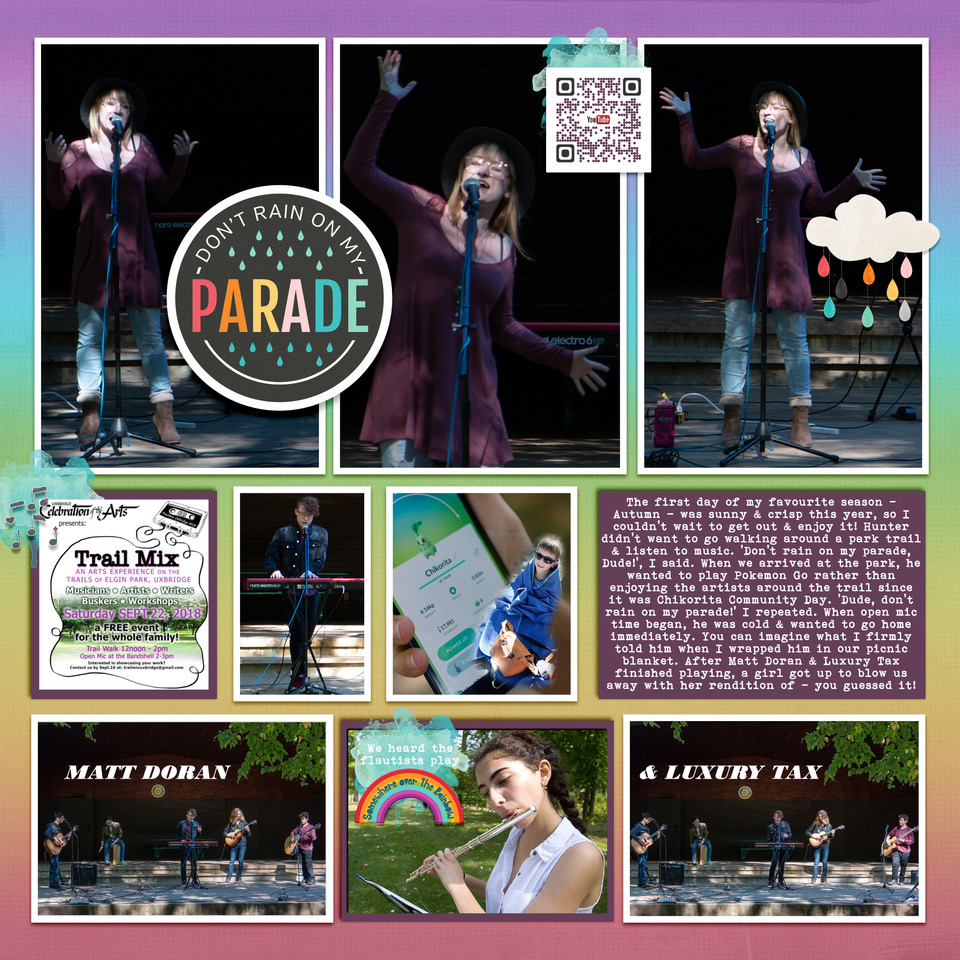