The most widely acclaimed musical of the 1970’s, A Chorus Line was conceived by Michael Bennett, who was also the director and choreographer. Bennett met with 24 dancers and taped their experiences as performers, their backgrounds, problems, and frustrations. These tapes were given to the book writers who crafted a play based on what they heard, then the composer, Marvin Hamlisch, and lyricist, Edward Kleban, were brought in. The setting is a bare stage with large mirrors as the dancers audition for a director who will cut most of them. Along the way, the director asks some of the dancers to talk about their lives, so he can decide amongst them. The story became a universal one of young people struggling for success and overcoming obstacles, and thus became quite popular. It received ten Tony Awards and for the first time in years, ticket scalping on Broadway became popular as ticket sales were so hot for the show.
https://www.ibdb.com/broadway-production/a-chorus-line-3752/
https://www.youtube.com/watch?v=htLGQ3CDODY (original cast performs “I Hope I Get It” at 1976 Tony Awards)

Journaling says: May 1992: It was the weirdest interview I’ve ever had. we barely talked about hte job. Instead, the manager and I ended up talking about our children for almost an hohur. He had a one year old daughter and my son was six months old. I left the business thinking “Well, I’ll never get that job.” But he called me the next day and hired me. So I went and learned about plastics – boxes & tubes…lighting panels & epoxies…made to order display cases, sheets cut to size, & even round tuits. He added a sign shop – I ran it…then left to work for his competitor. We reconnected a few years later – ironically at that same strip mall location. We fell in love. And it started with an interview.

Yes, that’s really the story of how my husband and I met. We’re coming up on our 20th wedding anniversary in a couple of months, so I guess that weird interview worked out pretty well in the end.

I knew the story I wanted to tell, but had no pictures of that time in my life. Google to the rescue! I found a few pics to represent the store and wrote my story. I started my page with a few stitched circles that can now barely be seen, but was a great anchor to my picures. Once I started with the stickers and a few die cut shapes, I knew I needed something else. I started looking through my embellishments and found a box of SUPER OLD acrylic shapes that were just the exact thing this page needed.

My advice: Don’t be afraid to use up old stash! 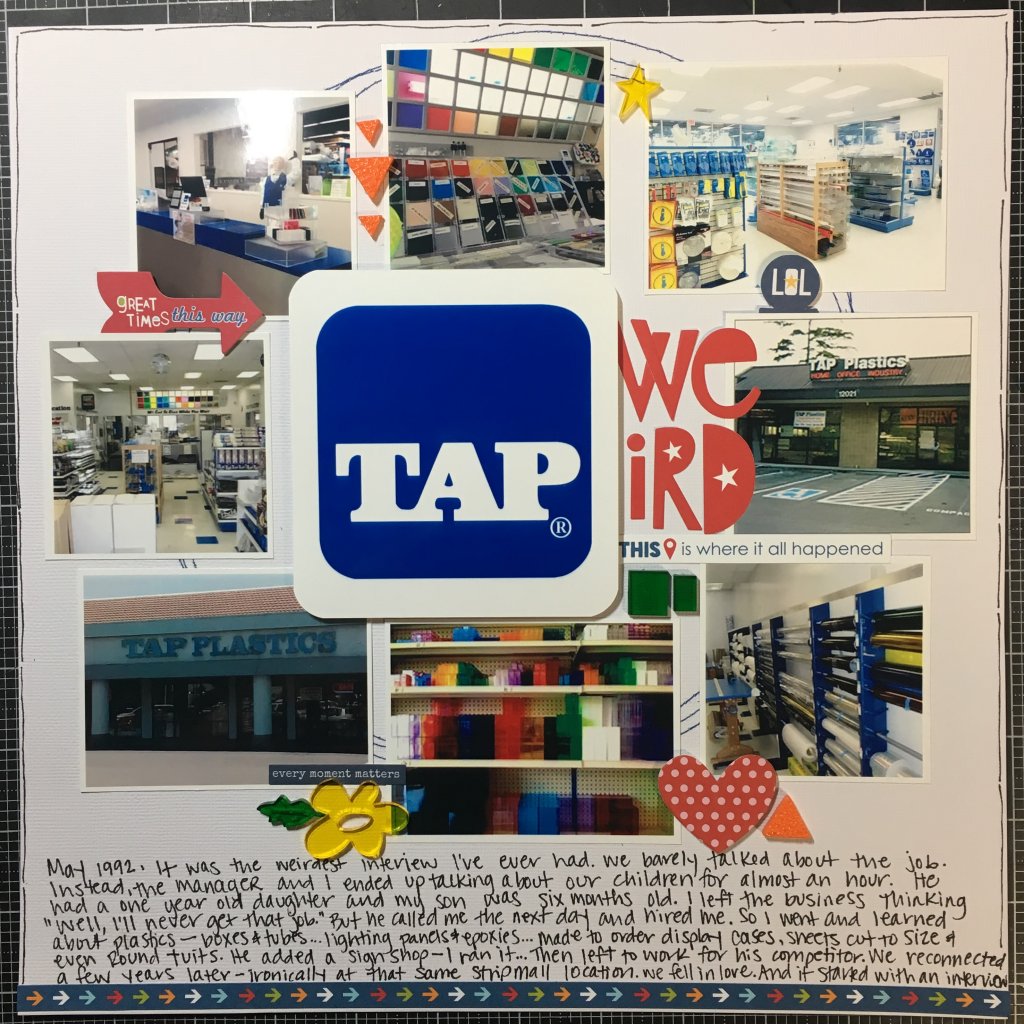 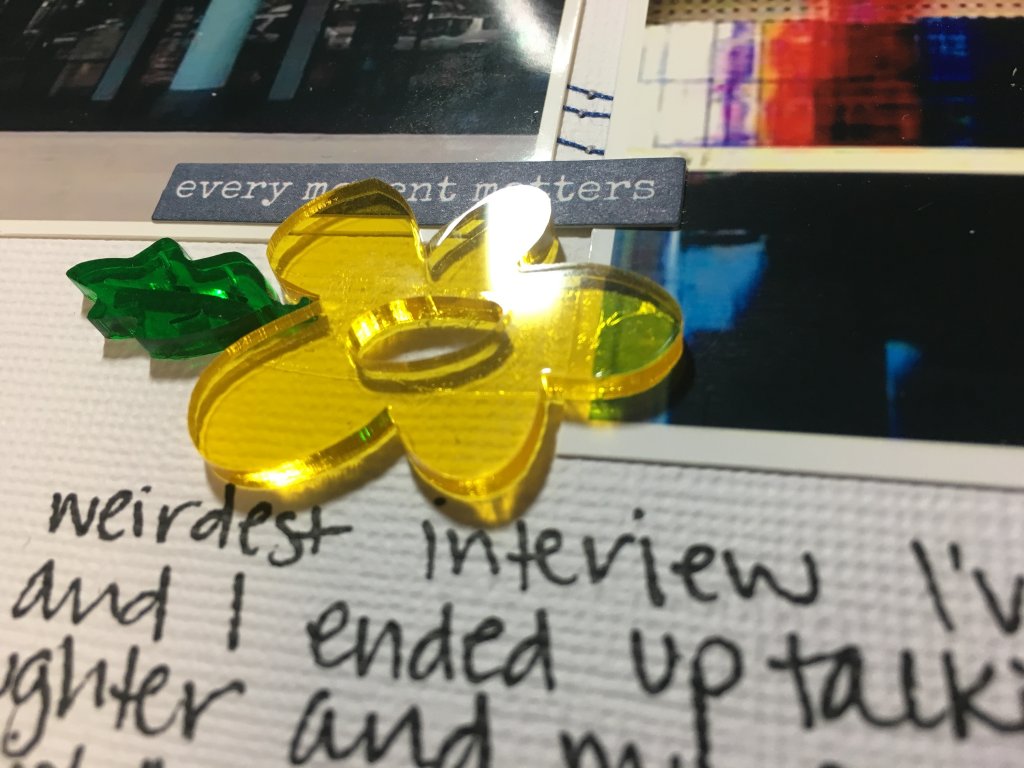 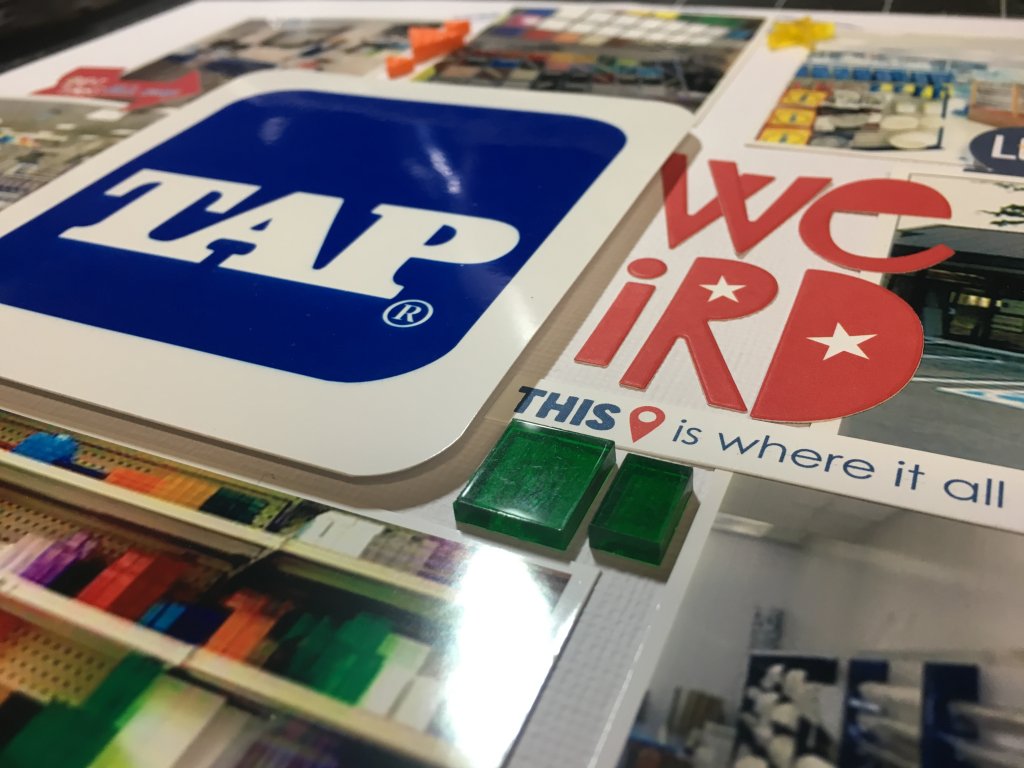