The Lion King is based on the Disney animated film with music by Elton John & lyrics by Tim Rice. It premiered on Broadway at Disney’s renovated New Amsterdam Theater in November 1997 but moved to the Minskoff Theatre in 2006 to make room for the opening of Mary Poppins. It is still running on Broadway and is now the third longest-running show on Broadway behind The Phantom of the Opera and the 1996 revival of Chicago, which are both still playing. It is the highest-grossing Broadway show in history and has touring and production companies throughout the world. The show employs a rule that all productions of the show must have at least six South African performers in the cast. Actress Lindiwe Dlamini grew up in Durban, South Africa and has been with the show for the entire run. You can read about her here: http://www.playbill.com/article/meet-the-woman-who-opened-in-broadways-the-lion-king-20-years-agoand-never-left
https://www.ibdb.com/broadway-production/the-lion-king-4761
https://www.youtube.com/watch?v=GqTuAI75Mgo (Original Broadway Cast-trailer) 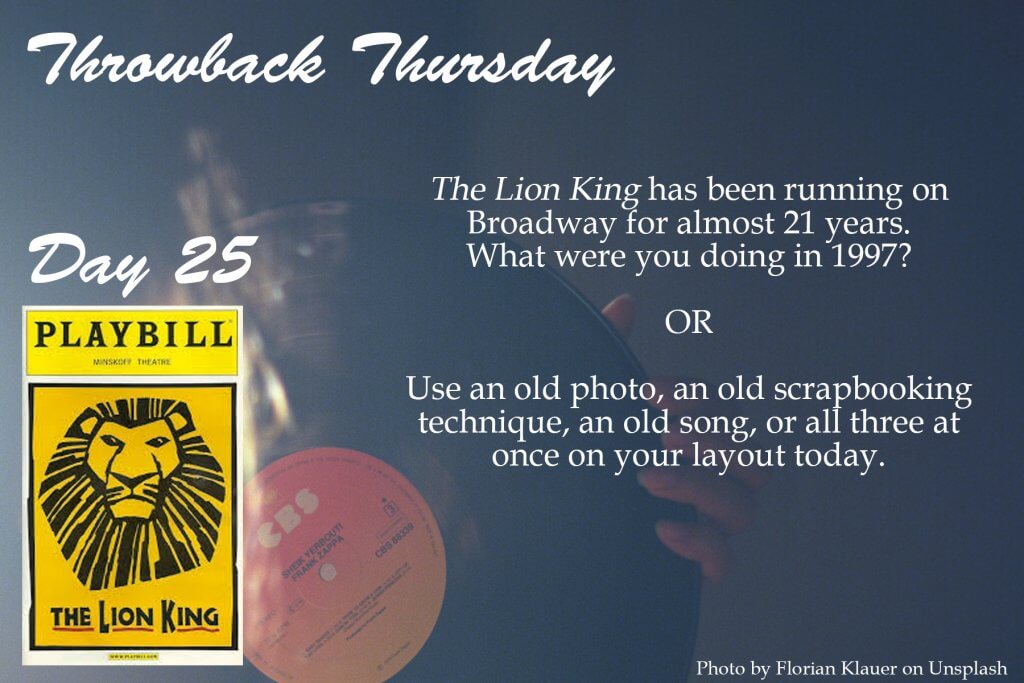 When I first saw the prompt, and realized what day it was, I knew I had to tell this story!  I would say most people in Colorado at the time, at least on the east side of the mountains, has a story or 2 about this blizzard, but I didn’t have any pictures to tell mine.  So I used a snowy picture from a couple of months later, which also has Brad and the Tahoe.  I wanted the background to look a bit chaotic, like a blizzard, and I happened to be watching a Vicki Boutin video, so I used watercolor paper, Vicki Boutin’s Rose Gold Glaze, Distress ink, a couple stamps, a stencil and lots of water for the mixed media background (thus the magnets in the photos trying to flatten it).

Sam & I hadn’t met at the time, but he had stories too, and photos so I decided to make a 2 pager!  It wasn’t my initial plan, so it doesn’t flow as well as it could, but I think it works.

All together I used old photos, an old scrapbooking technique (Double page) and told the story of what I was doing Today, October 25th in 1997. (No song Lyrics because “Let it Snow” and “Winter Wonderland” just didn’t seem to fit somehow.) 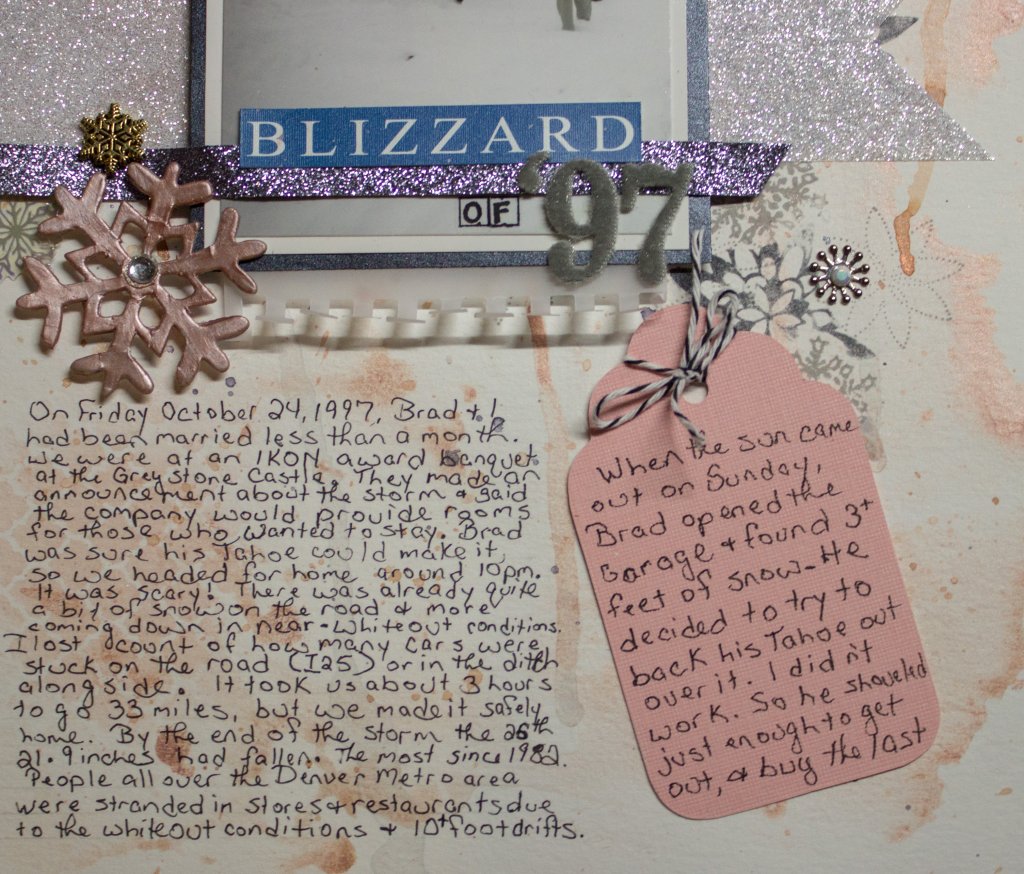 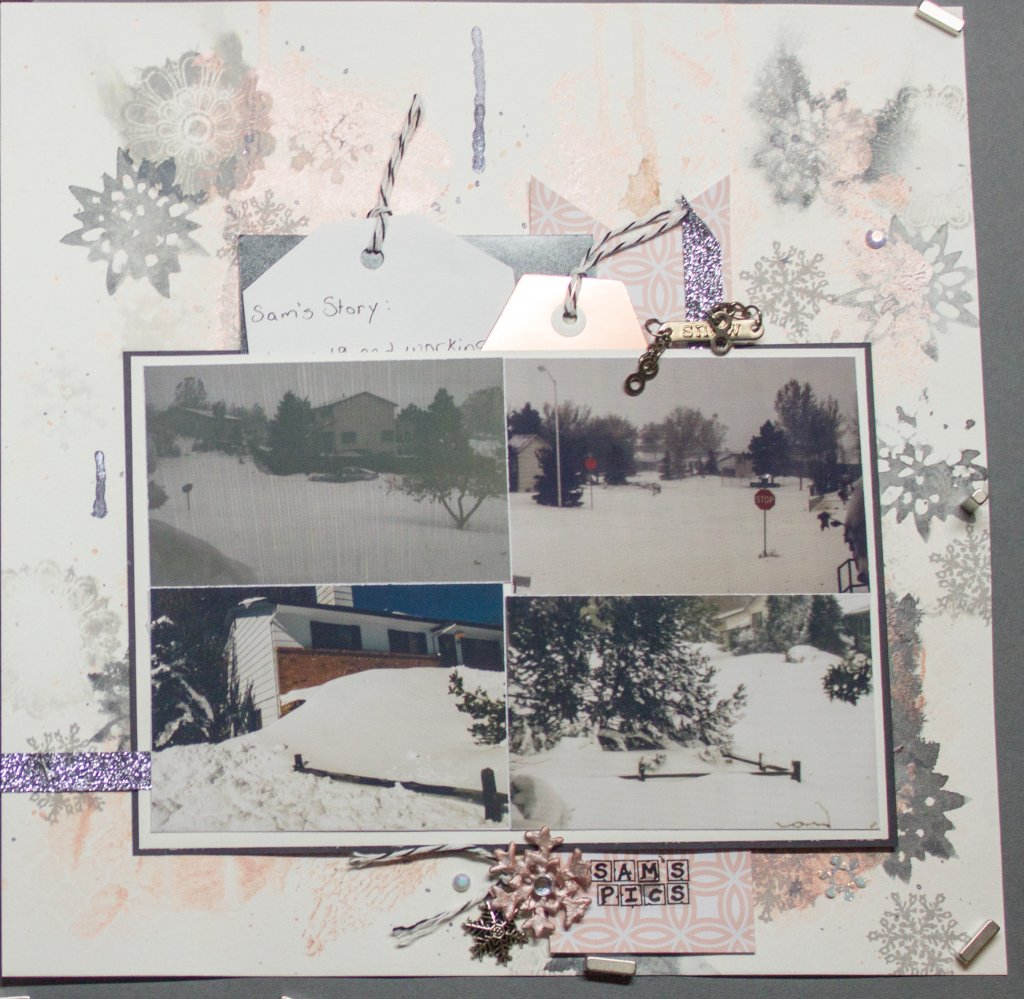 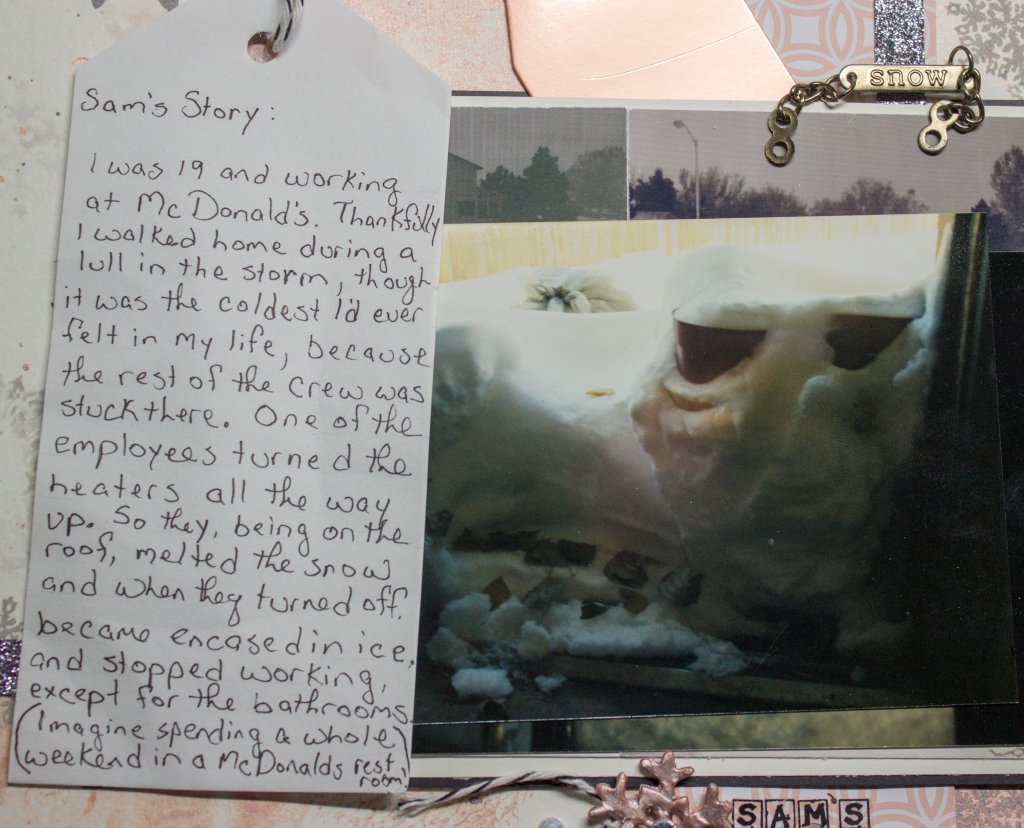