#7. Major faux pas, or totally great? Can you use the same photo twice in your scrapbooks?

Let’s get to the bottom of this divisive question!

Are you a photo-driven or story-driven scrapbooker?

Do YOU use a photo more than once?

PROMPT: Create a layout that is a ‘best of collection’. A ‘Top 5 Photos of August’ layout is the perfect way to use a photo more than once in your scrapbooks.

TIP: Try it! Use a photo more than once, especially if it’s a photo you love! 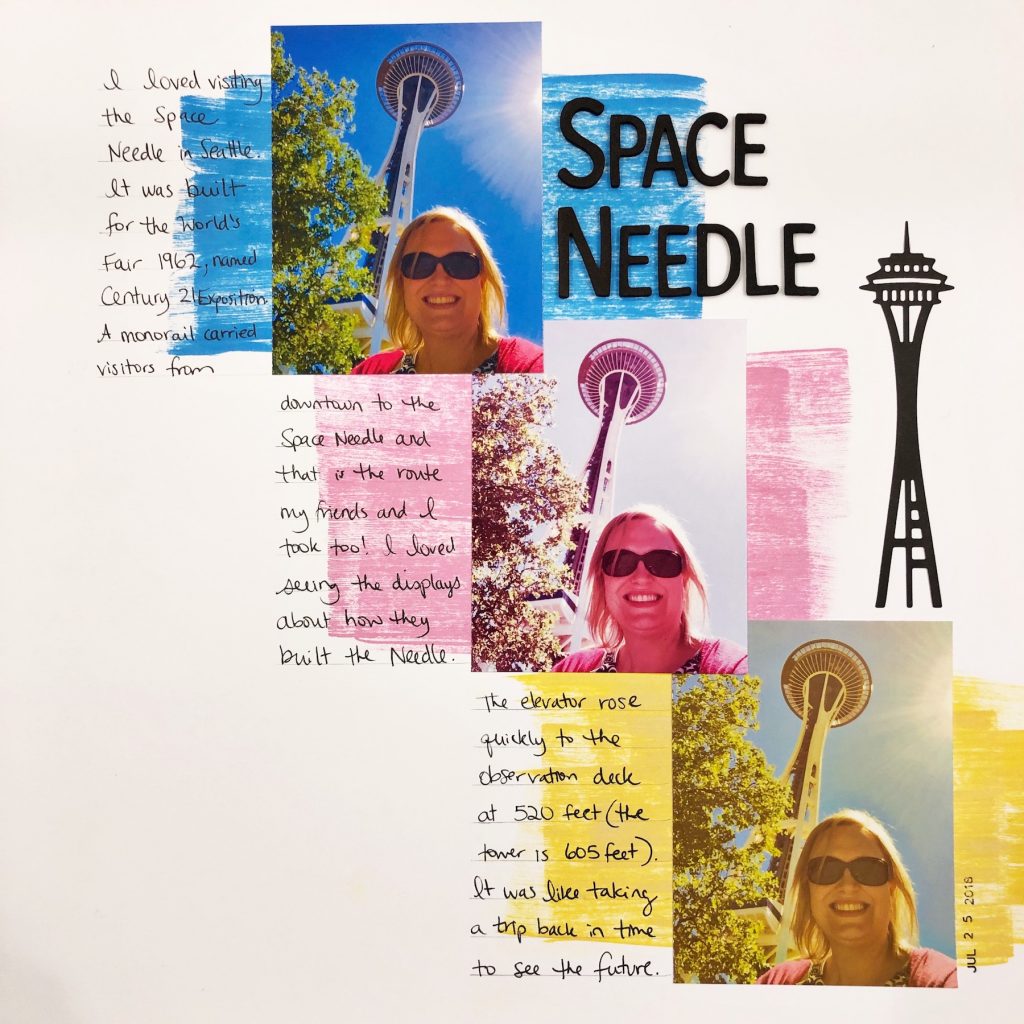 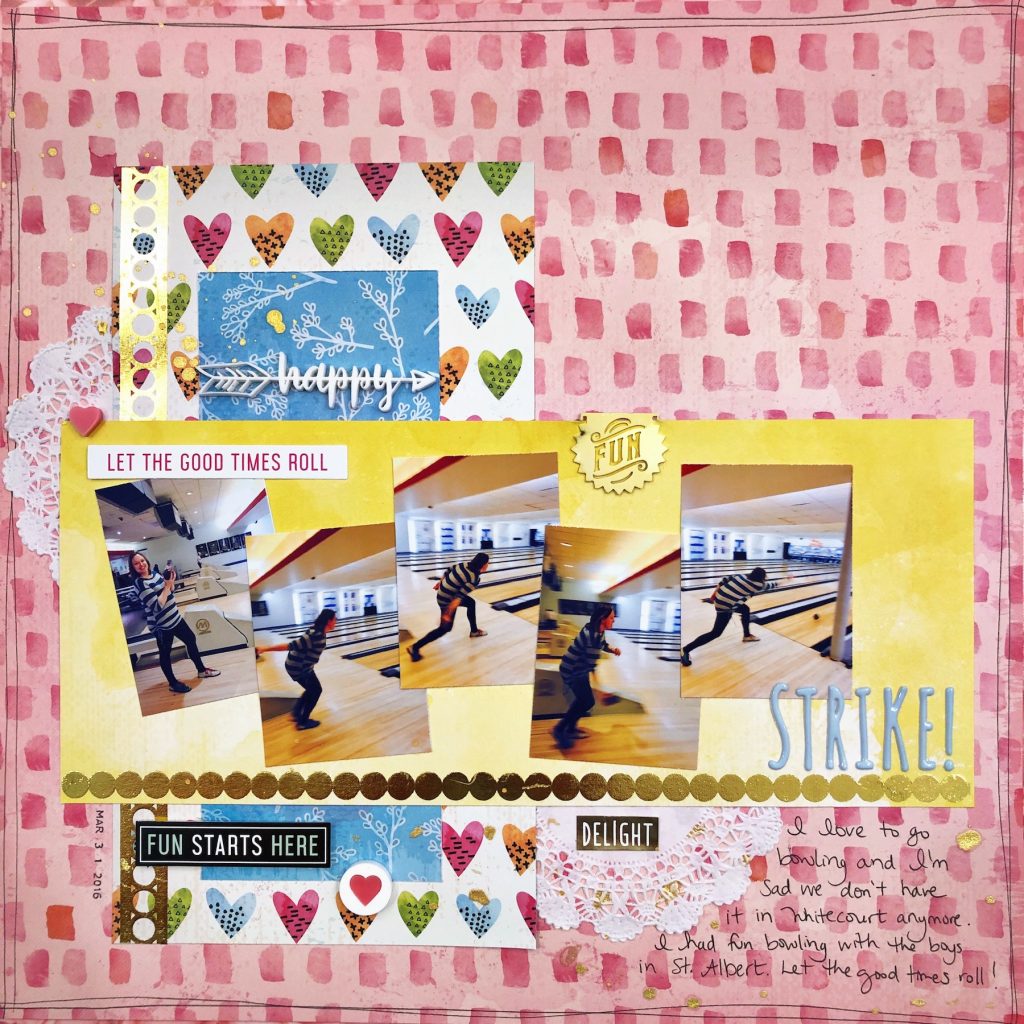 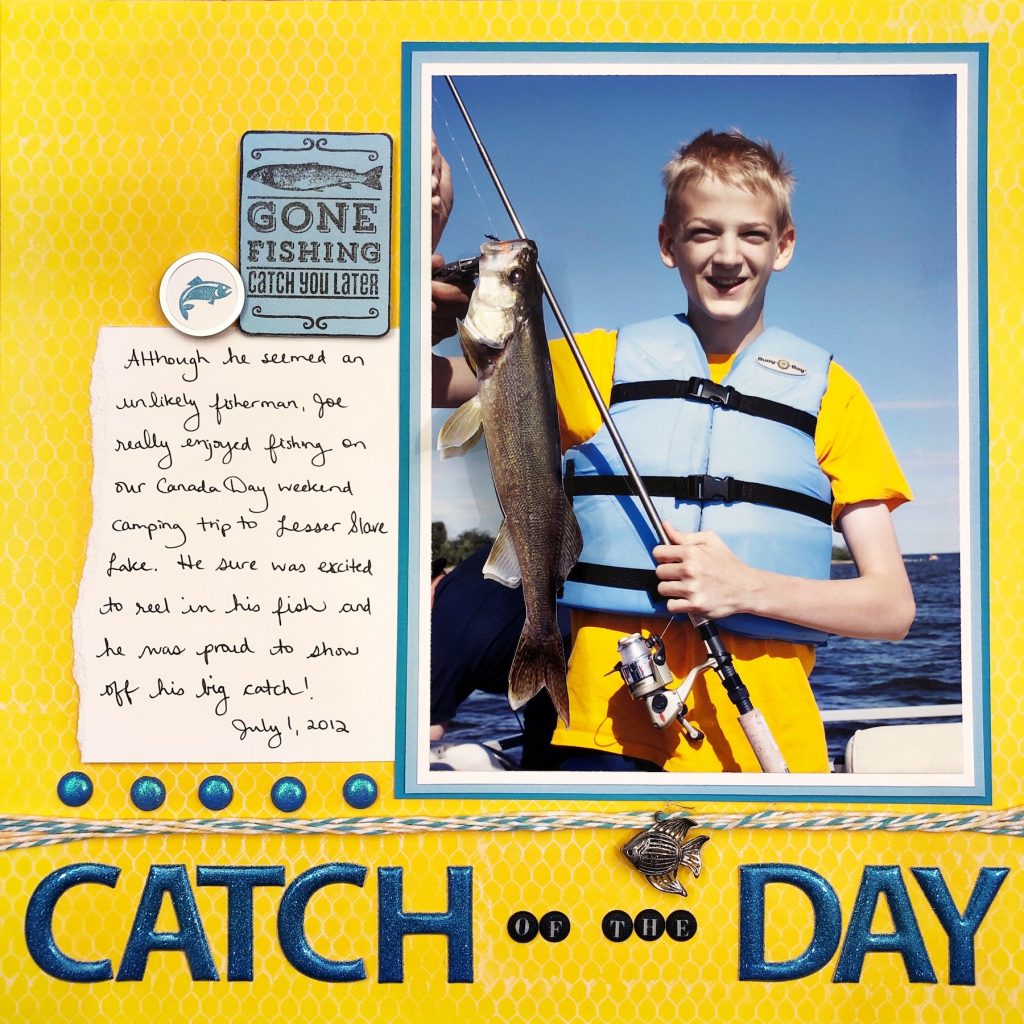 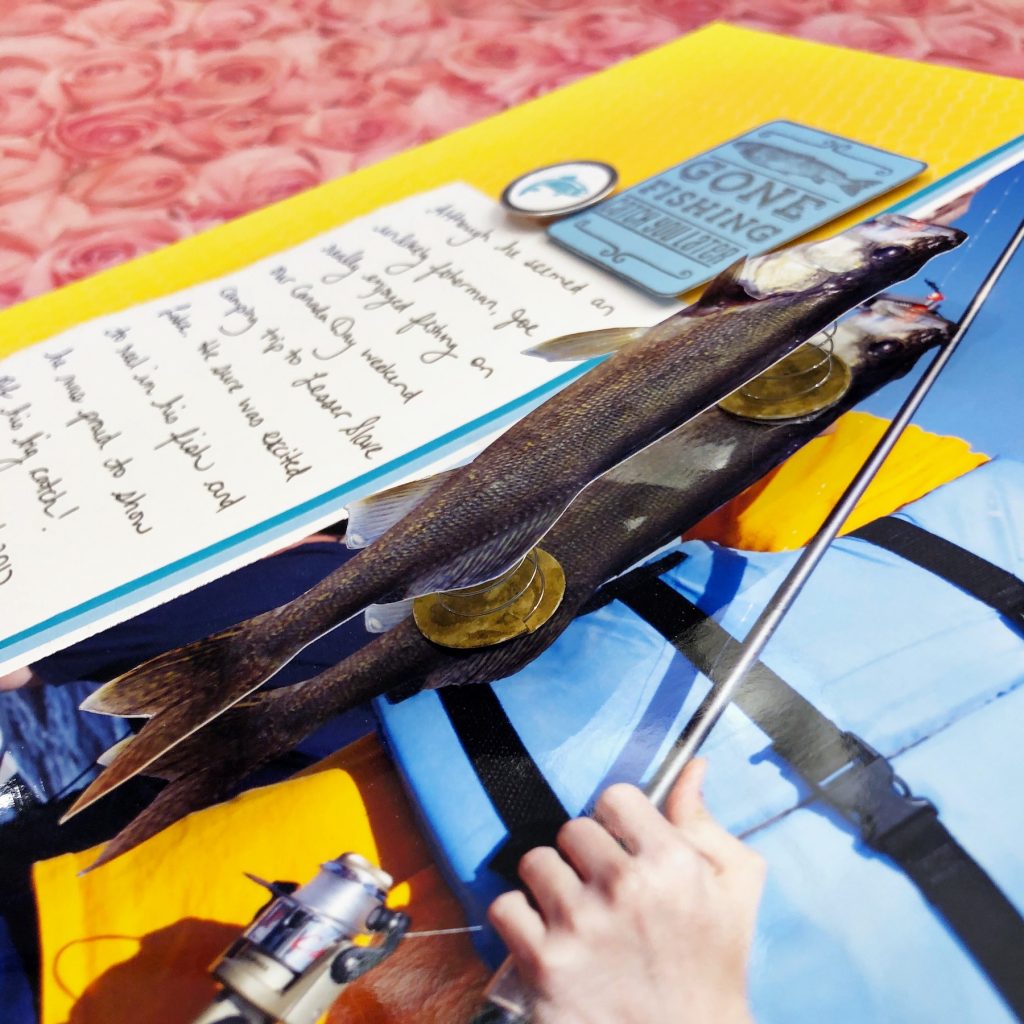 Sign up for emails HERE so you’ll get the link for the next Scrapbook Live FREE online crop!

Leave a message with SpeakPipe

You can send me a voicemail to let me know what you think. If I play your message on a future episode I’ll send you some Happy Mail! Thank you!!!! 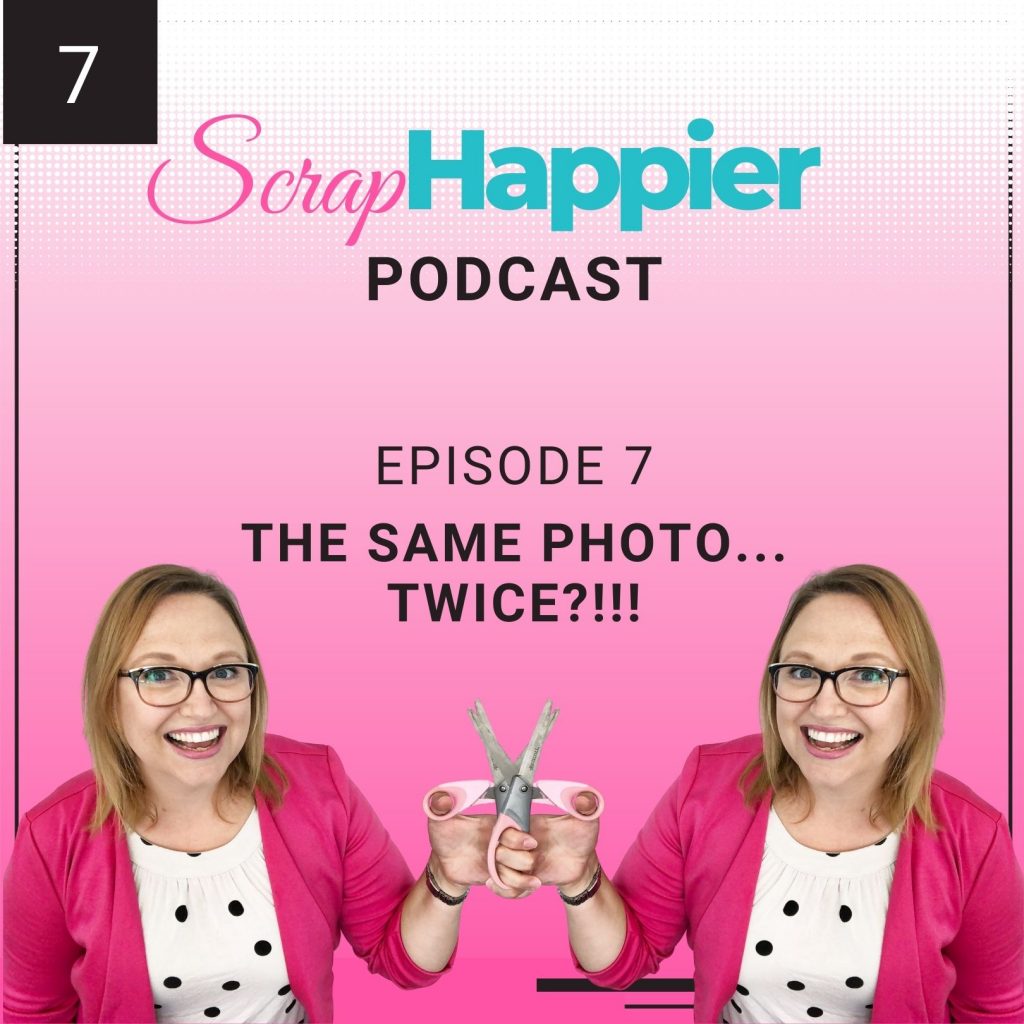 I’m so glad that you joined us for episode seven. Today, we’re going to talk about something that is a slightly divisive topic for scrapbookers. Can you use a photo more than once in your scrapbooks? And I’d like to know whether you’re team yeah, you bet, or nope, no way, not happening. So let’s talk about it and see if we can have a slightly different perspective on whether it’s a good thing or a bad thing to use a photo more than once in our books. To start with, let’s hear out the side of the nos.

The goal for many scrapbookers is to scrapbook your photos, so more photos scrapped equals more success. And along that vein, you might be thinking, why would you use a photo that you’ve already used? That is highly inefficient. These scrapbookers are photo driven. They’re often scrapbooking events and the different activities that are happening in their life. So if your goal is to scrapbook all the photos, using a photo more than once doesn’t make a lot of sense.

But here’s the other side. The yes side. These scrapbookers tend to look at photos as an embellishment to a story and if that photo is there to help you tell that story, you can create opportunities to use a photo more than once. I think the easiest way to understand this is to talk about heritage photos.

Older family photos are often in a limited supply. I literally have about one dozen photos of my dad as a child, but I can tell you that I’ve definitely heard more than a dozen stories about my dad as a child, so if I want to create a page about these stories, I’m going to go to that pile of 12 photos and pick one of them out to help embellish that page.

I recently just heard a story about my dad riding on a bike with his friend, Stan. They crashed into a Range Rover and they knocked out seven of Stan’s front teeth. He nearly died. He was bleeding everywhere. And my dad would not confess to his parents what had happened, but he was as white as a sheet. So they knew something was wrong.

But heritage stories aren’t the only ones that end up with few or no accompanying photos. Sometimes your camera dies. Sometimes you ran out of film. Sometimes you’ve run out of batteries or storage space on your phone. Maybe you missed the moment or the action. Maybe you lost that camera or that phone. Sometimes no one thought or remembered to take a picture. And sometimes you’re not even allowed to take pictures. That’s the worst, isn’t it?

Those are all situations where you might use a photo that you’ve already used before just to help you tell that story, to represent that image. Another reason that you might want to use one image multiple times, and I think this is really applicable now, when we have a lot of photos, why would you need to use a photo again? Sometimes you’re doing something artistic. Have you ever printed out a photo more than once and then cut out different sections of that photo so that you could raise different elements up to create dimension on that photo? It looks so cool.

I use this technique on a fishing page. I printed out a picture of my son, Joe, holding his catch. It was a pretty big fish and he was pretty excited and he really wasn’t that into fishing before this, so it was a special moment. So I printed the picture twice. From the second picture, I only cut out the fish. Then I took that fish and I popped it up on little springs from the first picture, so it kind of wobbles around and moves around as you look at the page. It is awesome, it is hilarious, and it was the coolest way to use two copies of the same picture.

Or maybe you’re going to use the same photo in black and white and in color on the same layout. Recently during the ScrapSmarter Experience, [Tashiana 00:05:12] Gordon showed us a sample layout where she had used a black and white and color photo, the very same photo, on one page. And people’s mind were blown. They’re like, I have never thought to do that.

Two years ago, I had the chance to travel to Seattle and I went to the Space Needle with some friends. It was amazing. It was so fun and such a cool place, and I was so inspired. So I took one of my photos of me taking a selfie in front of the Space Needle, and I did some cool effects on the photo. I used a pink filter on one of them. I used a yellow filter on one of them. And then I really boosted the colors on the third picture. With a little swash of ink pads behind those pictures, oh my goodness, that layout just pops. I’ll share it in the show notes, so you can check the show notes or you can head right over to scraphappy.org/episodeseven.

Finally, there’s one more reason that you might want to use a photo more than once. Maybe you really love it. If you got that rainbow unicorn photo, that magical moment where you have a picture of yourself that you really like, or your kids are actually smiling in the same frame at the same time, then why would you not want to use it? There are so many pages where we don’t have that moment of action and we just need that picture to fill in a spot. So this is your perfect chance to use that photo. Maybe once, maybe twice, maybe three times, maybe more. And don’t let anybody judge you for that, especially yourself.

Really, let’s think about it for a second. When we take multiple photos at an event and we’re putting multiple photos that are basically the same pose on a layout, is that really using different photos? Sure, technically they’re different because they were taken two or three seconds apart or whatever, but if they’re showing the same thing, they’re really not that different, and somehow we give ourselves permission to do that, and we can do really fun things with it too.

I made a page about going bowling and I created a progression of me winding up and tossing the ball, but really, I don’t need five pictures of me throwing a ball to understand what bowling is like, so is there actually more value in that? I’m really not so sure, but I’d love to hear your opinion. You can send me a voice recording through SpeakPipe on the show notes page, and if your message is featured on a future episode of the ScrapHappier podcast, you’ll receive some happy mail from me.

For your prompt today, create a best of page. This is a great way to reuse a photo that you’ve used before. Create a page that features the top five photos from August, or any other month. I really love to use this idea in January and create a page that has the top 10 photos from the previous year. It’s such a good way to look back at the highlights from the year before.

The tip of the day. Photos can be used more than once. It’s okay if you’re an event scrapper and you’re trying to use up a lot of photos, there are definitely going to be places where you want to use a photo again. And that’s all right, this is your scrapbook. You’re the boss. And especially if you found that unicorn photo that you really like of yourself, feel free to use that thing all over the place.

I can’t wait to hear what you think about using photos more than once, so please do leave me a SpeakPipe message, it’s really quick and really easy, and you have the opportunity to rerecord so you don’t have to worry about it being sent off before you have final approval.

If you’d like to see the layouts that I discussed today, the bowling page, the Space Needle page, and the catch of the day page, I’ll have those on the show notes page at scraphappy.org/episodeseven. And if you’d like to scrapbook with me, I do a monthly session called Scrapbook Live, and I’d love to have you join me. It’s totally free, you just have to sign up for emails and that link will also be on the episode show notes.

Thank you so much for joining me for episode seven in the ScrapHappier podcast. If you’re so inclined, you could leave me a five star rating or a review, which really helps other people find this podcast. If you make a layout inspired by today’s prompt to create a best of page, or maybe a top five photos August, I’d love to see it, so be sure to tag me on Instagram, #ScrapHappierPodcast.

I hope that you take today’s tip to use a photo more than once as a bit of a challenge, and I hope that it inspires you to do something fun and creative with your scrapbooks, or maybe tell a story that you’ve been waiting and wondering how you’re going to do it because you didn’t have that perfect photo. And hopefully it will help you ScrapHappier.