Episode 8: The Vortex, Quagmire, Snowballing Pit of Despair… AKA Perfectionism

#8. Do you struggle to create some layouts because they are too important, too special, too valuable, or too precious? In Episode 8 we’ll examine the vortex, quagmire, snowballing pit of despair that is caused by perfectionism.

We’ll get real about WHY it’s so important NOT to put off scrapbooking our really important photos, layouts, projects and albums.

We’ll talk about the imperfection and unreliability of memory… with a crazy real life example… or two!

PROMPT: Make a layout about a special moment or event that you’ve been avoiding, or saving, to make it “just right”.

TIP: Take time to plan the page. You want this to be successful, so consider your design and write your journaling on scratch paper first. 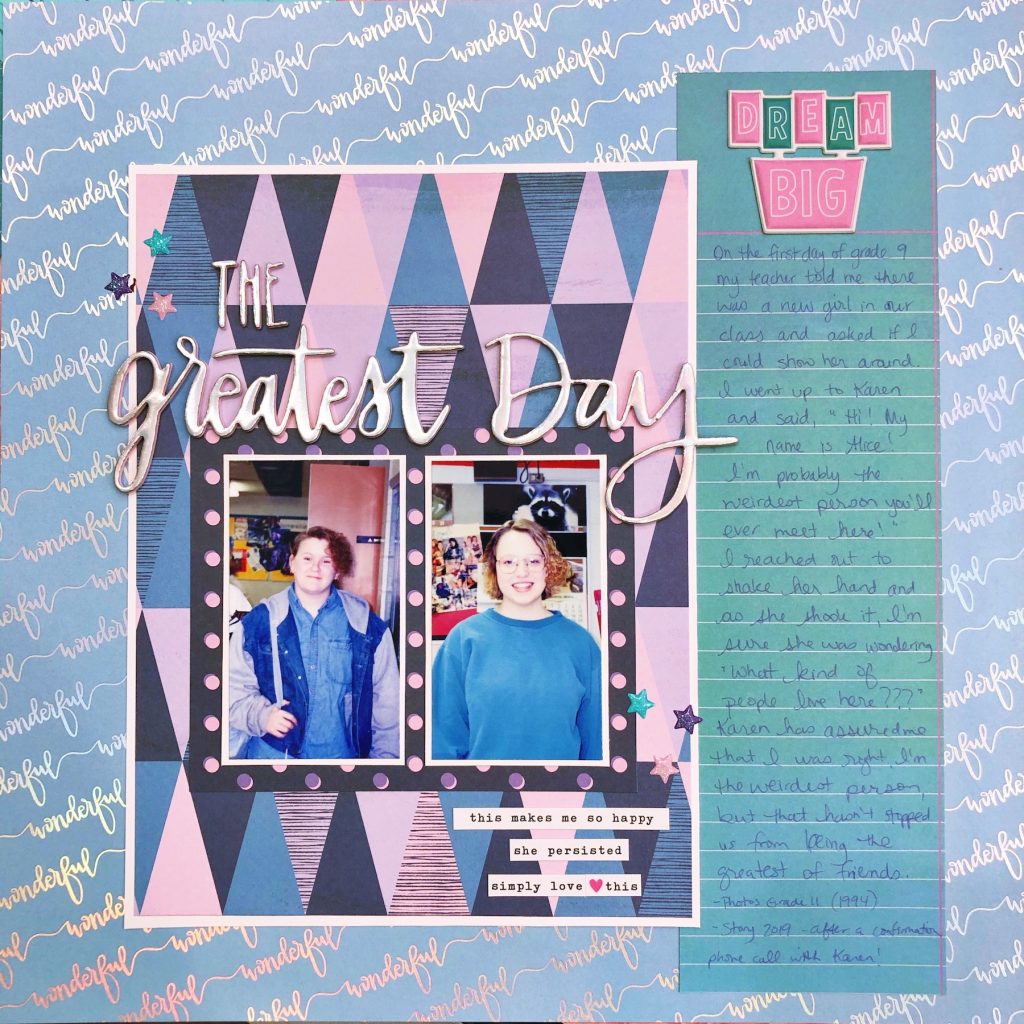 Leave me a SpeakPipe Voice Message! 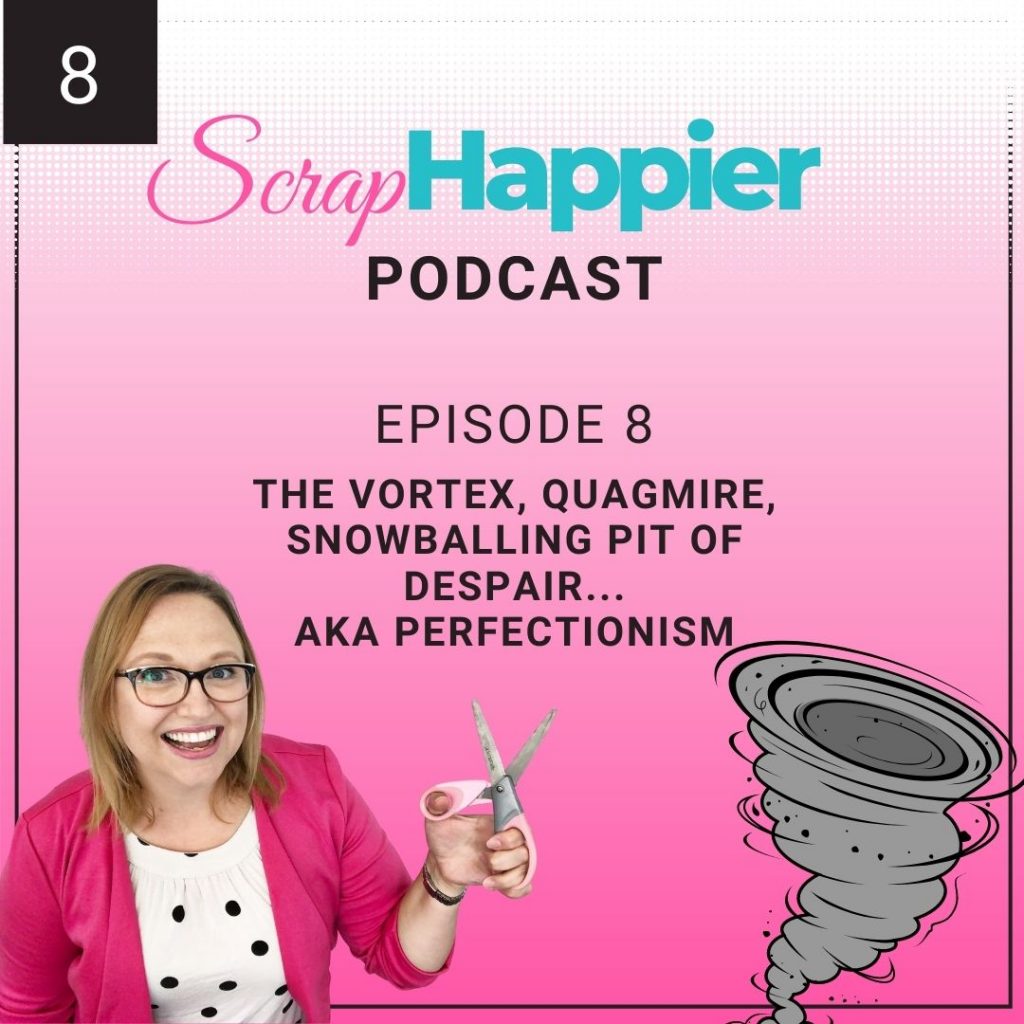 Welcome to the ScrapHappier podcast, where we share quick tips, tricks, and techniques to help you create scrapbooks you love and be happier while doing it. I’m your host, Alice Boll.

Thank you for joining me for episode eight. I’m so excited that you’re here and if you haven’t subscribed yet, go ahead and hit that Subscribe button. I really appreciate it. Plus, you’ll be notified the next time we have a new episode, like next week on a Tuesday. Okay, I have a tricky question for you. Well, actually it’s not even that tricky, but it might be a hard one to admit, do you have a layout, a project, or possibly even a whole album that you haven’t done because you have to get it right? Trust me when I say I get it. Sometimes our photos or our story or that moment or that event is so important and it’s so valuable it’s too precious that we have to do it right. We have to do it justice.

And as we tell ourselves we’re going to do the best job that we possibly can, but I can’t really do that right now, we find ourselves stuck in this vortex where we want to do it, but we just can’t get it started. Maybe it’s your baby’s photos. Maybe it’s your baby photos. Maybe it’s the stories from your childhood. Maybe it’s your wedding photos. I know a lot of people, my hand is in the air, that have not made their own wedding album. I have made all kinds of other scrapbook pages, but I haven’t made my wedding album. What is with that? And the longer we leave it, the more it becomes intimidating. We build it up more and more in our mind and we have to do just the very best job, and so we don’t even start it. It becomes a case of all or nothing, and generally it’s the nothing that wins out. We get stuck in this quagmire of perfectionism. Yeah, I said it, the P word, perfectionism. And don’t worry, one day we are really going to dive into this topic.

But for now, let’s just think about this. As the time goes by, we just feel more and more intimidated and we get frustrated with ourselves for not having taken action on this project. It’s like, how can I even call myself a scrapbooker if I haven’t scrapbooked my wedding, or I haven’t scrapbooked the birth of my child, or I haven’t scrap booked, fill in the blank, because there’s something there’s one project or maybe a couple of them that are holding you back and you’re just not getting them done? And here’s the worst part, the reason that we want to do this project is because it is so important. It is so special. It is so valuable. It is so precious. And that’s the most frustrating part of all, here is this thing that is so important and we’re just not doing it. It’s not getting done. We’re sitting in the pit of despair. Maybe we’re not desperate, I get it. It’s a scrapbook page.

But the more that thing sits there being not done. It weighs on her mind and it feels heavy on our shoulders, and the last thing you want when you sit down to enjoy your scrapbooking is to feel that guilt, because that’s what it is. It makes us feel guilty for not even doing it. And because we keep putting it off so that we can do it just right, so we can give it the justice that it deserves, what happens? What happens when you save it for later? Well, what happens is that we forget the details of the story. We forget the little things that happened on that day. We forget the quotes. We forget the things that people said. We forget that it’s harder to scrapbook this later. And then the more time that goes by it’s like this big snowball, it just becomes bigger and bigger and bigger.

And as the time goes by, it’s so much harder and you can’t go back and tell the journaling, unless you wrote it down, and then all the power to you, but if you didn’t write down the journaling in that moment, you can never recapture how you felt at that very time. You can try to relive it. You can try to recreate it, but it’s not quite the same. Everything is colored by the experiences that you’ve had since then, and I don’t know if this happens at your house, but it definitely happens at ours. As we retell these stories, our story changes. It’s subtle. It’s in small ways, but over time, that adds up. I heard my husband the other day telling a story about the time my brother drank a whole gallon of milk. He was laughing about how it had made him so sick. But the funny thing was, it was never a gallon of milk. It was a gallon or more of water and yeah, he totally was sick. But it was never milk. And that subtle difference, which my husband totally believed was totally wrong.

And this is what happens with our memories over time. As we relive these experiences, as we retell the stories, those stories can change a little bit and we don’t even realize it. And this isn’t even intentional, but it’s a thing that really happens. In 2015, NBC News anchor Brian Williams apologized for having mistakenly claimed that he had been in a helicopter that was shot down by ground fire in Iraq in 2003. And here’s the thing. He was in a helicopter in Iraq at that time, but he was in the next helicopter. He interviewed the guys this really had happened to, and over time, as he recounted his tale, the story slowly changed. And when one of the helicopter pilots actually called him out and said, “Dude, you weren’t on my helicopter,” he was shocked to realize that something like this could even happen to him. He apologized and said, “You’re absolutely right and I was wrong.”

It’s the craziest story ever. And you think, what? How could that even happen? How could you not remember that? And that’s a huge thing. Being shot down or not shot down in a helicopter is huge, and yet the little things that happen in our life all the time, if we’re not scrapbooking them, and if we’re not telling those really important things sooner rather than later, who knows how they’re going to change. And if you’re sitting on one of these stories, this story from your life that was so important that you’re actually avoiding to tell it because you just feel like you can’t do it justice, I have a perfect idea for you. This is the time to use the awesome supplies, the really good ones, that your project is never quite good enough to use so you use a different paper instead or you use different embellishments instead. It’s the perfect time to use those.

This story, this page, this photo is important enough to use your very best stuff on. And isn’t that exciting? I’m going to read to you the journaling from my page called, The Greatest Day. On the first day of grade nine, my teacher told me there was a new girl in our class and asked if I could show her around. I went up to Karen and said, “Hi, my name is Alice. I’m probably the weirdest person you’ll ever meet here.” I reached out to shake her hand and as she shook it, I’m sure she was wondering what kind of people live here? Karen has assured me that I was right, I am the weirdest person, but that hasn’t stopped us from being the greatest of friends. My photo for this page was actually from grade 11, way back in 1994, and the story was told in 2019 after a confirmation phone call with Karen to see if at least our two stories jived. So here’s your prompt of the day, make a layout about a special moment or event that you’ve been avoiding or saving to make it just right.

And for your tip of the day, take the time to plan this page. You want this to be successful. You’ve been putting it off long enough so consider your design and write your journaling out on scratch paper first. Let’s tell this story and really make a page that you love. Is there a story or a page or a photo that you’ve been putting off scrapbooking because you want to do it just right? I would love to hear about it. You can leave me an audio message on SpeakPipe at scraphappy.org/episode eight. You’ll also find today’s layout, The Greatest Day, and a link to the article about Brian Williams and his great big faux pas. And if I could ask a quick favor, would you leave me a rating? Reviews are the gold standard, but even clicking that little five stars is super helpful to help other people find this podcast. And I’d really appreciate it. I hope today’s prompt and tip of the day help you ScrapHappier and create pages that you love. Happy scrapping.