I’m standing there, ready to pull my hair out… I don’t know what to say on my page! Scrapbook journaling can be so frustrating!

I’ve been there… wanting to tell interesting and captivating stories about my life… but getting totally stuck!

I’ve figured out some great tips along the way and I’m here to be your scrappy bestie… I’ll share my best tips so you can write stories you love too.

Save the follicles! There is a better way, so let’s get started.

JOURNALING TIP: Start with the Action

In Raiders of the Lost Ark, the 1981 Steven Spielberg masterpiece, we are introduced to Indiana Jones in what is recognized as one of the greatest opening action scenes in history. Indy find the golden idol, replaces it with a perfectly weighted sandbag, and suddenly the whole temple starts to collapse! There are deadly arrows flying, walls are crumbling and then of course the iconic rolling boulder comes to finish him off!

We don’t yet know who Indiana Jones is, but we can see how quick-thinking he is. We learn that he’s agile and we are ready for a film that has grabbed us from the first moment.

Look at your photo. What IS the action? What’s happening?

By starting with a description of the action you immediately pull your reader into the story. Details and explanations can come later… captivate us by making us jump right into the scene!

This layout doesn’t actually have a photo of the action. That makes it more important than ever to draw your reader into the story. As you write it’s up to you to take the reader on the journey and make sure they want to read along to the end.

The phone rang and I overheard Jonas say, “Oilers tickets, no, I don’t want those.” Quickly I interrupted him and let him know that I had entered a contest at one of his work suppliers to win the hockey gam tickets. I’d never gone to an NHL game before and was very excited, as this game was the Edmonton Oilers vs the Calgary Flames. I’ve always found it funny that Jonas loved hockey as a kit, but really didn’t care to watch anyone else play it. We went, Edmonton won, and it was fun!

(Yes… I ended with, “It was fun… kind of lame… but good writing is a work in progress!) 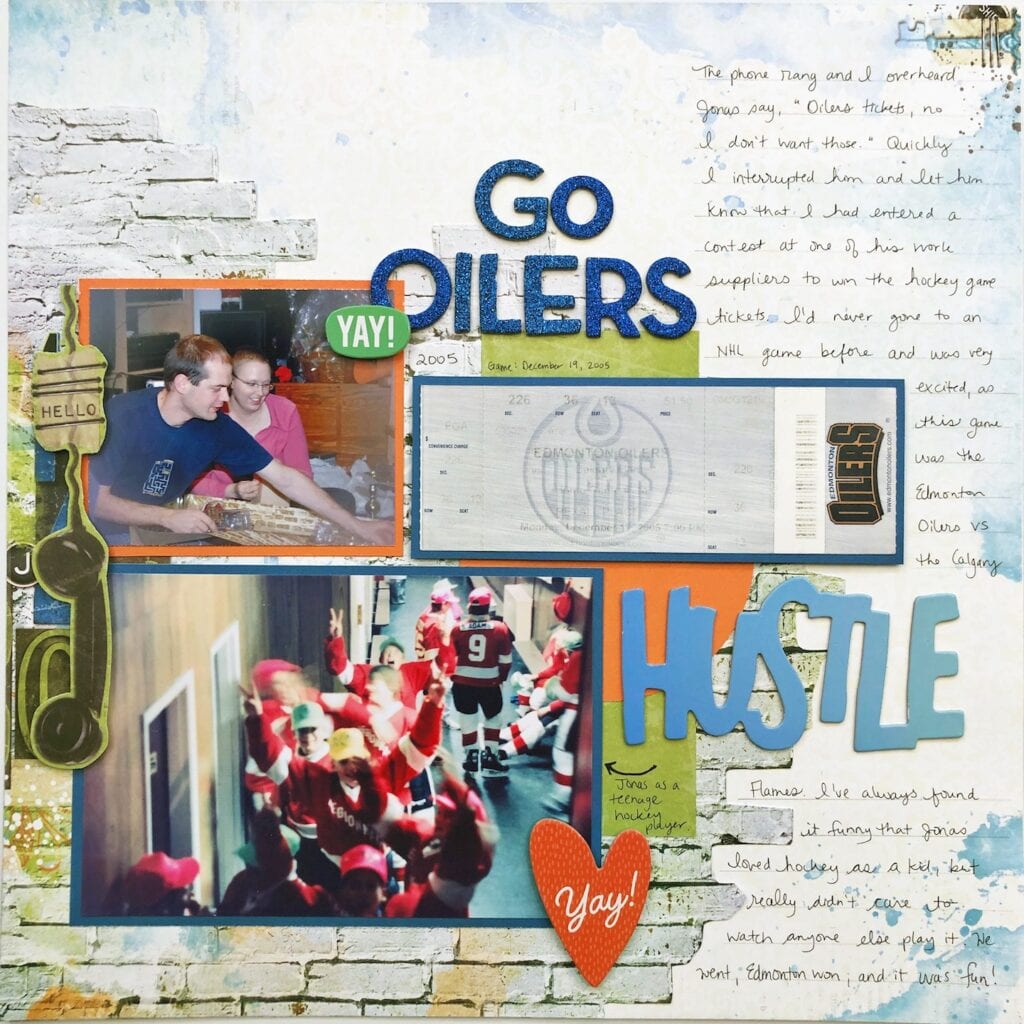 Did you see the previous Write On Journaling Tip? Show A Friend

I’ll be back next week with another journaling tip.

If you create a layout using this technique I’d LOVE to see it! Please tag me on Instagram @aliceboll

1 thought on “Write On Journaling: Start with the Action”