Do the things that fascinate you make it into your scrapbooks? It’s easy to overlook some topics as we scrapbook our stories that we take photos of, but what about the things that aren’t included in our photo documentation?

In Episode 32 we’ll examine our hidden stories and why we want to include these in our scrapbooks!

Consider what is hidden from your scrapbooks. What are your passions, obsessions and interests that don’t make it into your albums?

These layouts have helped Alice get her fascination for space into her scrapbooks. 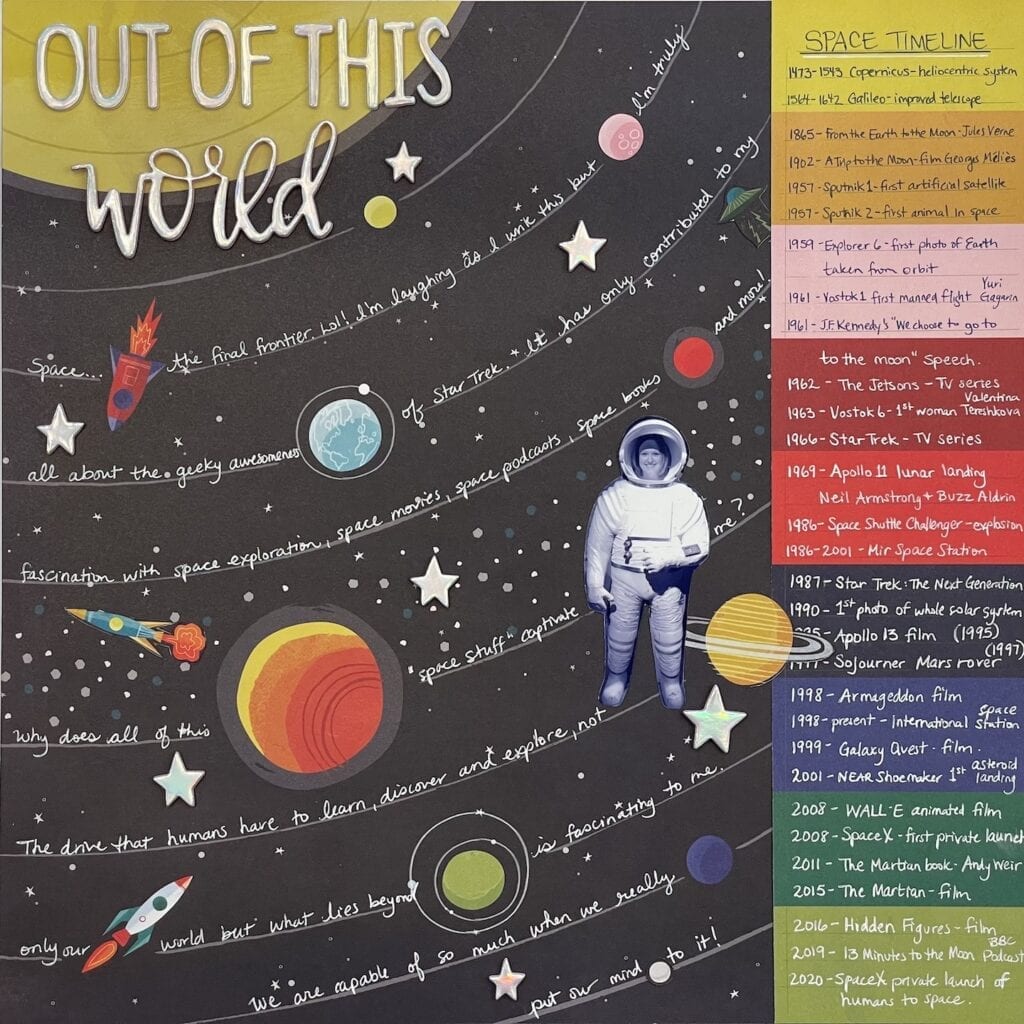 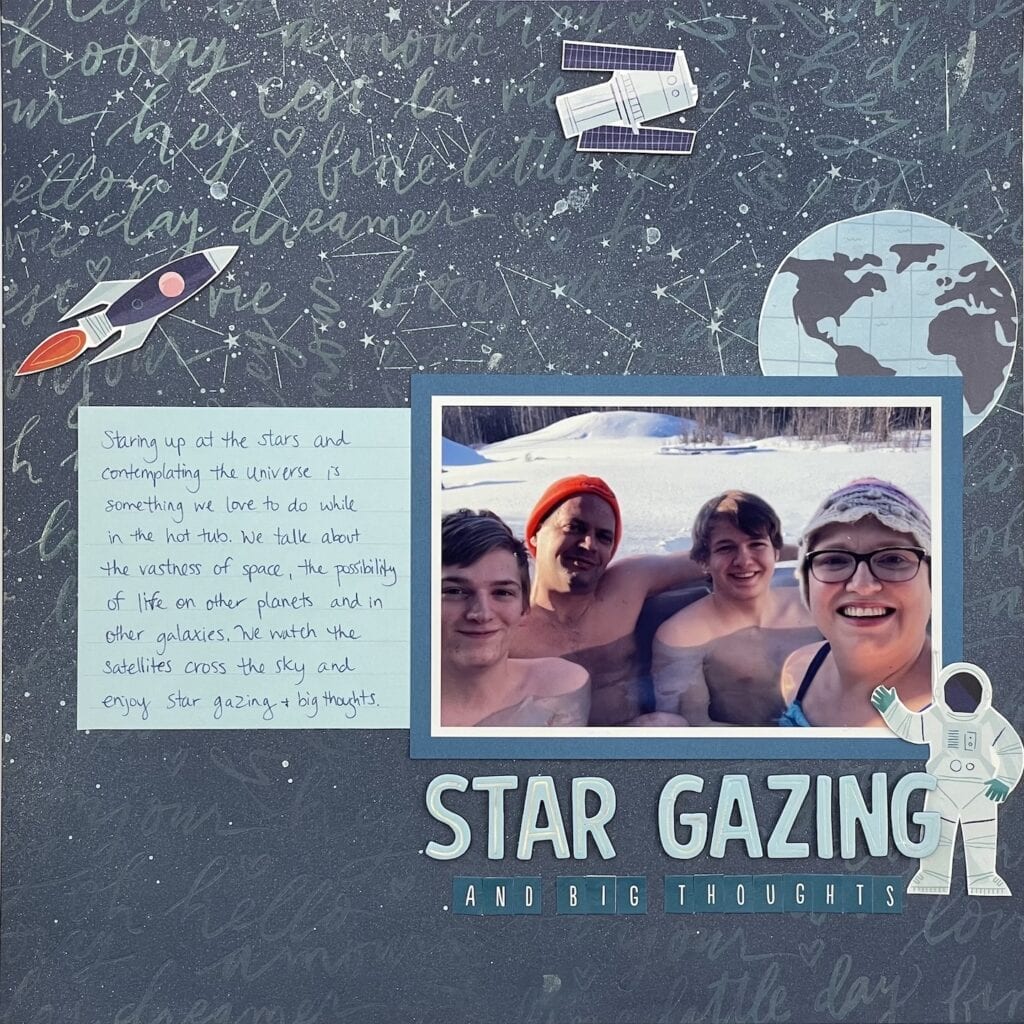 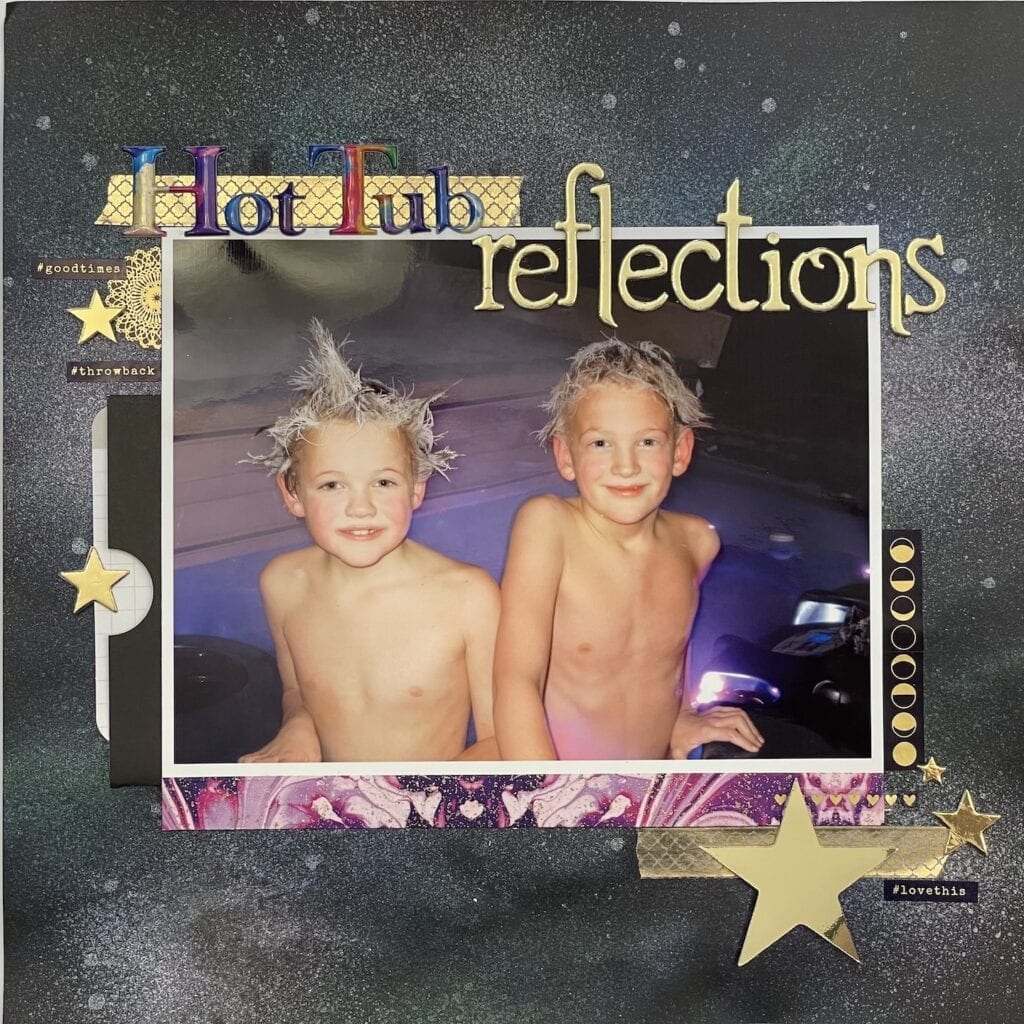 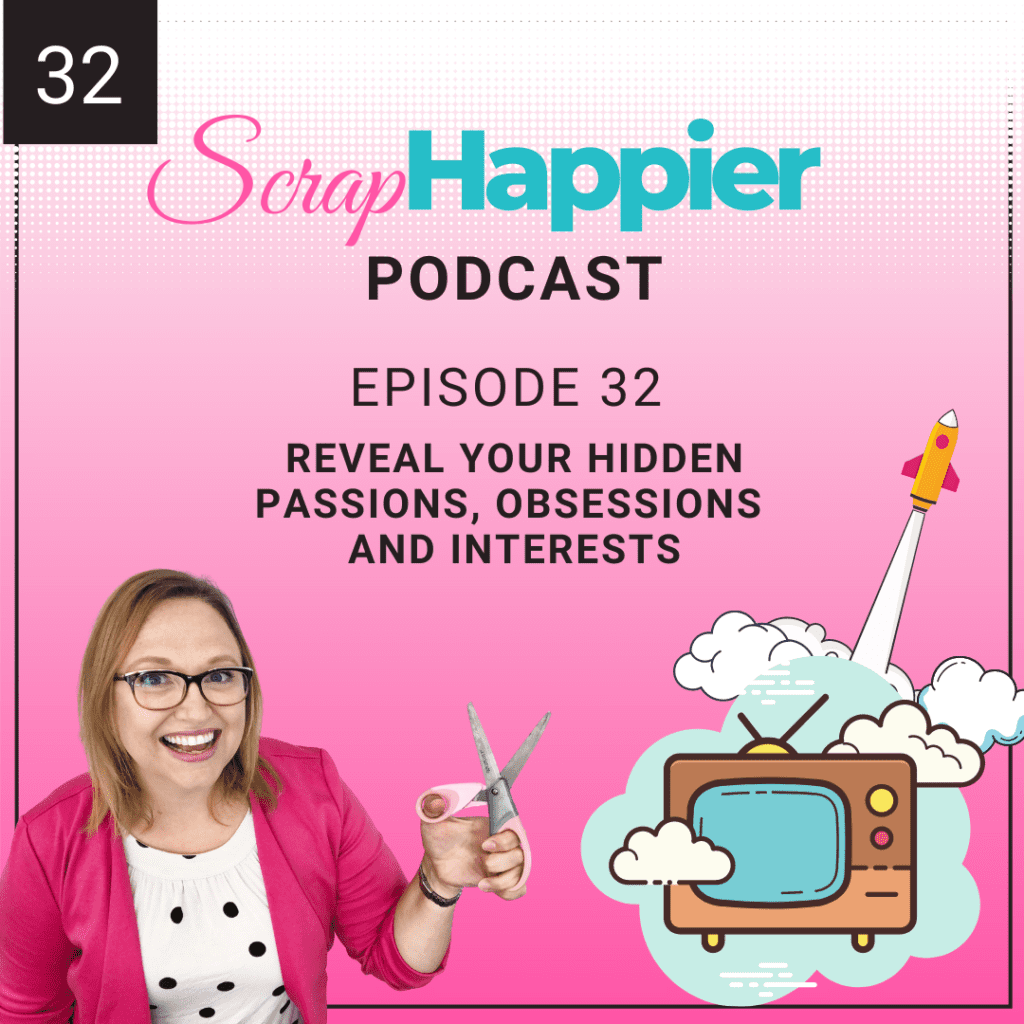 Welcome to the ScrapHappier Podcast, where we share quick tips, tricks, and techniques to help you create scrapbooks you love, and be happier while doing it. I’m your host, Alice Boll.

I’m so glad you’re joining us for this episode of the podcast. We are going to reveal your hidden passions, obsessions, and interests, and you might be thinking, Alice, I am not putting my deepest, darkest secrets onto my scrapbook pages. What are you thinking here? That’s totally okay. That’s actually not what we’re talking about. You’re allowed to keep those secrets to yourself. What we are talking about are those things that captivate and fascinate us, but somehow they never make it into our scrapbooks. And if you hang out with me until the end of this episode, I’ll be sharing a tip and a prompt that will help you explore your own hidden passions, obsessions, and interests, and how to get them into your scrapbooks.

I was recently watching the movie, or should I say rewatching the movie, Hidden Figures. According to Wikipedia, the film was released in 2016 and is based loosely around the non-fiction book, also called Hidden Figures by Margot Lee Shetterly. It’s about African-American female mathematicians that worked at NASA during the Space Race. I watched this movie because I’m fascinated by space. I’m fascinated by the stories of the people, the creativity needed to get the things done that have allowed us to explore the dream, to chase the dream and to miss paraphrase Star Trek, to boldly go where no one has gone before. So here I am intrigued and fascinated by the idea of space.

And until recently, this was completely lacking, completely hidden from my scrapbooks. As a child, I loved it when they brought the planetarium to our school and they’d blow it up inside the gymnasium. We’d all get to crawl inside the little tube. We’d watch the stars projected onto this inflatable dome. As they told us about the discoveries that humans have made about our solar system, our galaxy and space in general, I loved going to the space and science museum when you get hop on different scales and it would tell you how much you weighed on Jupiter or Mars.

And imagine my surprise and delight when flipping through an old photo album of my mom’s, I found a picture of the television showing a lunar landing. Obviously I wasn’t the first person in my family to be excited by the idea of space exploration. Now I’m not going to pretend that I spend a ton of time exploring space stuff. I’m not some secret space scientist here, but I do allow these opportunities for space things to enter my life quite freely. When The Martian book was released, I listened to the audio book, and then was delighted when the movie came out. I also found a podcast released from the BBC called 13 Minutes to the Moon, where they broke down the final 13 minutes before the Apollo 11 lunar landing.

If you haven’t heard that podcast and you’re at all interested in space stuff, it is delightful and has amazing audio with a score from Hans Zimmer, the guy behind The Lion King, Pirates of the Caribbean, Interstellar, The Dark Knight, and so many more. My fascination with space has led me to not only consume more movies, films, and books that have space themes in them. This hidden fascination for space stuff has actually helped me to consider other topics that I might not have spent as much time on had they not been introduced through the idea of space. When I watched The Martian, I was really thinking a lot about the whole isolation that the main character experiences when he’s alone on the planet of Mars. And you can just guess at how much that applied to the thinking that I had with the year 2020 and our isolation that we felt during that year.

Growing up and watching Star Trek, I always wondered if we would ever have the opportunity to communicate with people from other planets, or even visit other planets. These days, the discussions about whether or not we’re alone in the universe or whether there is life out there, whether it’s actually visited earth already, or whether that’s further down the line happens when we’re sitting in the hot tub, staring at the multitude of stars. I don’t think you can watch the Hidden Figures movie without thinking about gender and race equality. You might be thinking right now, Alice, I am not as obsessed about space as you are, and I don’t have hidden passions, obsessions or interests. It’s easy to identify our hobbies, but it can be a little bit harder to identify these hidden interests. They’re usually not the things that we’re taking pictures of throughout our daily life, but here’s a few examples to kind of get you thinking about it.

Maybe you just love word puzzles and crosswords and word searches, or maybe you have a lifelong love of learning. And it’s tough. So many of these things that we’re interested in and keep catching our attention aren’t necessarily things that we would scrapbook about ourselves, even when we do put an extraordinary amount of time into some of these other interests. One of the things you can do is think about where you spend a good quantity of your time. What kinds of movies or TV series are you drawn to? What do you watch on YouTube? Once you’ve identified a topic that you’re fascinated by but maybe didn’t even realize it, try to figure out what started this all.

One time when I was young, my mom woke me up and took me outside. We sat in sleeping bags underneath the night sky and watched the northern lights. They were so colorful and so active, dancing across the inky black sky speckled with the beautiful bright stars. It was one of the best northern light shows I’ve ever seen. I wonder, was this the start of it all? Was it my dad showing me the big dipper in the night sky or Orion’s Belt? I don’t know exactly what it was, but I know that there’s a good story in there. Those are the kind of things I’m trying to pull out for my scrapbooks now. So here’s my tip of the day. Identify which passions, obsessions and interests are missing from your storytelling. This fascination might be hidden from your scrapbooks, especially if it’s not something that you regularly take photos of.

And for your prompt of the day, reveal your hidden passion, obsession, or interest. It’s time to put that fascination into your scrapbooks to tell that part of who you are, to help me tell a little bit of my fascination with space. I created a layout recently called Out Of This World. Along the right-hand side of the page, I created a space timeline. I included important accomplishments like Sputnik 1, the first artificial satellite. JFK’s, we choose to go to the moon speech, The Jetsons, Valentina Tereshkova, the first woman in space in 1963, the Star Trek TV series, the 1969 Apollo 11 lunar landing, where Neil Armstrong and Buzz Aldrin were the first men on the moon, the 1986 space shuttle challenger explosion. This happened when I was eight years old. The 1999 film, Galaxy Quest, which I absolutely love, and is probably on my top 10 of all-time favorite movies.

And of course, some of the things I’ve already mentioned, like The Martian, Hidden Figures, 13 Minutes to the Moon and SpaceX, as now they’re going to be launching private citizens to space. I know I said I included important things and then I joked, and I said The Jetsons and Star Trek, but I really think that their impact on how I think about space and the galaxy and the universe and how humans fit into all of this makes them important enough to be on my space timeline. My journaling on this page reads, space, the final frontier, LOL. I’m laughing as I write this, but I’m all about the geeky awesomeness of Star Trek. It has only contributed to my fascination with space exploration, space movies, space podcasts, space books, and more. Why does all of this space stuff captivate me?

The drive that humans have to learn, discover and explore, not only our world, but what lies beyond is fascinating to me. We are capable of so much when we really put our mind to it. If you’d like to see this layout and a few other space layouts that I have made, you can find them for the show notes for this episode by going to scraphappy.org/episode32. I hope that today’s discussion about passion, obsessions and interests make you think about what’s included in your scrapbooks. Hopefully our tip and prompt of the day will get you not only exploring your interests, but including them into your scrapbooking too. If you do share them on Instagram, please use the hashtag scraphappierpodcast so that I’ll be sure to see it. I am so curious to find out what your hidden fascinations are.

All of this talk about space reminds me of episode number nine, it was called What’s all the White Stuff. it’s about white space design. So no, it’s not actually about outer space, but it’s about how we’re using the space on our layouts. So if that’s interesting to you go and check out episode number nine. I hope that our discussion today will help you realize there could be stories that are hidden from your scrapbooks and it’s time to get them on the page. So go ahead and reveal those hidden passions, obsessions, and interests, and hopefully it will help you scrap happier, and have fun while doing it. Happy scrapping.