Life Under the Sun

Reflections on a life seeking sunsets and waterfalls

Scrapbooking is my lifeline......

I lost my husband in February.  I can’t count the times I’ve had to say those words as a preface to some sort of business or financial transaction I was initiating. Nowhere in those words is the depth of loss expressed because that phrase doesn’t contain the words “best friend”, “travel buddy”, “sweetheart” or “awesome griller and washer of dishes”.  I can’t say that things aren’t still a bit raw but I’ve begun scrapping again and it’s amazing how much I enjoy remembering — not just events or trips or places, but the richness of the total experience of walking life’s roads with this man who was everything to me. 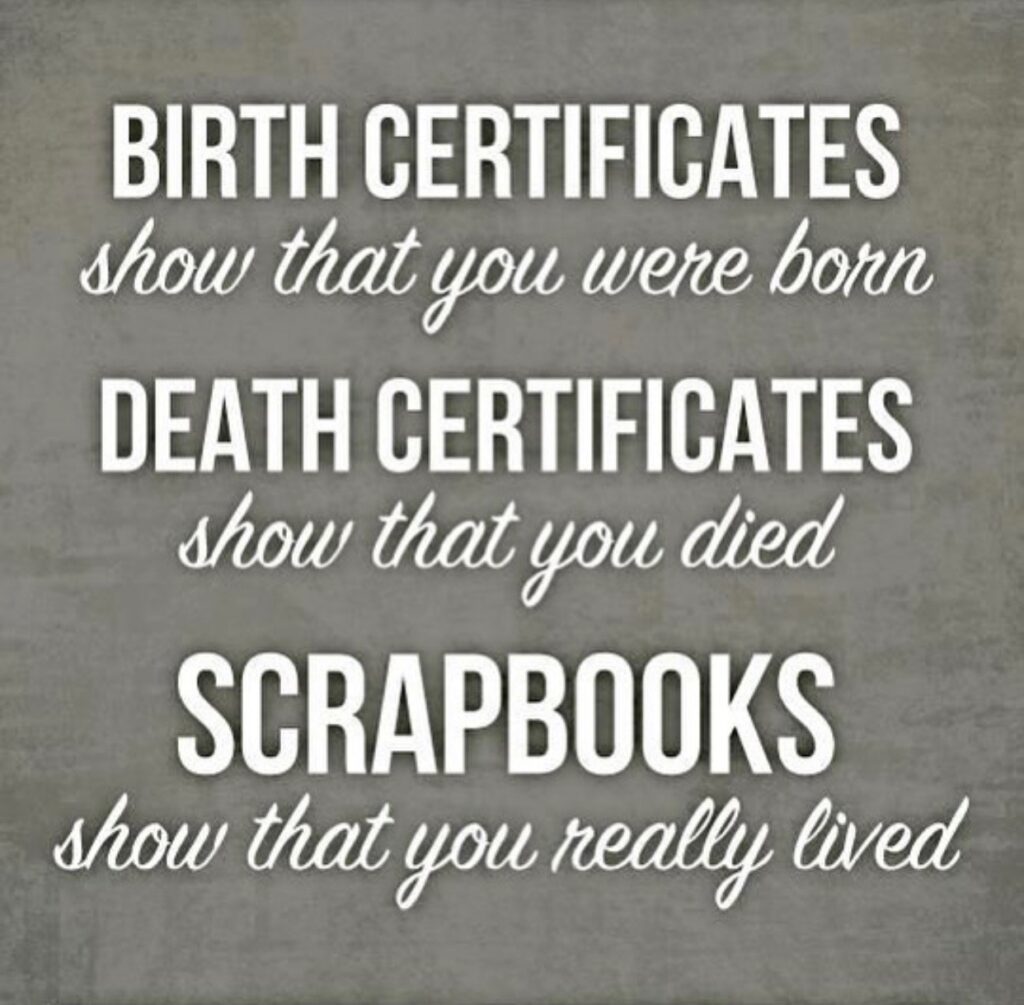 I came across this on Pinterest a while back as I was knee-deep in dealing with “stuff” that requires a death certificate for processing something that feels an awful lot like trying to erase someone from bank accounts and tax rolls and voter lists.  It was kind of an “aha” moment — Certificates come and certificates go but scrapbooks represent our golden opportunity to reflect events like birthdays and holiday celebrations in our lives, but even more importantly — to reflect the little, seemingly inconsequential moments and feelings and rushes of excitement or serenity that happen in the course of both our once-in-a-lifetime trips AND in our everyday lives.  And sometimes it’s the everyday memories that spark powerful emotions in us later. 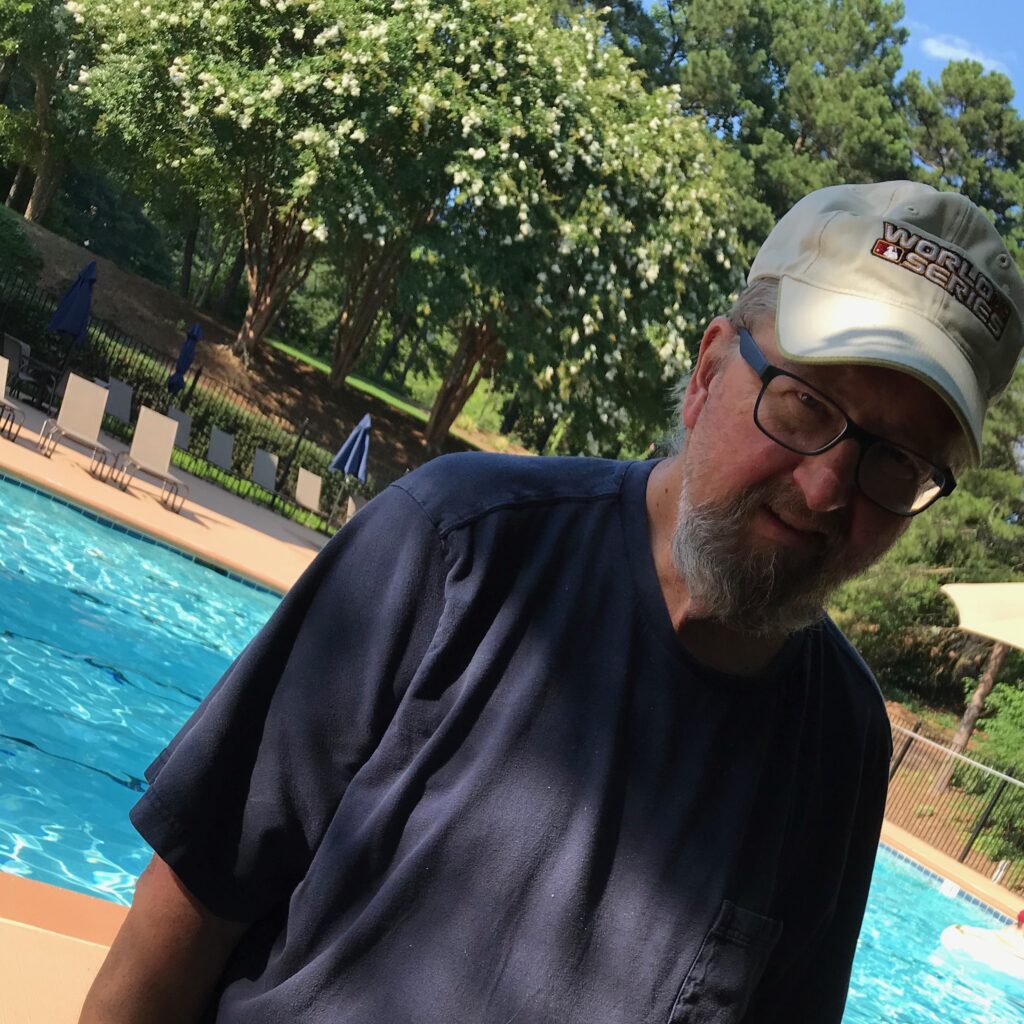 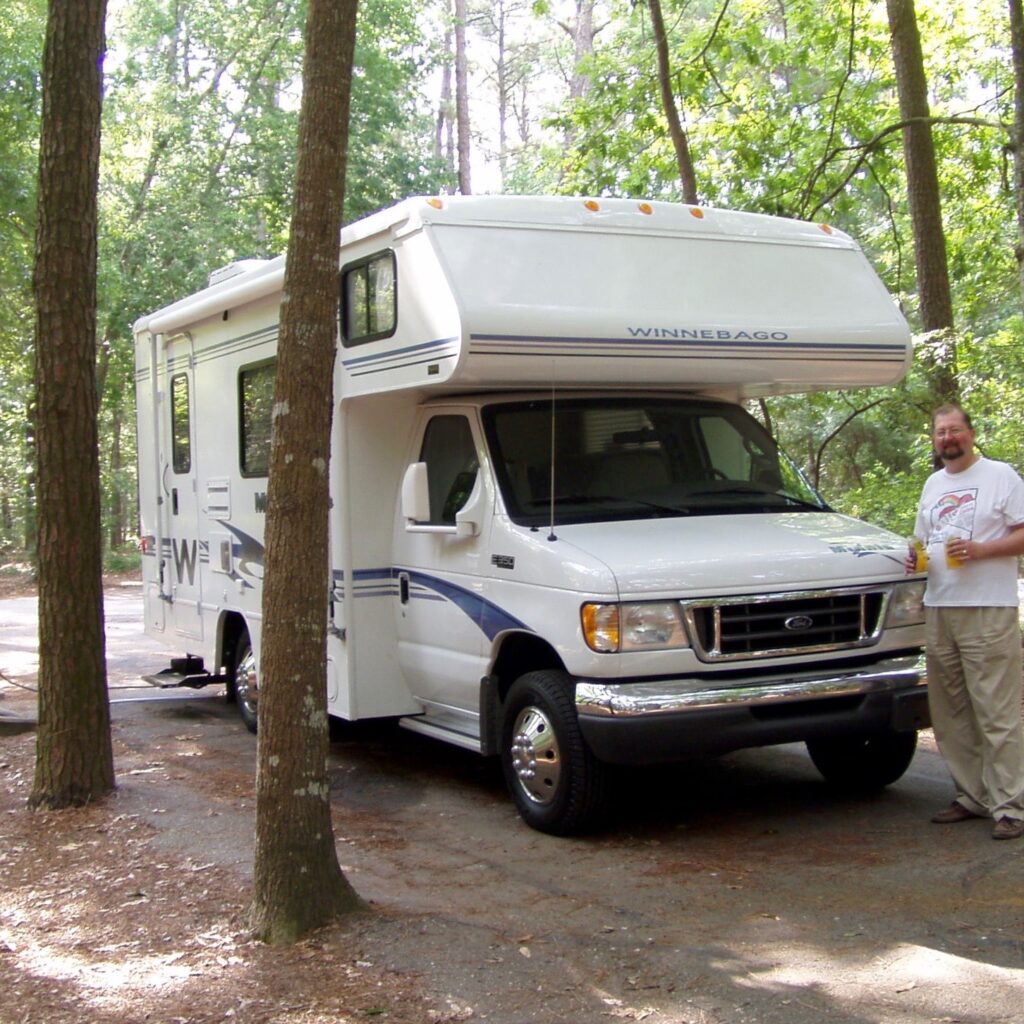 So many of our happy moments were spent in or near water and that’s certainly reflected in my scrapbook pages!  John is shown above at our neighborhood pool — the one we walked to every day during the season and that he was SO looking forward to continuing his re-conditioning in as he tried to recover his strength.  And sporting events — whether Ava’s tee ball or soccer games or Katie’s cheering at Barrett’s football or basketball games — were often sunnier and hotter than one might like, but there we were!  And at one point in our lives we hit the road in our RV, mostly to Texas state parks and occasionally trips to Louisiana or Kentucky to visit family or to Florida for that special brand of sunshine.  We were never mechanics but we learned a LOT on nearly every adventure!  We even lived in our RV for a few months because our house sold too fast!! 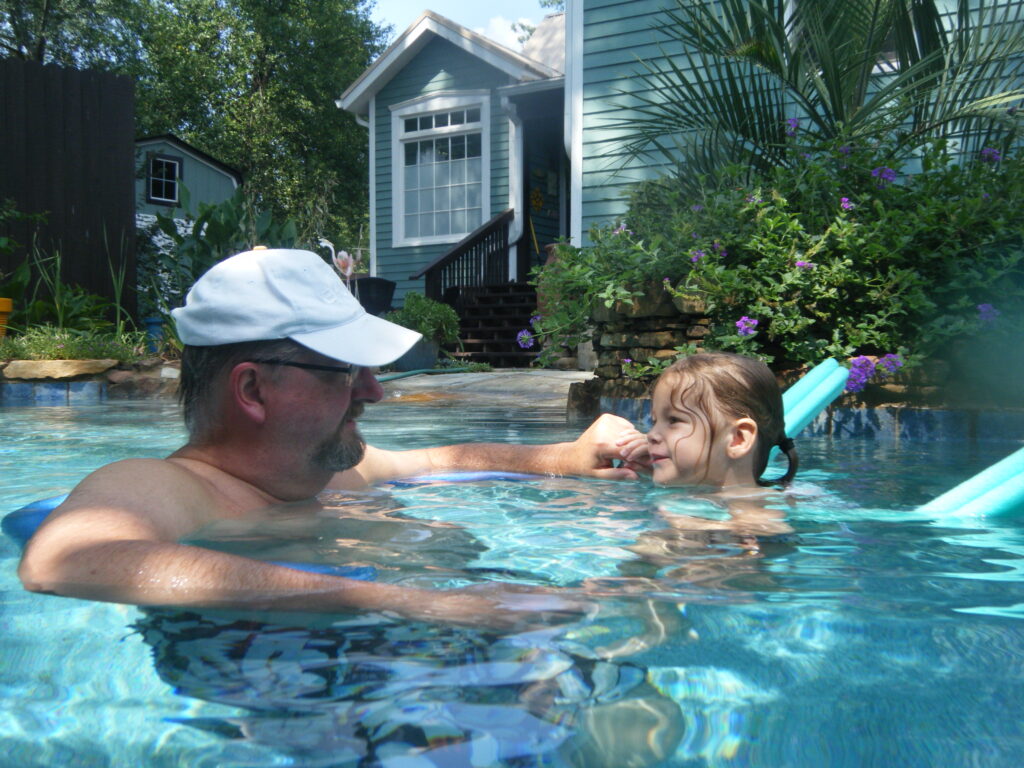 You Write the Caption!

As I went through my photos I came across this one that perfectly captures his gentleness and patience as he was coaxing Ava to swim around independently on her noodle.  The looks on their faces tells you everything you need to know about the bond between them — and I don’t think I’ve ever scrapped this photo.  Clearly I’ve missed an opportunity and I need to FIX that!  Stay tuned….. 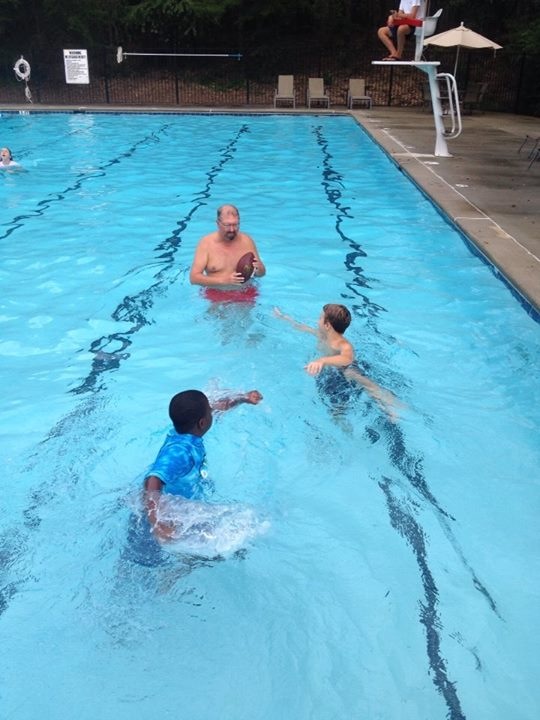 Barrett and his friends could always count on John to toss a football or tennis ball or whatever else they could find — he spent HOURS at this until they gave up — or the pizza arrived!

It wasn’t unusual to see a gaggle of younger kids clamoring to get a ride on his back or to get him to lift them up and toss them as each tried to make a bigger splash than the next.  I’m not sure this was his idea of a relaxing afternoon at the pool but it’s how things usually went!

As the kids got older there was less demand for shoulder rides or ball-tossing but that didn’t keep us from the pool.  We walked for hours against the resistance — great for his Parkinson’s therapy! 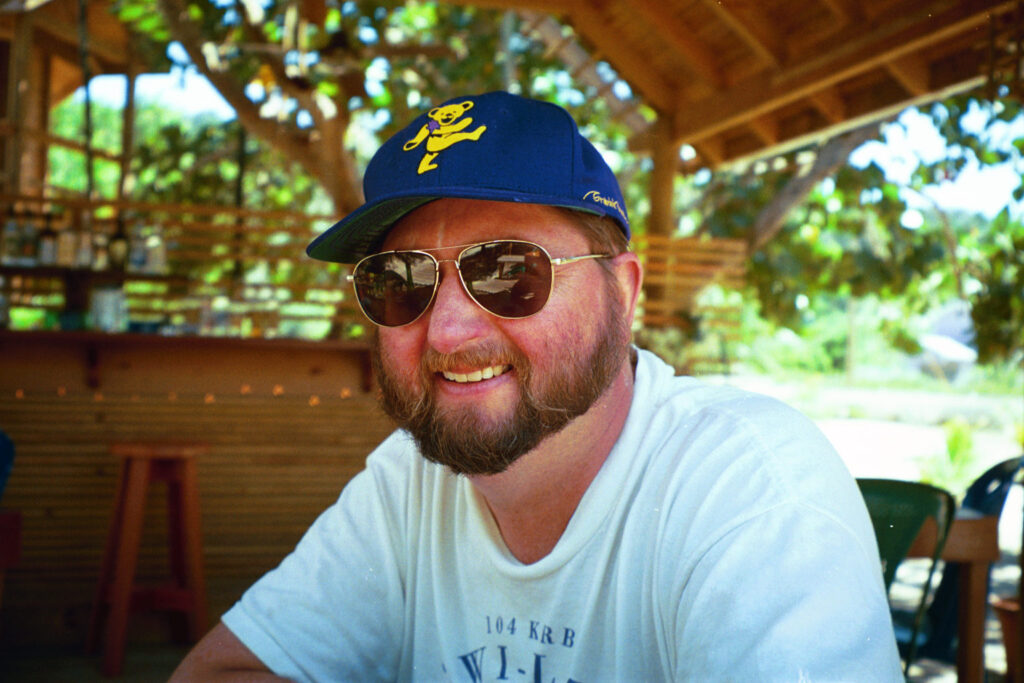 The photo above was taken on our second trip to Roatan and I love it because he’s wearing his Grateful Dead hat, his aviator sunglasses and a 104 KRBE tee from a 5K we’d run the year before.  He’s smiling that magic smile, waiting for lunch and an icy beverage on the beach.  Through the years we swam in the Aegean off the coast of Mykonos and went tubing on the Guadalupe near Gruene and hiked Copper Canyon and watched an eclipse poolside with Ava.  We camped amid old-forest pines tracked to Texas from Georgia by dinosaurs and we toured Raymond Burr’s orchid gardens in Fiji where we were surprised by amazing waterfalls coming out of nowhere. We swam in the ship’s pool as we watched the Super Bowl on a big screen in the middle of the South Pacific after spending a couple days in the crystal clear waters surrounding our over-water, thatched-roof cottage in Bora Bora.  His boomerang DID come back after a few tosses in Brisbane.  We raced rubber ducks in Buffalo Bayou and rode duck boats in Galveston and Chattanooga.  We hiked up to the top of Rock City and sailed from Clear Lake to Galveston Bay on our leased boat.  We watched sunsets in Key West after walking all around the island tracking Hemingway’s cats’ descendants.  And we’ve marveled at waterfalls and sunflowers and sunsets and palm trees in places too numerous and varied to imagine.  But it’s all in the scrapbook albums…..at least I’m getting there!  I’ve never been so happy to have this hobby and this community! 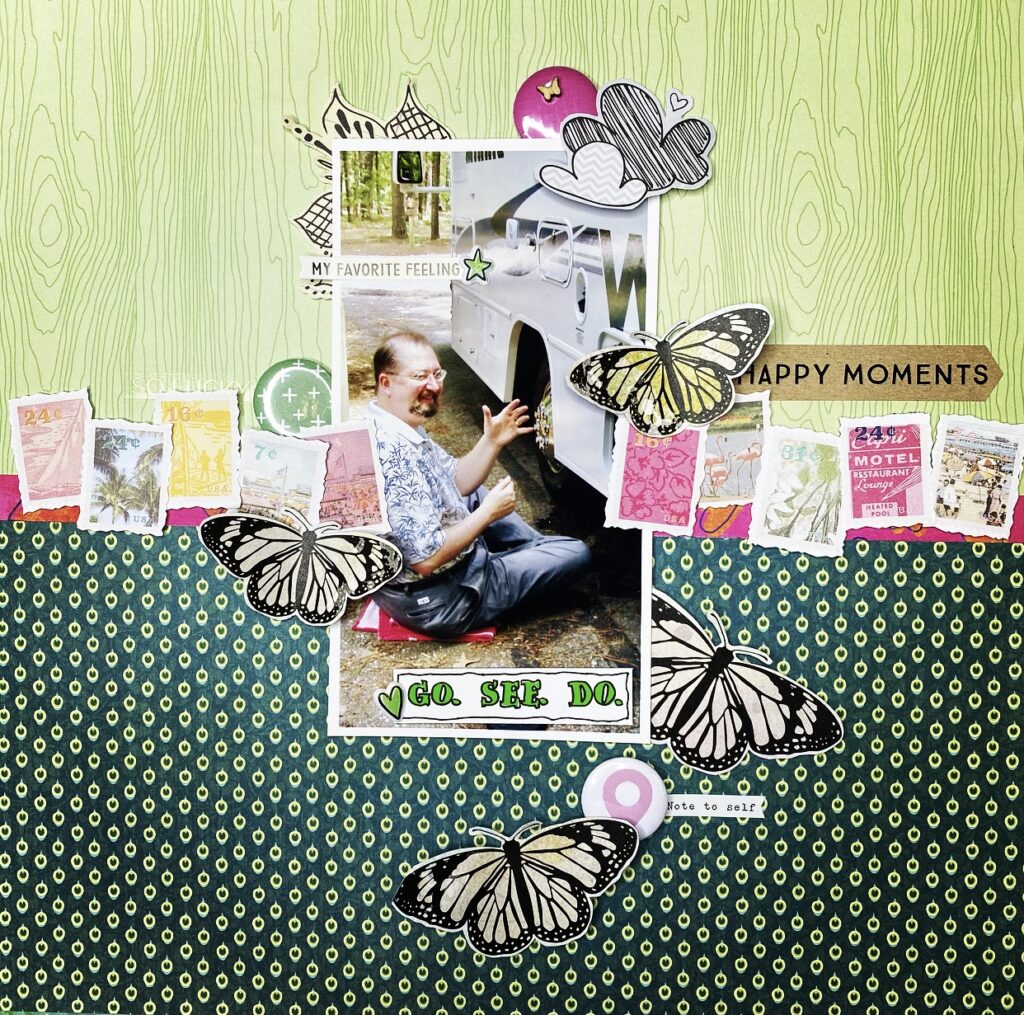 My Scrapbooks Are Living, Breathing Proof.....

I chose to close with this page, done earlier today, because it depicts a not-so-pleasant task associated with “camper life” and a brilliant smile on the face of the man who took care of such things.  I don’t think he ever imagined troubleshooting the black water pump on an RV but it was part of the grand adventure we embarked upon together in 1981, and he was in for it all.  Just a few days before he died he asked if I thought we could count on being able to travel this year to celebrate our 40th anniversary.  We’d cancelled a Grand Canyon trip when National Parks closed due to the federal budget shutting down, and again when Ava was fighting leukemia and then again due to Covid.  And he really wanted to get back to Texas.  We did a little planning for another road trip hitting Texas on the way to Arizona and catching baseball games in ballparks we’d missed on our 2016 grand tour.  So the family will be heading out on a tour in late June, first to our home-away-from-home in Margaritaville in Pensacola, then to Louisiana and to several destinations in Texas — a celebration of his life in some of his favorite places among family and friends.  We’re calling it the Kokomo Tour after the fictional “state of mind” described in The Beach Boys song.   Then in September I’ll embark on a different road trip myself, first to a scrappy retreat and then to visit scrappy friends and to (finally) take John to the Grand Canyon.  I’ve made a mini-album in a Vicki Boutin class that’s just waiting to be filled with more reflections on this adventurous man’s life as we set out seeking sunflowers, sunsets, waterfalls and any other outdoor wonders that make us feel closer to him. And I consider my 100+ albums to be precious treasure, and proof of all the moments, big and small, worth recording in a life well-lived.