Is Your Pet Story Also Your Life Story?

Why haven't I done more pet-scrapping?

As I was preparing for this blog post I searched for photos of pets I’d had and for pages I’d scrapped of them.  I found pics of the most memorable pets who’ve helped shape my life and some recent layouts but I don’t think I’ve done a good job of telling their stories — and that means part of my story is untold as well.  I clearly need to tell those stories.   For this blog post I’ll sort of list them in timeline fashion and try to give examples of the significance of the stories I coulda/shoulda/woulda told…. 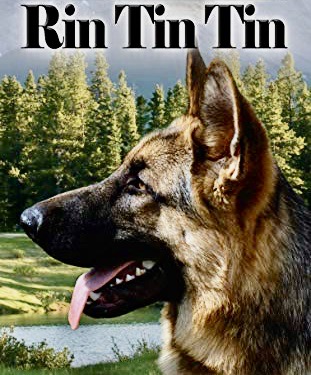 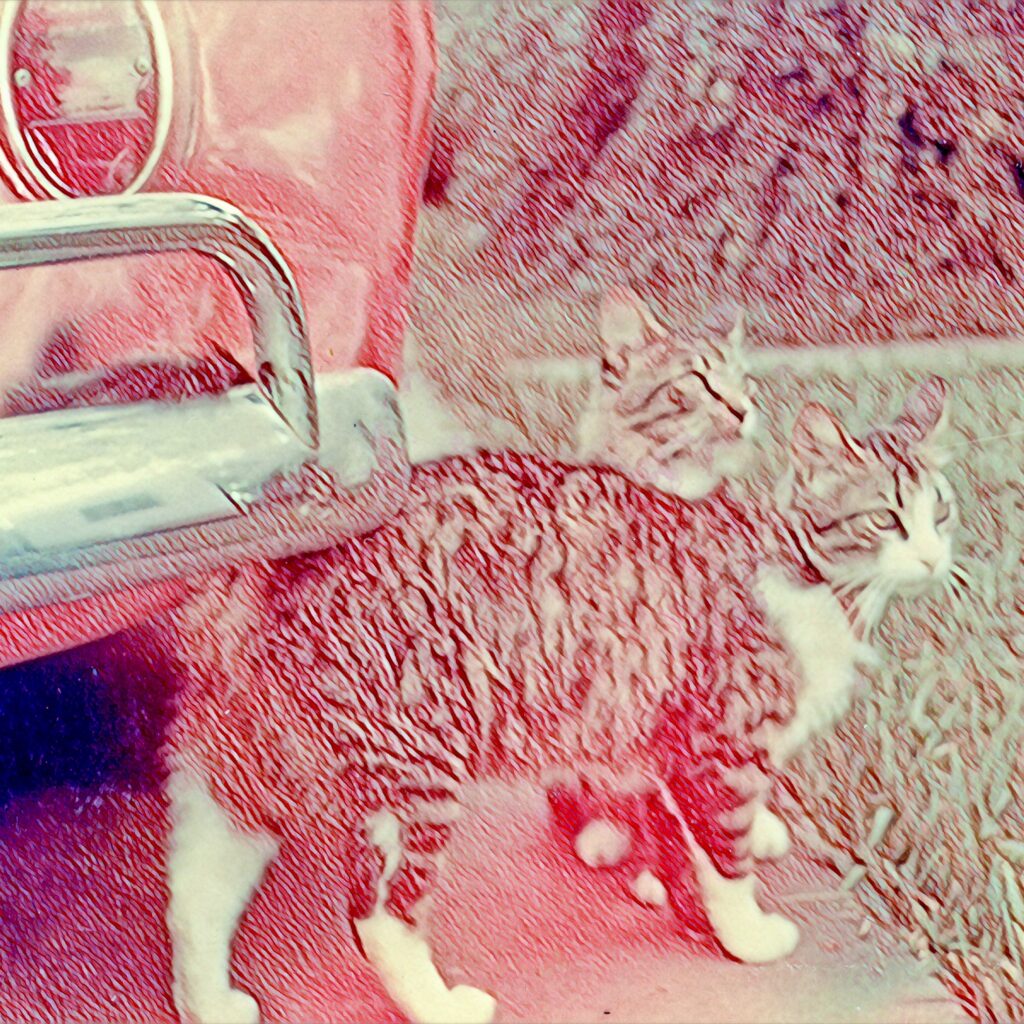 So I named my brindle cat Rin Tin Tin

Like most kids in the 50’s I was in love with Rin Tin Tin and Lassie and I begged my parents for a German Shepherd or a Collie.  Instead I got (and was THRILLED to get) a rescue brindle kitty whom I named Rin Tin Tin.  The kitties above are descendants of Rinty and I think they’re the earliest photos I have of childhood pets.  I could tell stories about how I crawled under our house to find the kittens that had been born and safely hidden away in the foundation blocks at the corner of our house.  SO many stories.  There were the cats that had kittens on our furniture when Hurricane Audrey blew our door open and they sought refuge in our living room.  About the part Pekingese, part Cocker Spaniel dog who had 8 puppies on the middle part of the sectional.  About how I named her Frisky and she was always smiling and as she followed me to school people would stop and comment on how cute she was. And there was out next-door cousins’ cat Fluffo who’d had kittens and was available for nursing a few baby foxes my uncle had found beside their mother who’d been hit by a car…..So many stories that I haven’t yet told but will do soon…. 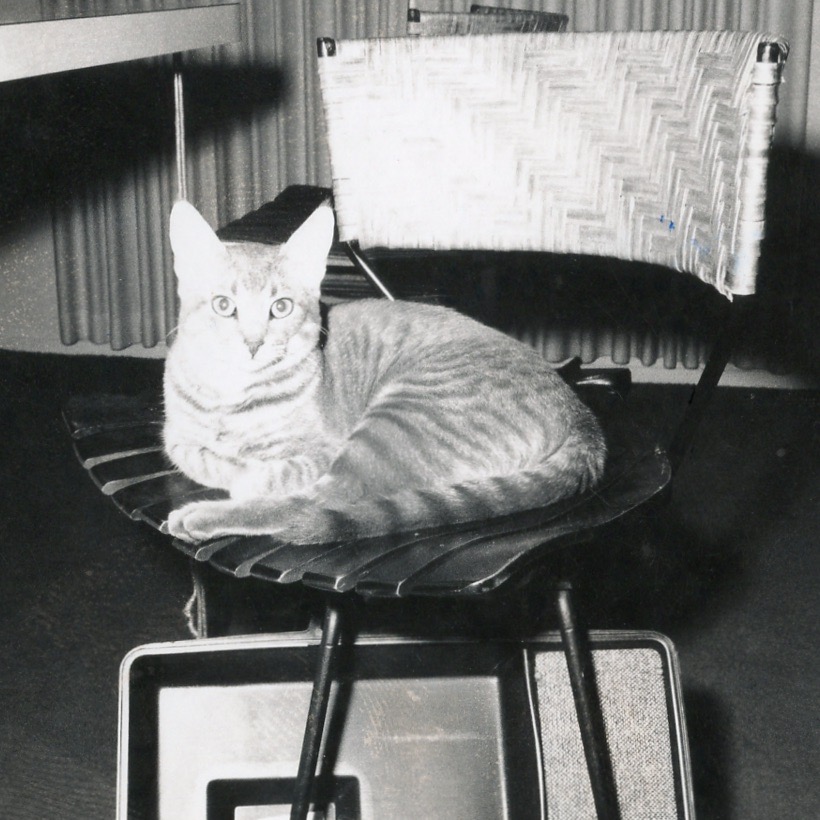 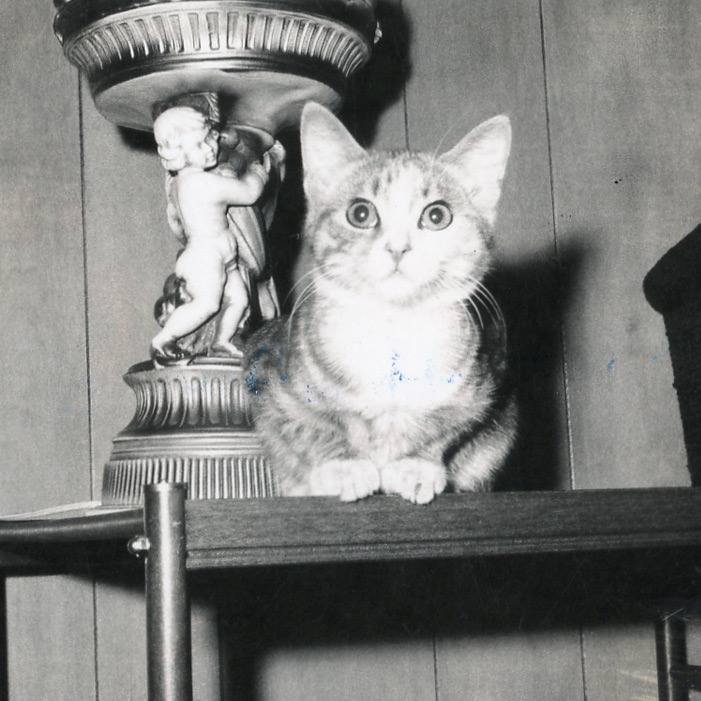 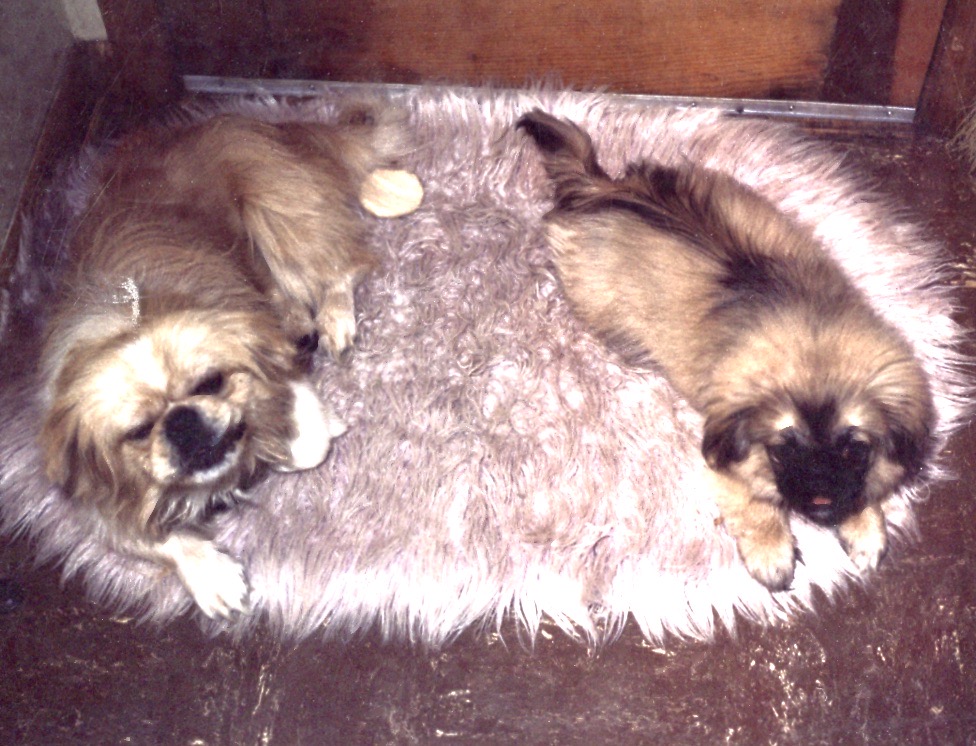 Theophile was a grey brindle I brought with me when I moved away after college and Mittens was a brindle calico who moved in later.  Hop Sing was a Pekingese who adopted me at a pet shop and Little Chunk was a Pekingese puppy who joined the menagerie at the horse ranch in Tulsa where I live with my first hubby and a slew of cats and dogs and where I turned racing colts into pets to my hubby’s dismay….. 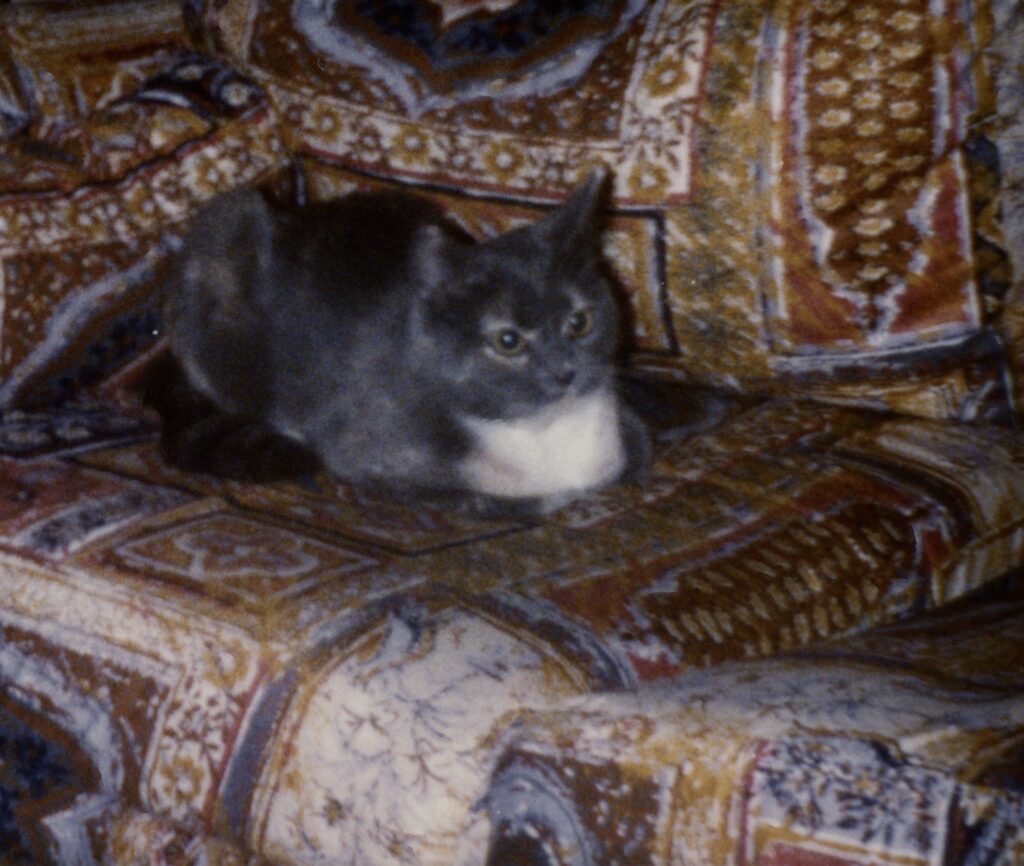 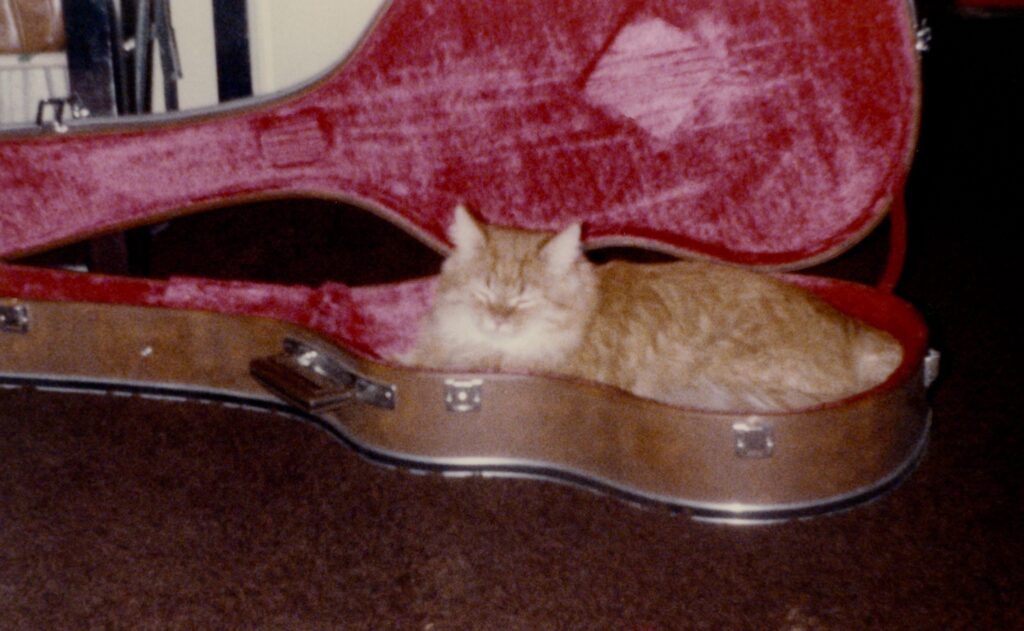 Sugar Bear and Freddy were kittens from the same litter of a Rinty descendant back home and they joined the family after James and I had moved to Houston from Tulsa. Sugar Bear looked like a Russian Blue and Freddy, like a pure-bred Persian — signs that there must’ve been some exotic new blood in the neighborhood.  SO many stories about these kitties and a single mom raising a little boy while building a career and trying to keep the kitties out of her friends’ guitar cases when they came to play at parties! 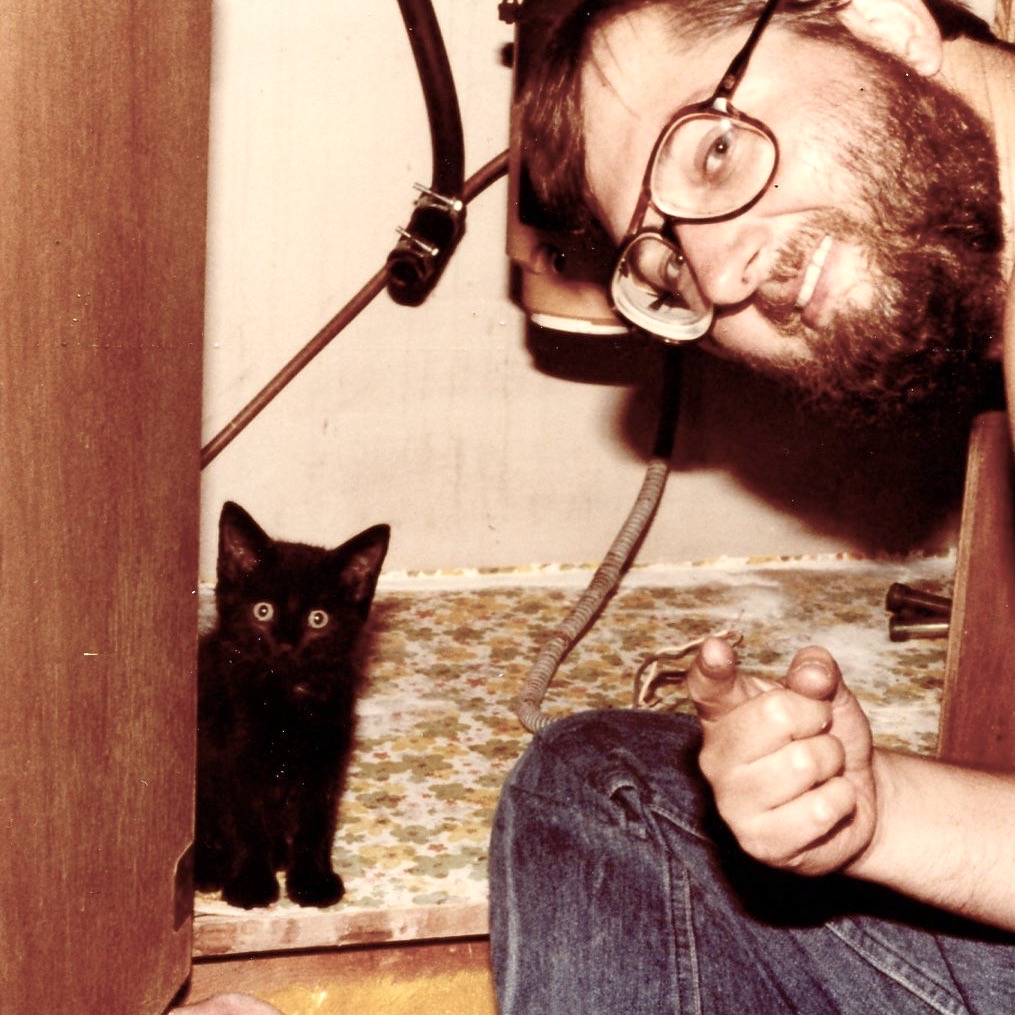 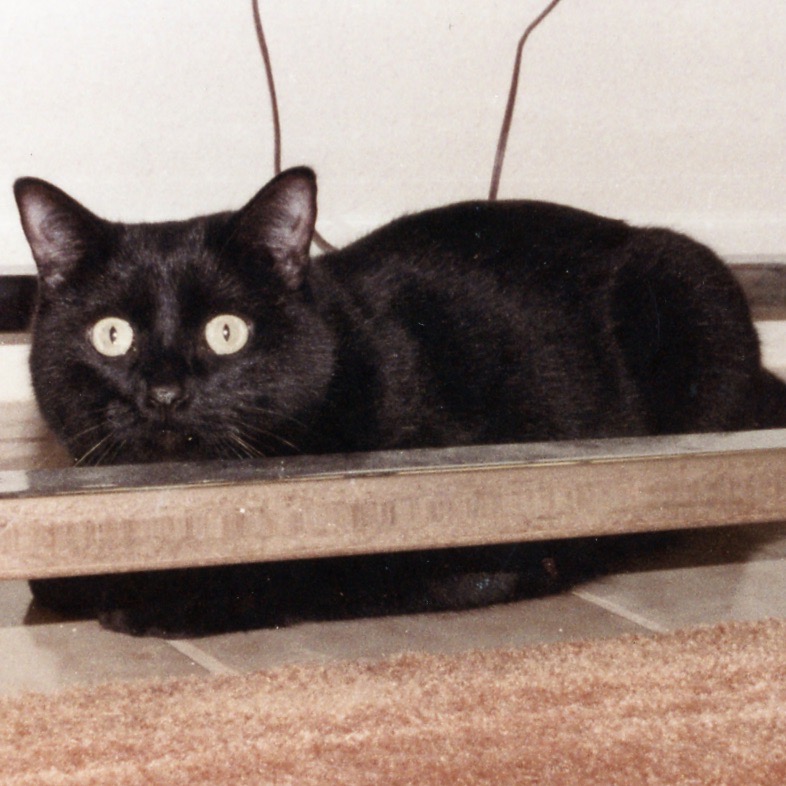 John admitted he didn’t care much for cats and I must’ve really loved him because that was a pretty big show-stopper for me!  His office mate at work offered one of a litter from her cat so he surprised me with a new kitten who promptly escaped from the house and ran away, never to be found again (by us, anyway).  So off we went to the SPCA to pick out a replacement and they showed us a pile of sleeping kittens the manager had rescued from the side of the road weeks before.  Suddenly one awoke, jumped up and leapt over his sleeping brothers and sisters and ran straight into my arms.  We named him Ignatowski after Christopher Lloyd’s character in Taxi and he was the most adorable tiny ball of fur you could ever imagine.  SO many stories…..like the time a window repairman fell off his ladder while replacing a window because Iggy strolled in — all 27 lbs of him — and the guy thought he was a panther! 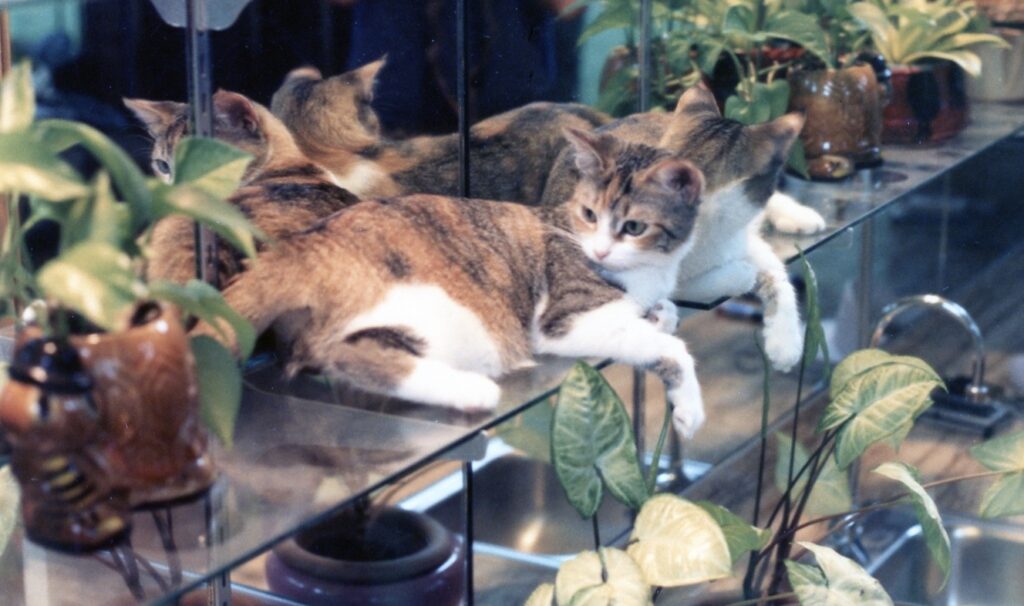 Spike wasn’t a conscious choice but she was a wonderful addition to the family.  Iggy didn’t think so.  We’d found a newborn kitten under the stadium seats at one of James’s school events, barely alive and abandoned by a mom who’d been surprised by the rush of kids released at recess.  We managed to keep little Bobcat alive for 3 weeks but even with the help of Dr.  Joe, our amazing vet, she didn’t pull through.  So a friend offered little this little bundle of sweetness and we took her home to meet Iggy.  As I said, he was not impressed.  She persisted and a truce (if not an alliance) was formed. 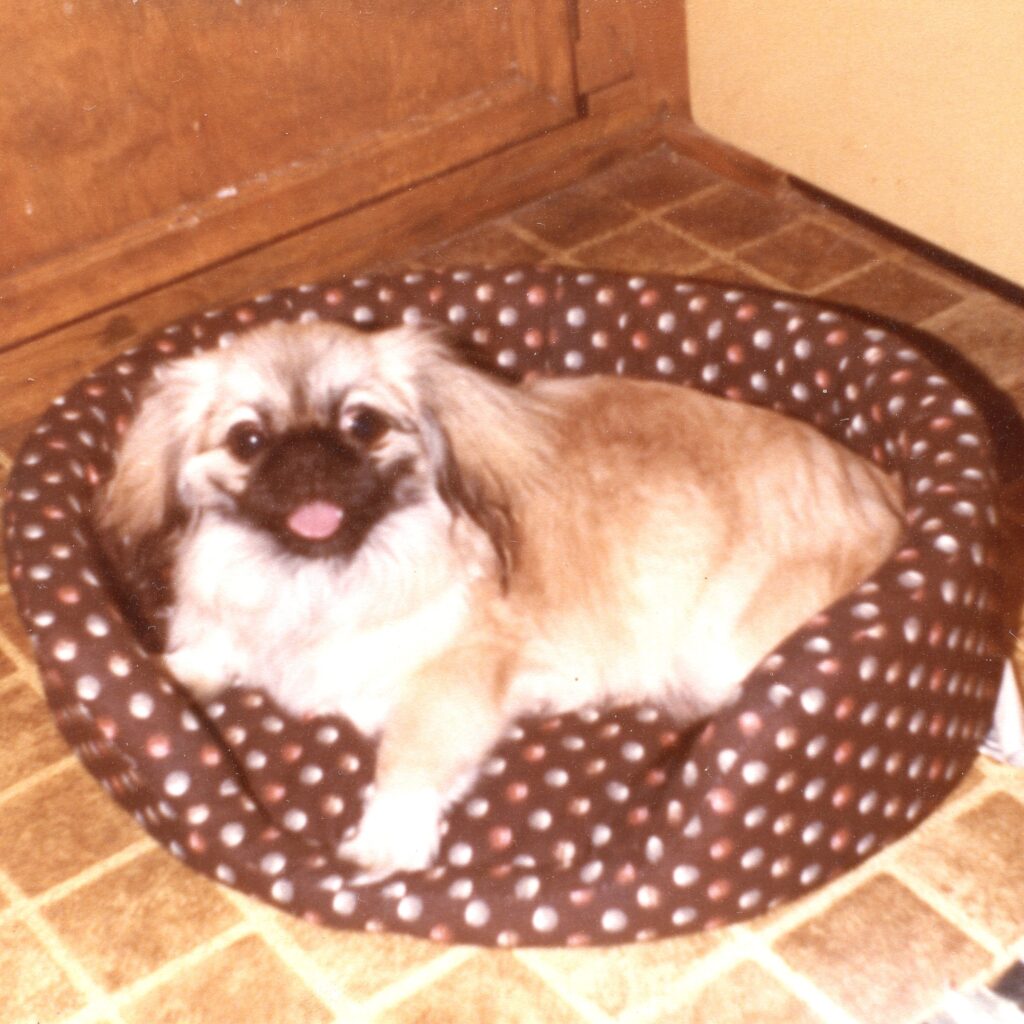 The story of how Poopsie Q. McElfresh came to join Iggy and Spike also hasn’t been told and it needs to be.  She weighed 1.7 lbs when I saw her in a mall pet store (NOT the best place to buy a puppy, I’m afraid) and it was love at first sight.  BEST.  PUPPY.  EVER.  Even as a fully-grown dog she wasn’t more than 6 lbs and she was SO perfectly well-behaved and (like Frisky before her) she seemed to always be smiling.  Like Spike, she persisted in her pursuit of friendship with Iggy and he resisted for longer than expected but she wore him down and he gave in.  These 3 are so key to the story of our young family: the 3 of us & 3 of them. 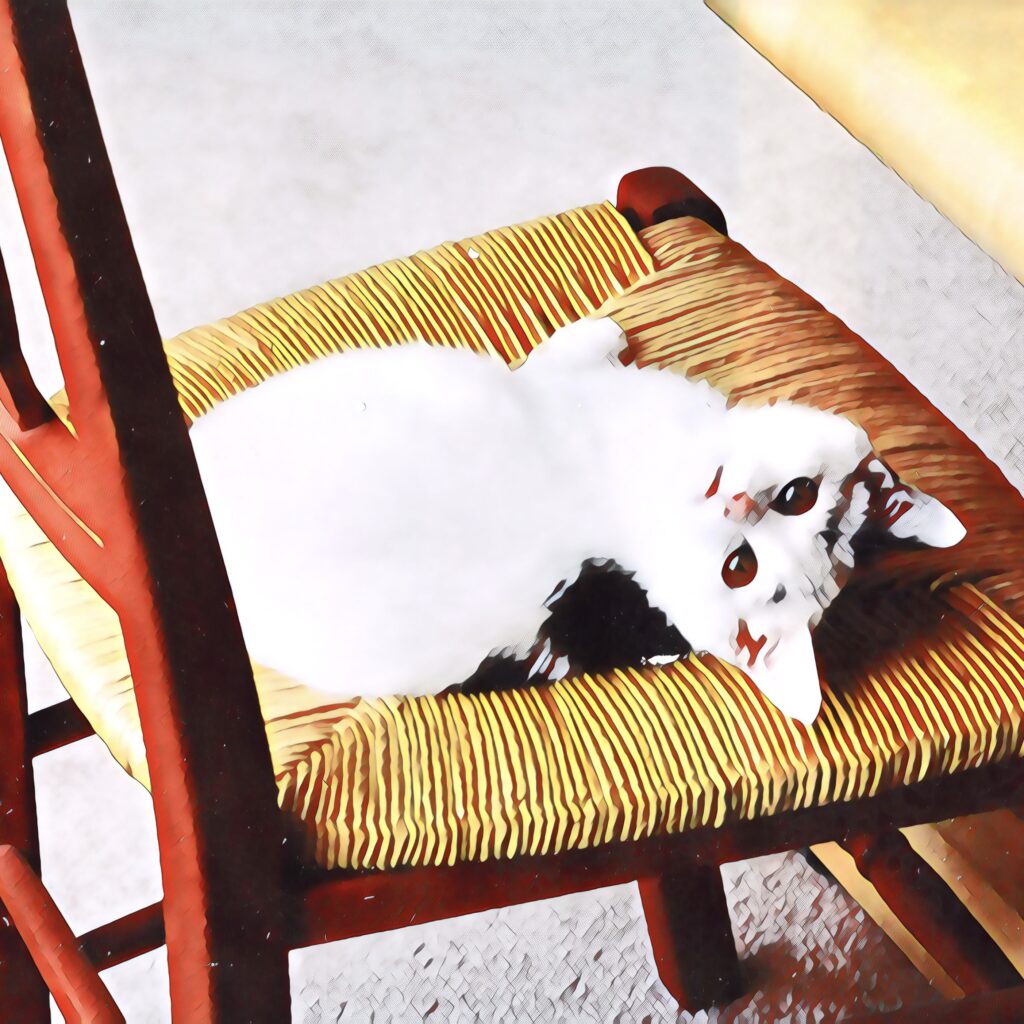 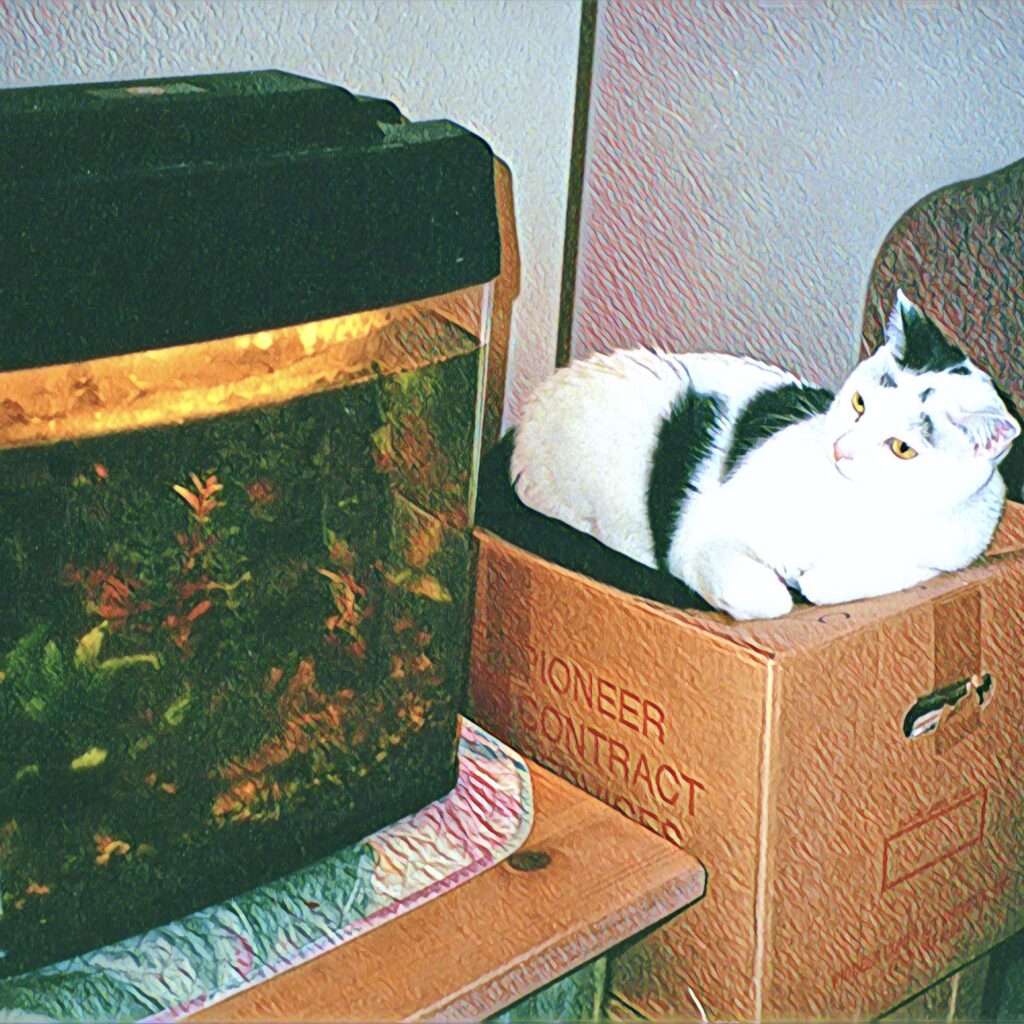 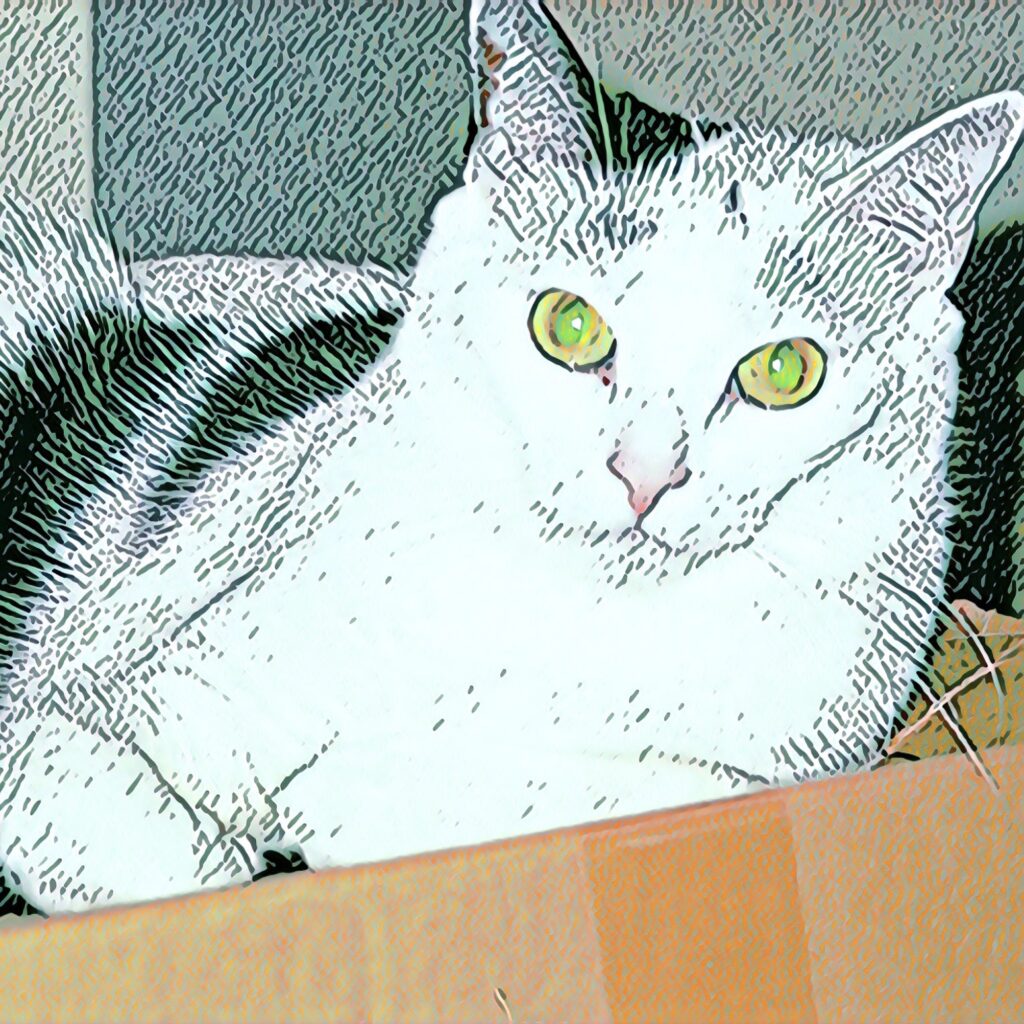 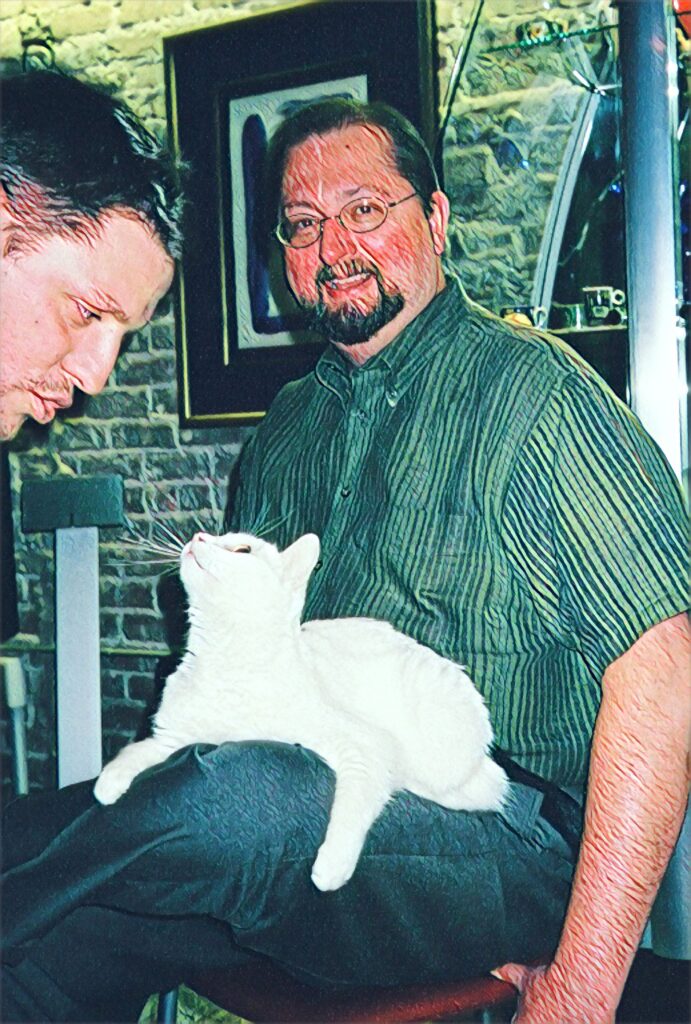 Scout filled our empty nest when James left for the army (yep, he was a cavalry scout) and he, like Iggy, was definitely John’s cat!  He moved with us to Brussels and back to Houston and then to Georgia.  He’d had the run of our place while we worked and was used to just the two of us for so long that when we retired and moved near the grandkids it was a bit noisy and chaotic for him and he enjoyed the fact they usually went home to their parents in due time!  I’d begun scrapping while Scout was alive and I do have quite a few pages featuring photos of him, but to be honest, I haven’t told many stories about the way he liked cardboard boxes way better than cushy beds or the way he’d retrieve and return wadded up paper and beg for you to toss it again or how he always knew when one of us wasn’t feeling well and he purred louder to comfort us — like when I broke my ankle and he always laid his paw across my cast.

Now that we live with James we have to be careful of his asthma  — we tried fostering a couple kitties a few years back but even though we’re on a separate air system his symptoms got worse.  So we had a few pet-less years until James found a breed of dog that doesn’t shed and is (comparatively) allergen-free.  At the urging of his kiddos this little crazy creature moved in  and life hasn’t been the same since. She’s a Coton-Poo, usually white but she’s got a mix of chocolate poodle and peanut butter poodle in her, so the kids called her Reese.  She’s sweet and loving unless she feels like barking or growling for no reason and she’s rather poorly-trained and hates her leash but loves going for walks and there’d better not be an open trash can full of paper trimmings and backings of pop dots when she comes down with the family at dinnertime!  When John was ill and hospitalized for 6 weeks she would not be quieted as she ran around our area looking for him in all the places — his desk chair, his spot on the couch or his side of the bed. She was SO excited when he came home . 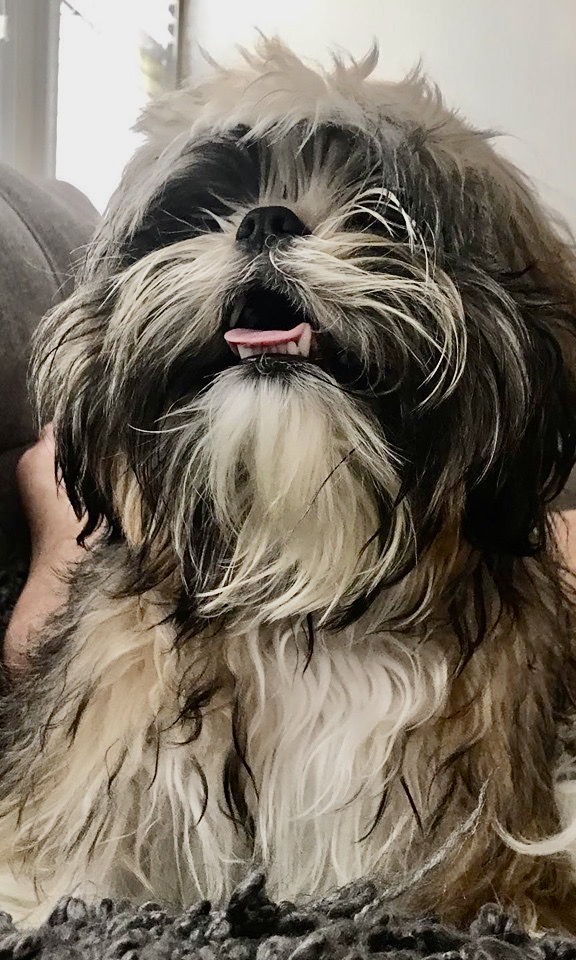 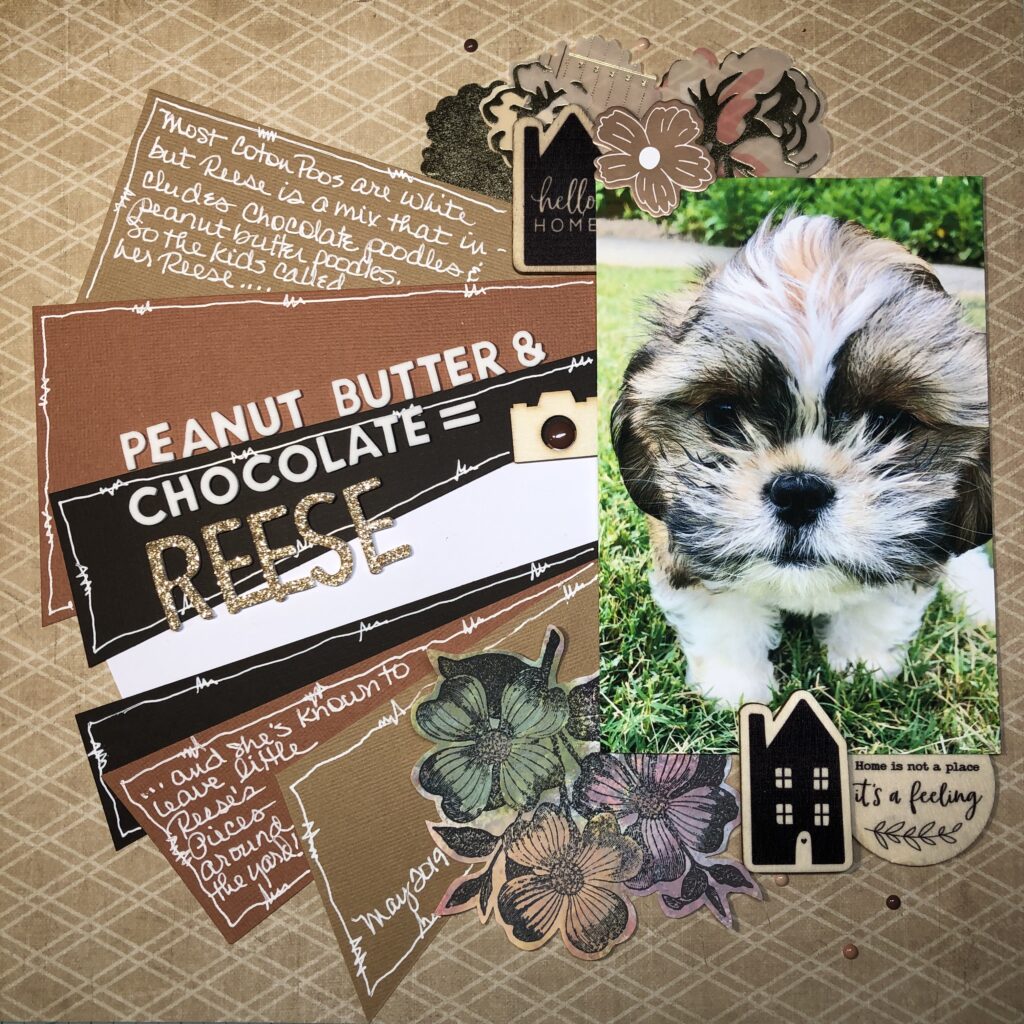 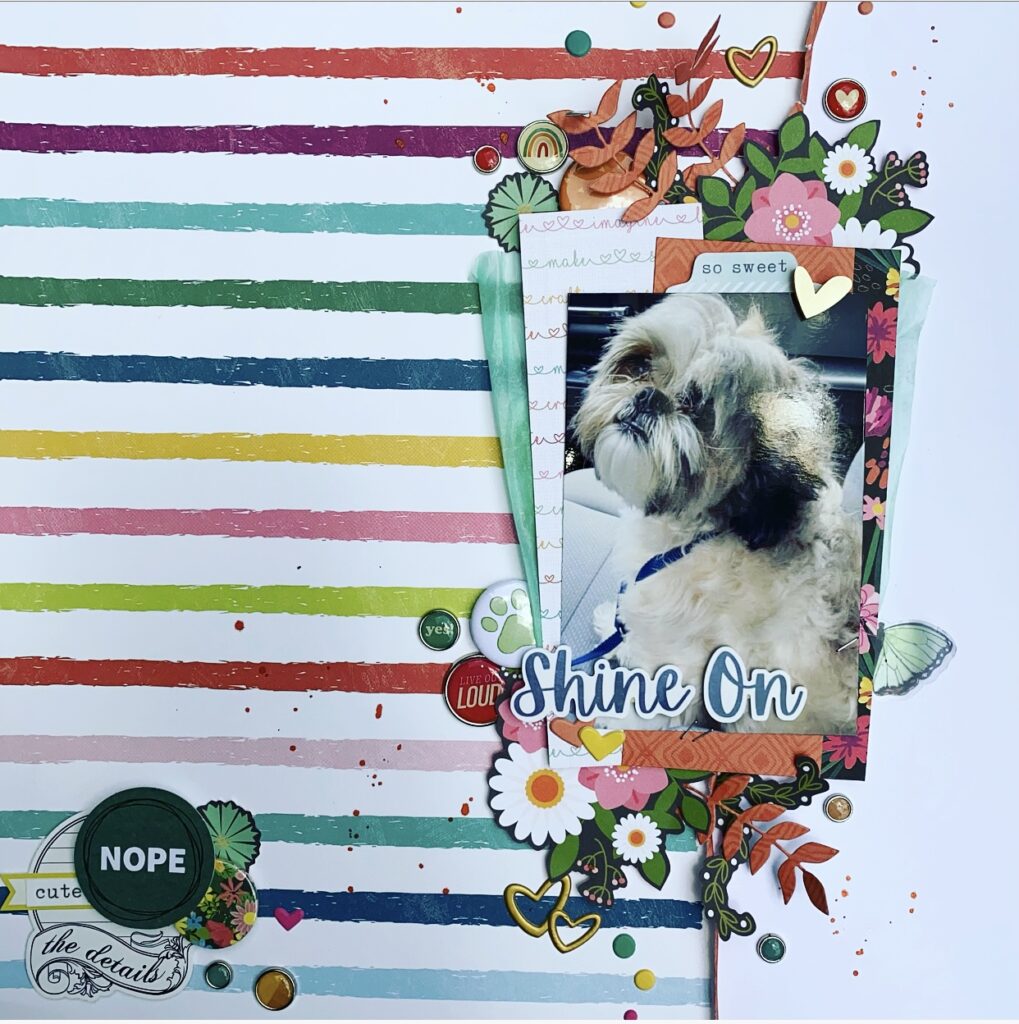 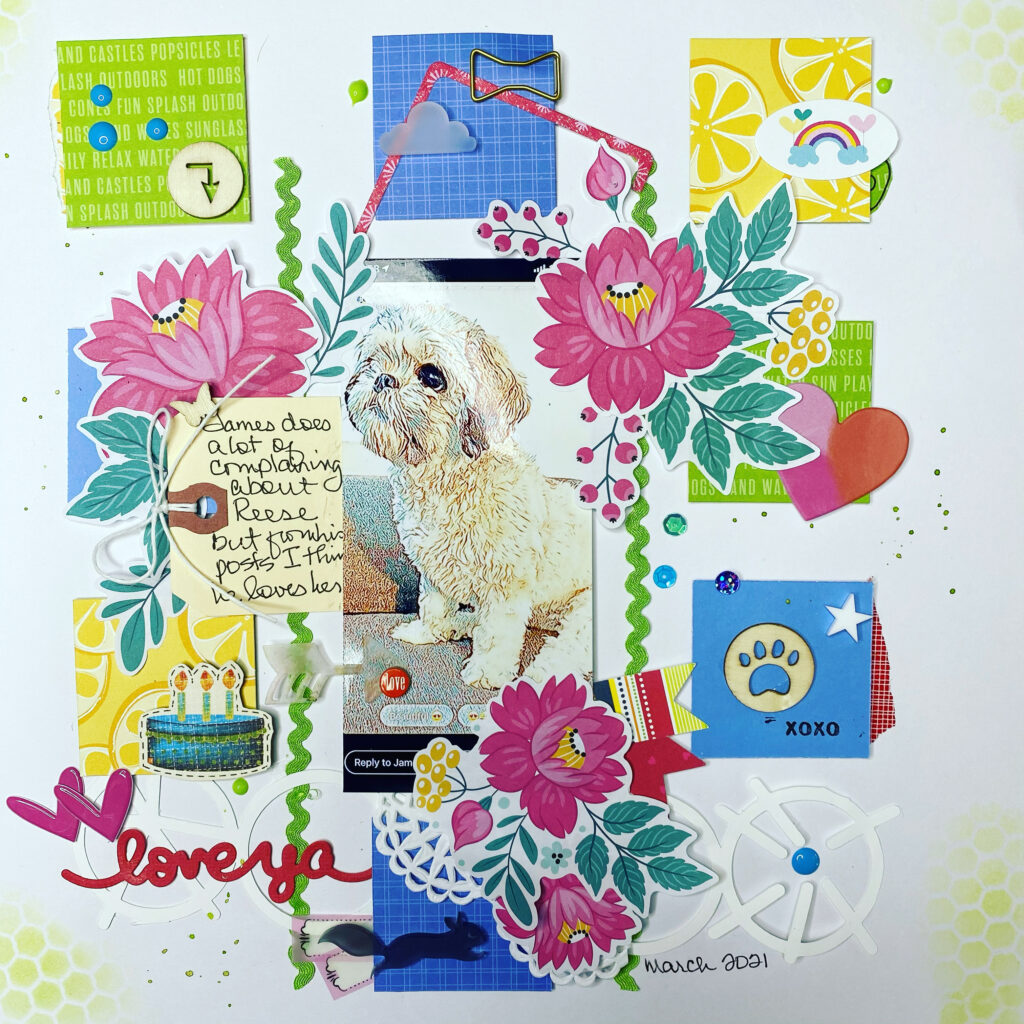 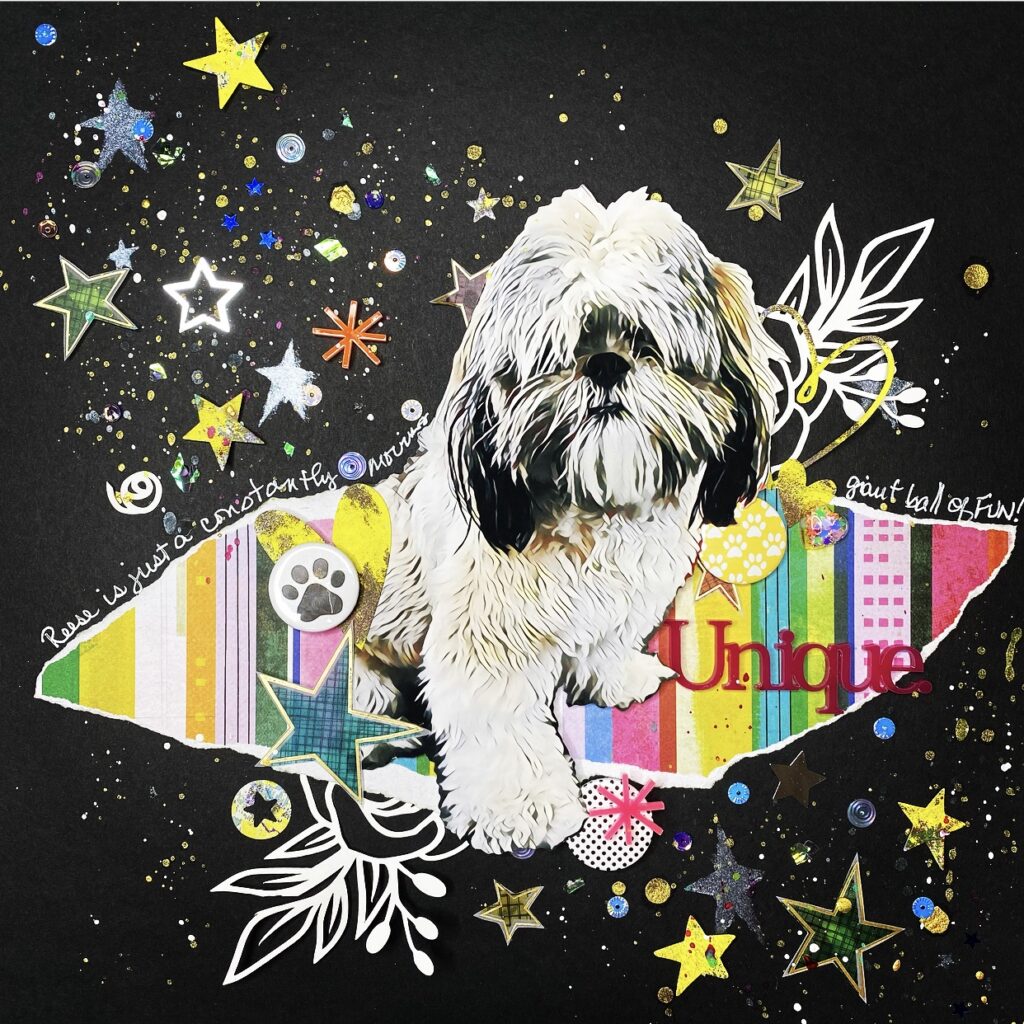 A Scrapbook and Social Media Star!

James is a bit of a “scrapbooker” given that he loves taking photos and telling stories in social media posts.  This drives his kids nuts now that they’re older so he posts a lot about Reese!  Likewise I tend to scrap photos of her a lot.  But I typically don’t tell much in the way of stories about her — and there’s a lot about US that isn’t being told when I leave those stories out.  Pets aren’t exactly family members but the lives of family members are shaped by and carried out alongside their furry friends — some situations and stories about ourselves just might not ever be told if not from the pets’ points of view…  So I hereby resolve to go back and scrap some of the older memories and also to do better with my journaling on pages about Reese.