It recently occurred to me that I could create an entire album, not just a page or two, of the ways music and song are recurring themes of connection in our family. Music is woven throughout so many of my memories from childhood through to present day. Certain songs trigger intense emotions. Everything on the spectrum from annoyance, apprehension, and sadness to joy, love and acceptance. Instantly, I am transported back to that memory. It is not always an intense emotion, per se, but it can be one where I recall the connection to a loved one on a deeper level.

Emotional responses to songs can help us to be grateful for the good times.

There are particular songs that come on the radio that I cannot bare to hear (so I quickly change the tune). That song was probably played incessantly by radio DJs during tumultuous family and teenage years. It could be a lovely song that others appreciate, but I simply cannot bare it because my brain heard it repeatedly while my emotions were in upheaval. Certain songs from the early to mid 80s fall into this category, such as Don’t You Want Me by the Human League (1981-82), Total Eclipse of the Heart by Bonnie Tyler (1983-84), and Boys of Summer by Don Henley (1984-85). These may be beloved songs to some, but my tense reaction is so uncomfortable that, to this day, my family knows to turn them off if they come on. I do often wonder why other songs of the same time period don’t have the same negative effect. Human brains are such incredible mysteries. Does anyone else experience this so profoundly? Do you choose to scrapbook the hard stuff that builds character along with the upbeat stories? Sometimes these narratives nag at me enough that can’t help but create a scrapbook page or entry in an art journal in order to release them.

Document those fleeting stories about lullabies.

Thankfully, there are many more songs that evoke positive emotions, sometimes even tears of joy or goosebumps with every listen. Lullabies sung to my precious babies nightly for a number of years are imbedded into my brain along with the visuals of angelic sleeping faces and also sometimes the scents, such as lavender baby lotion. In 2014, I created the following 12″x12″ all digital layout in Photoshop. It was about the lullaby I sang regularly to our son when he was a wee lad. The song was Godspeed by the Dixie Chicks. He did not like bedtime. When I started singing, he would, as a toddler, usually ask me to stop-stop-stop because it was the dreaded signal to calm down for sleep. For some reason though, he loved this song and would gaze at me lovingly with those big brown eyes and sometimes even sing with me. ( I’ve done it to myself already. Happy tears. Where are those tissues?) 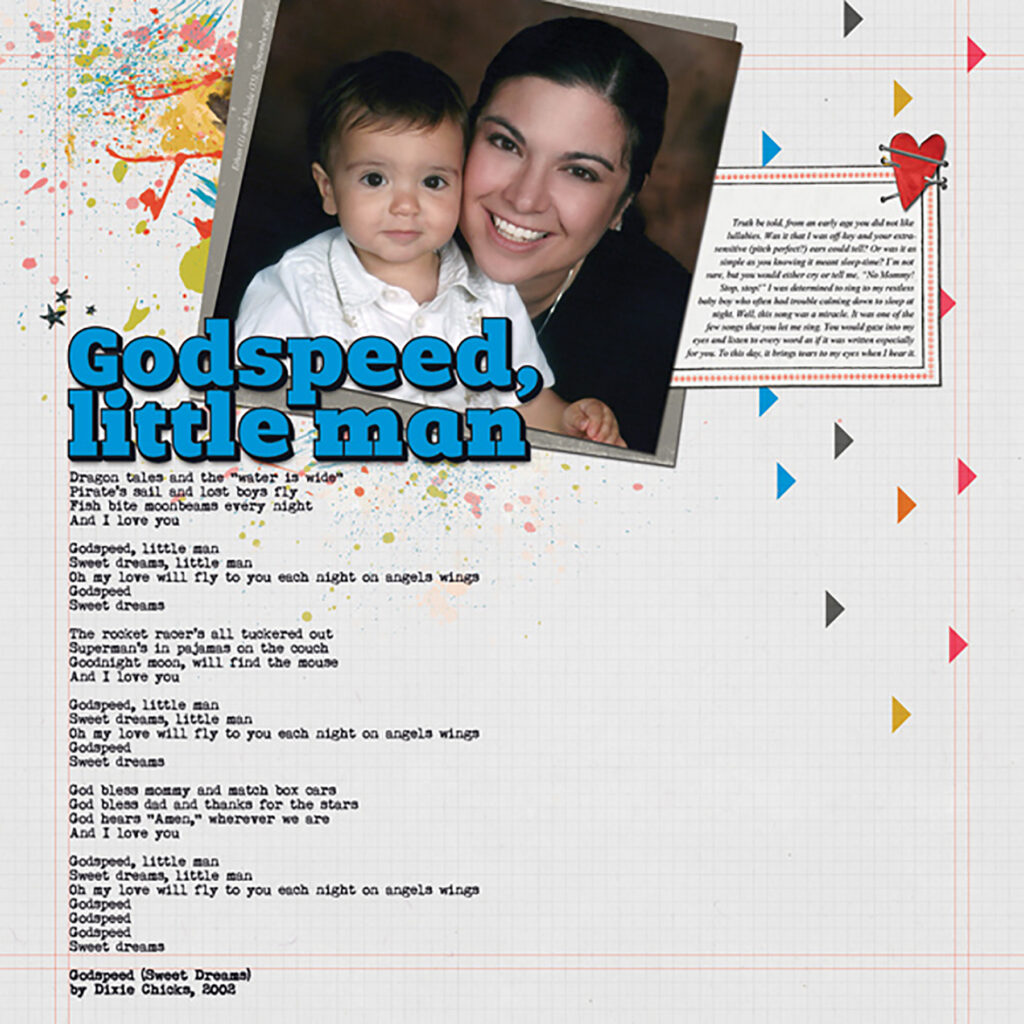 The song that most strongly brings me back to first born daughter’s young days is definitely Part of Your World from the Little Mermaid soundtrack. My husband and I saw it (as high school girlfriend and boyfriend) when it came to theaters in 1989, and it became a cult classic for us. We listened to the soundtrack incessantly, so therefore, I knew those songs inside and out. Once we had our first child, they naturally came to my mind after a long, tiresome day. As she grew up, our daughter fell in love with that movie and the music as much as we did. At nearly two years old, she would call her grandparents and confidently sing all the lyrics to Part of Your World to them over the phone. And yes, her third birthday was the Little Mermaid theme and she dressed as Ariel for Halloween that year too. Over the years, she has also introduced me to some great current music of her generation. We bond over albums by Bruno Mars, Khalid and the entire Hamilton Soundtrack.

Stay connected to teens through their musical interests.

Music continues to be the best way we stay connected to our teenage son because he is at the stage where he does not communicate freely. If I feel disconnected from his world, I simply ask him to play me his current favorites when we are in the car together. We usually end up having deep discussions about his thoughts on musicians and songs I never heard before, but appreciate. It deepens our connection and I learn new things. Win-Win! He introduced me to Jason Mraz songs, among many others that I had never heard. I did this layout in my 2020 travelers notebook about his personal connection to the song, 93 Million Miles. (Side note: when my son plays music that interests me enough to wish to hear it again, the quickest way to capture it is to use the Shazam app on my phone. Then, with the press of a button, it connects to Spotify, where I can save it. If I am driving, I can ask him to Shazam it, then save it to the playlist I created called, New Bands.) 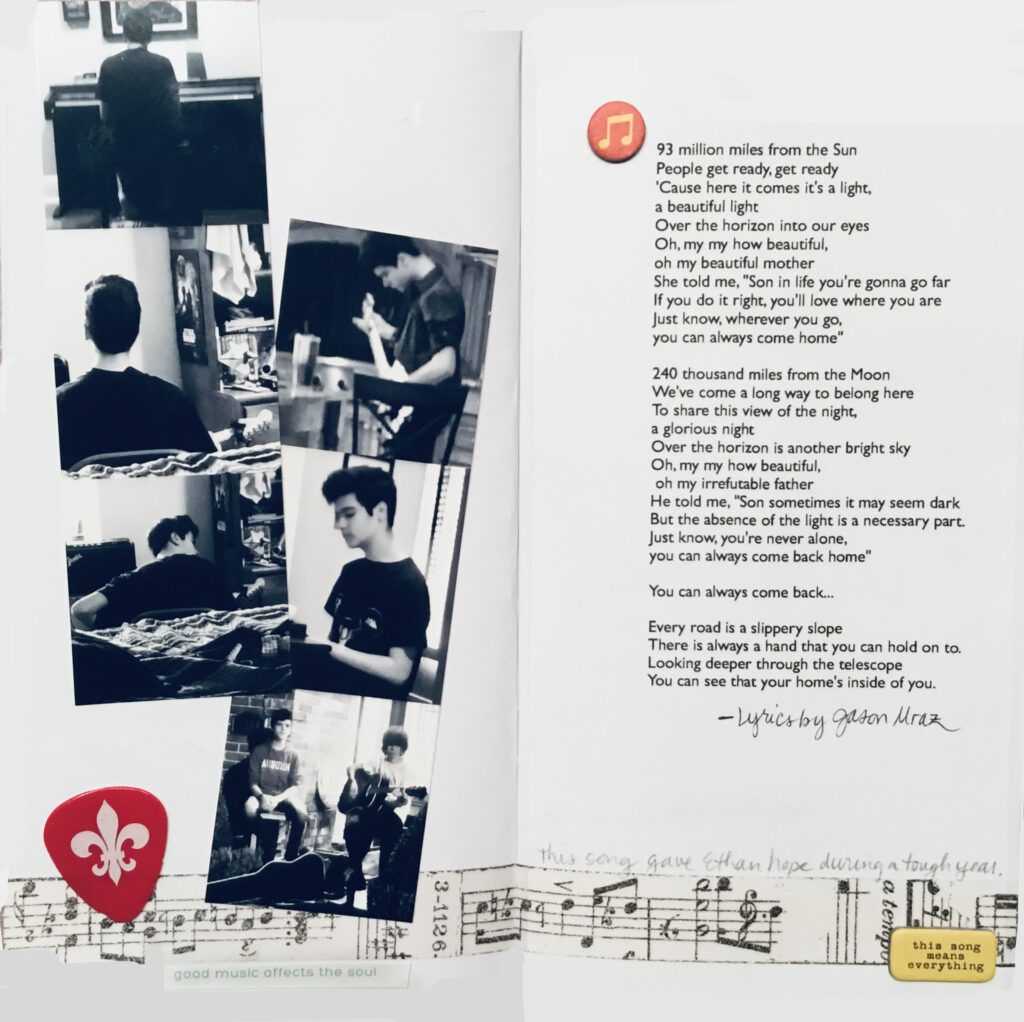 Christmas music is a bond between multiple generations.

I cannot end this post without touching on Christmas music. My December albums include at least one page with a Christmas song-related memory. Both my dad and grandmother were role models for embracing the joy of holiday music. We tend to be ready to start listening to it the day after Halloween (sometimes sooner). Time will tell if either of my kids carry on this family tradition into the future. Below is a 6″x8″ page from my 2016 December album, designed with Adobe InDesign, using some of Ali Edwards’ digi elements. 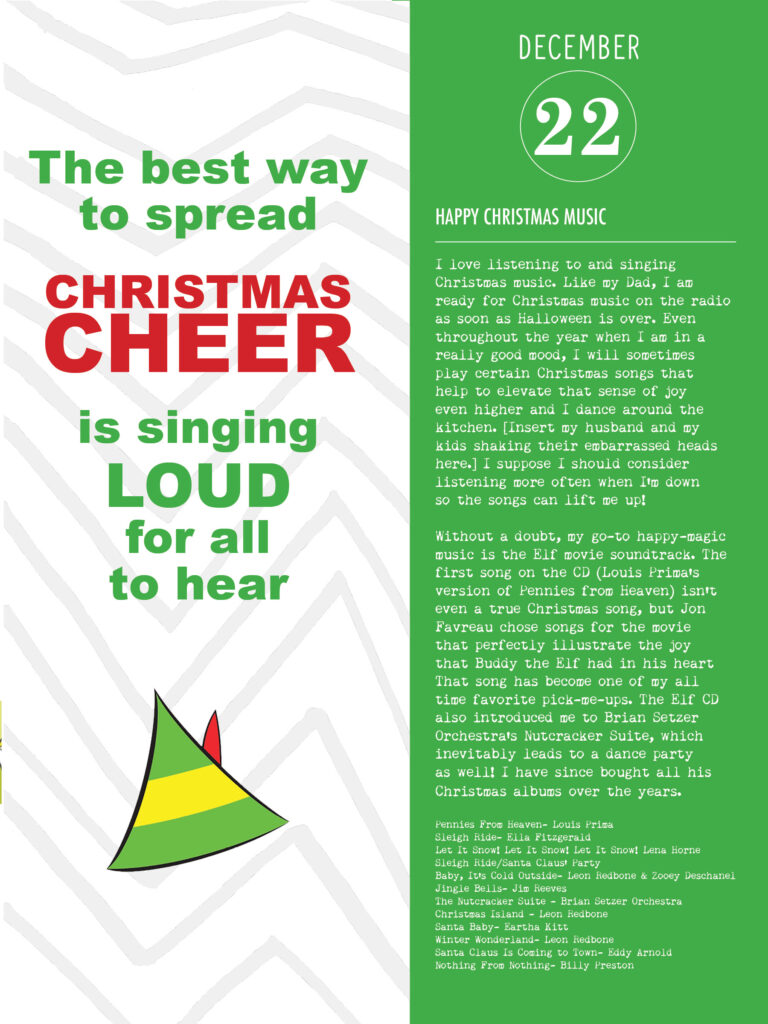 Beyond December Daily: other approaches to documenting the holidays.

Have you seen that Traci Reed Designs is promoting a “December Daily In Song – 31 Christmas Carol-Themed Prompts for your Album” on her blog? It looks like a unique approach and certainly a good way to record a family’s musical traditions. Have you signed up for Alice Boll’s Scrapbook Christmas in January, yet? Once signed up, you receive 25 daily emails throughout December with prompts and easy, doable tasks. Then another 25 emails in January, after the stress of the holiday is mostly past, to work within the community to complete the pages. This would be a great way to incorporate those music stories from the past year as well. Go to  https://sales.scraphappy.org/christmas/  and use discount code MYGIFT to sign up for this course.

What are the ways that music keeps you connected to loved ones, not only during the holidays, but in those everyday moments?

1 thought on “Remembering the Way Music Connects Us”